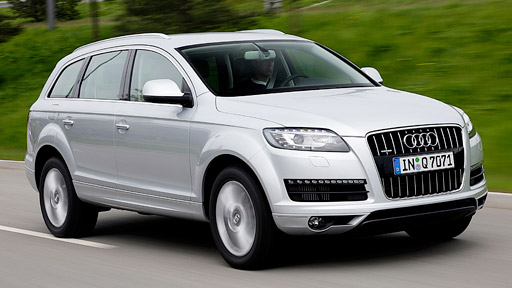 The Audi Q7 is a full-size luxury crossover SUV unveiled in September 2005 at the Frankfurt Motor Show. Production of the Q7 began in autumn of 2005 at the Volkswagen Bratislava Plant in Bratislava, Slovakia. It is the first SUV offering from Audi and went on sale in 2006. (wikipedia).

During the video, you’ll see the car being slotted into ‘Dynamic’ mode, after the driver was done playing around with the Virtual Cockpit, and then it’s pedal to the metal. The reason why we say the Q7 is quick when it comes to this engine is, well, by comparison to everyone else.

And finally, let’s throw the VW Touareg 3.0 TDI in the ring, the 262 PS version. That’s a lot more power than any of the previously mentioned SUVs, yet it’s what the Touareg needs in order to accelerate to 100 km/h as quickly as the Audi Q7.

So, in the tired words of Charlie Sheen, that’s how you do ‘Winning’.