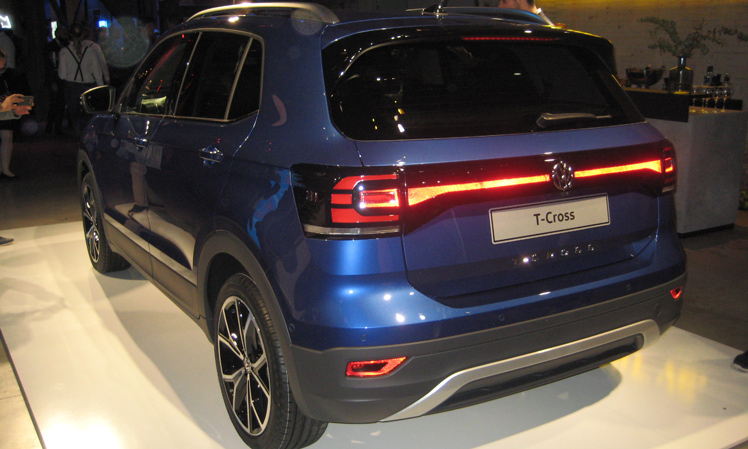 A few days after its official presentation , the Volkswagen T-Cross is already on the market, but only in the form of a First Edition launch series for the moment. This special edition, to book online, will be produced 792 copies. Volkswagen has also integrated on the web page dedicated to the model a counter indicating the number of remaining copies. At the time of writing, there are still 768!

The T-Cross First Edition receives a white color “Pure White”, special adhesives on the custodes and hulls of black mirrors. It takes care of your eyes with 100% LED headlights and also boasts 18-inch wheels and anodized roof bars. On board, the seats are adorned with a specific upholstery.

The main touches of originality of the T-Cross are on the back part where a banner running across the entire width of the hatch draws the eye, especially as it incorporates LED lights with a unique design. It is the same for the front part where the projectors are positioned on two floors.

Developed from the MQB A0 platform (the same as the Polo), the T-Cross is 4.107m long. It will take root, therefore, at the heart of the urban SUV category.

The interior is, unsurprisingly, very close to that of the Polo 5 and the T-Roc. The T-Crossl would be, thus, faithful to the current trend with a little more fancy thanks to color reminders of the body at the steering wheel, the center console but also the headband of the dashboard. The latter will offer seven different decorations depending on the finish chosen.

Arriving much later than the majority of these opponents, the smallest VW SUV will have a trunk load of between 385/455 liters (1,280 liters with ka rear bench folded). The rear space should also be very interesting, whether in the knee space or the roof guard, thanks to a wheelbase of 2.563 m and a height of 1.558 m. A height that allows him to have a roof clearance of 1,036 m in the front and 0.968 m in the back.