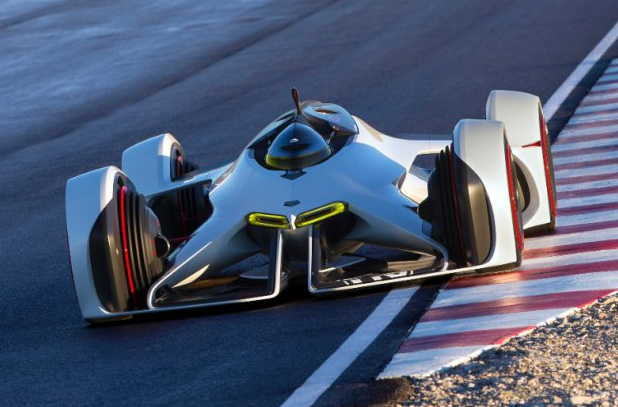 In the 1960s, Chevrolet did not have official sponsorship or involvement in racing, So there’s all this mystery and intrigue with the relationship that Chevrolet had With Jim Hall and the Chaparral. It was kind of a research association and development, Certainly they helped us a good deal, and I think we helped them. I think it was a good interchange and I always felt really good about it. It was a fun time in my life to work with a bunch of guys who wanted to find out, And that’s what I was interested in: learning about how to make them go better.

That spirit of innovation, the spirit of exploring the unknown, Is really what defined that relationship between Chevrolet and Chaparral. And that’s really the storyline that we wanted this project to revisit – What could be? The flying suit was a very strong inspiration for me. Headfirst, belly on the ground, and having a sense of flying, just inches from the racetrack, Was, to me, the best and most exciting position I could find for a race car. I said, the amount of thrust, the amount of downforce, Let’s make sure this car’s got the performance it needs to be a winner.

We always prepare the physics for each new car that is in the game. But the 2X is moved by laser propulsion, A completely new propulsion system that’s never been seen on an automobile before. This had to be developed from scratch. Through the whole process, it was very unique because the game is digital And our design process was extremely digital on this vehicle. So we knew it would look pretty good in the game, and I think what we were looking for Was something innovative and would pay homage to Chaparral.

Revealed Wednesday at the Los Angeles Auto Show, the concept uses the name of one of Chevy’s historic racing partnerships, with Chaparral Racing, which dates to the 1960s. Chaparrals raced successfully at a range of levels, including IndyCar, Trans-Am and SCCA competition. But the history ends there, as the concept’s main purpose is as a racecar in a downloadable update for the PlayStation 3 game Gran Turismo 6.

Developed as part of the Vision Gran Turismo project, which celebrates the future of automotive design and innovation, the Chaparral 2X VGT concept is inspired by the innovative race cars Chaparral Racing and Chevrolet partnered on more than 45 years ago.

Gamers can race the Chaparral 2X VGT this holiday season by downloading an online update for Gran Turismo 6, the latest iteration of the best-selling PlayStation franchise that has sold more than 72 million copies worldwide since its 1998 debut.

“This concept is an audacious and ambitious vision – and one that demonstrates to a new audience how Chevy’s engineering and design teams challenge norms and explore the technologies of tomorrow,” said Clay Dean, executive director of advanced design. “It also an ode to a unique partnership that pioneered ground-breaking technologies that are used today on the track and the street.”

The Chevrolet Chaparral 2X VGT channels that spirit of innovation into a vision of what the future of racing could hold, with a radical form and an advanced, laser-based propulsion system.

“It was created in a no-rules atmosphere to challenge designers and test engineers to deliver the most exhilarating sensations. This is a fantasy car by design,” said Frank Saucedo, who oversaw the team that worked on the concept. “Like the original Chaparral race cars decades ago, the Chaparral 2X VGT weaves advanced aerospace technologies into the design to help achieve its performance goals.”

The Chaparral 2X VGT’s concept propulsion system is inspired by technology derived from advanced work targeted at space travel and future aircraft design. It features a mid-mounted laser beamed-energy propulsion system, which pulses beams of light that focus in a shroud, creating shock waves that generate tremendous thrust in the lightweight race car.

With a 671-kW laser, powered by a pack of lithium-ion batteries, and an air-powered generator to provide 900 horsepower worth of thrust, the Chaparral 2X VGT will be capable of a 240-mph top speed in the video game with 0-60 acceleration capability of 1.5 seconds.

The propulsion system’s position in the composite chassis complements an unconventional yet highly active prone driver configuration – face down with the driver’s arms and legs splayed toward the wheels. In fact, the race car’s propulsion and suspension systems are built around the driver, enabling progressive strategies of active and driver-adjustable aerodynamics.

“Think of it as adapting a wing suit to a racing car, where the driver’s movements control certain aspects of the aero package,” said Saucedo. “In many ways, the Chaparral 2X VGT is like racing wing suit, with a protective fuselage for ‘flying’ very low to the ground.”

The driver-enabled aerodynamics eliminate the need for large, conventional wings and other aero devices used to generate grip-enhancing downforce – an attribute that helps reduce the overall mass of the Chaparral 2X VGT’s minimalist structure. Only essential elements are on board, with instrumentation, for example, projected on the driver’s helmet visor.

“The Chaparral 2X VGT is a vision of how advanced technology may shape the look and driving experience of racing,” said Saucedo. “Chaparral’s race cars and methods were seen as outlandish four decades ago, and with the innovative spirit still burning at Chevrolet, the Chaparral 2X Vision Gran Turismo concept might just be a harbinger of motorsports in the next four decades.”

Other manufacturers have developed concept race cars for the Vision Gran Turismo project, but Chevrolet is one of the few to transfer it from the digital world to a physical concept vehicle.

The Chevrolet Chaparral 2X VGT concept is on display at the Los Angeles Auto Show through November 30.

Editors: Additional photography will available here once the vehicle is unveiled at the Chevrolet press conference during the Los Angeles International Auto Show, Nov. 19, 2014 at 7 p.m. EST.

Founded in 1911 in Detroit, Chevrolet is now one of the world’s largest car brands, doing business in more than 140 countries and selling more than 4.9 million cars and trucks a year. Chevrolet provides customers with fuel-efficient vehicles that feature spirited performance, expressive design, and high quality. More information on Chevrolet models can be found at www.chevrolet.com.