It was in 2007 that the current Toyota Tundra was introduced, having an update in 2014. In that time, it has maintained a smaller but loyal fan base that tends to complain, about all things, for example, odometers that are not high enough. Now the next-gen 2022 Toyota Tundra is finally here. Toyota even bought a million-mile Tundra from a customer while designing the new one to figure out how to deliver more of what its biggest fans want: that is, a pickup with good options that’s also hard to kill. 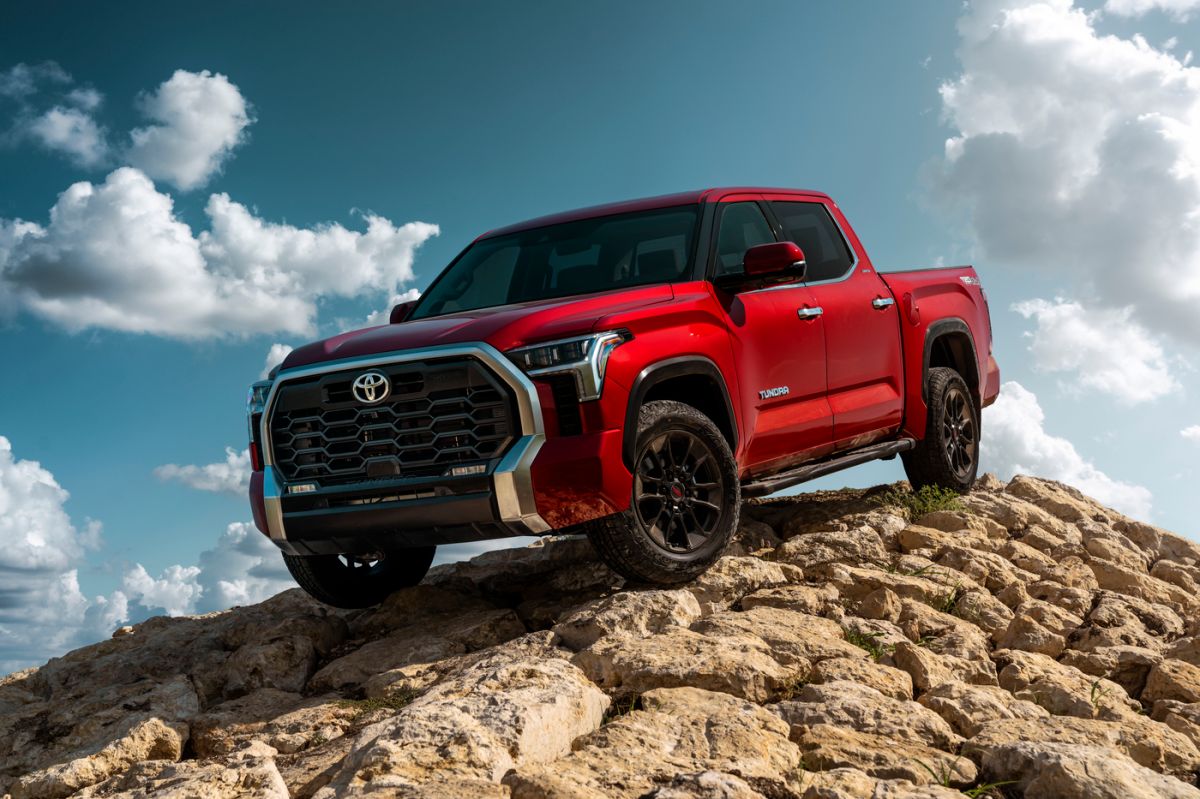 As a result, there is a lot of proven technology and ideas in the new Tundra .

No more V8, but more power

All new Tundras come with Toyota’s new 3.5-liter twin-turbo i-Force V6 engine , good for 389 horsepower and 479 pound-feet of torque . That’s not only more power (8 hp) and significantly more torque (78 lb-ft) than the outgoing V8, but Toyota claims it’s more efficient, too. We’ll have to wait for the new EPA figures, but since the V8’s lackluster fuel economy was one of the current Tundra’s biggest downsides, there’s plenty of room for improvement there.

The new engine is a 24-valve, dual-overhead cam, chain-driven V6 with Dual VVTi systems and an aluminum block. It also uses an intercooler that keeps turbo temperatures low . Cooling was a major focus of the engine design, with a two-layer water jacket design and additional machined cross channels that are intended to maximize coolant flow and therefore improve reliability. 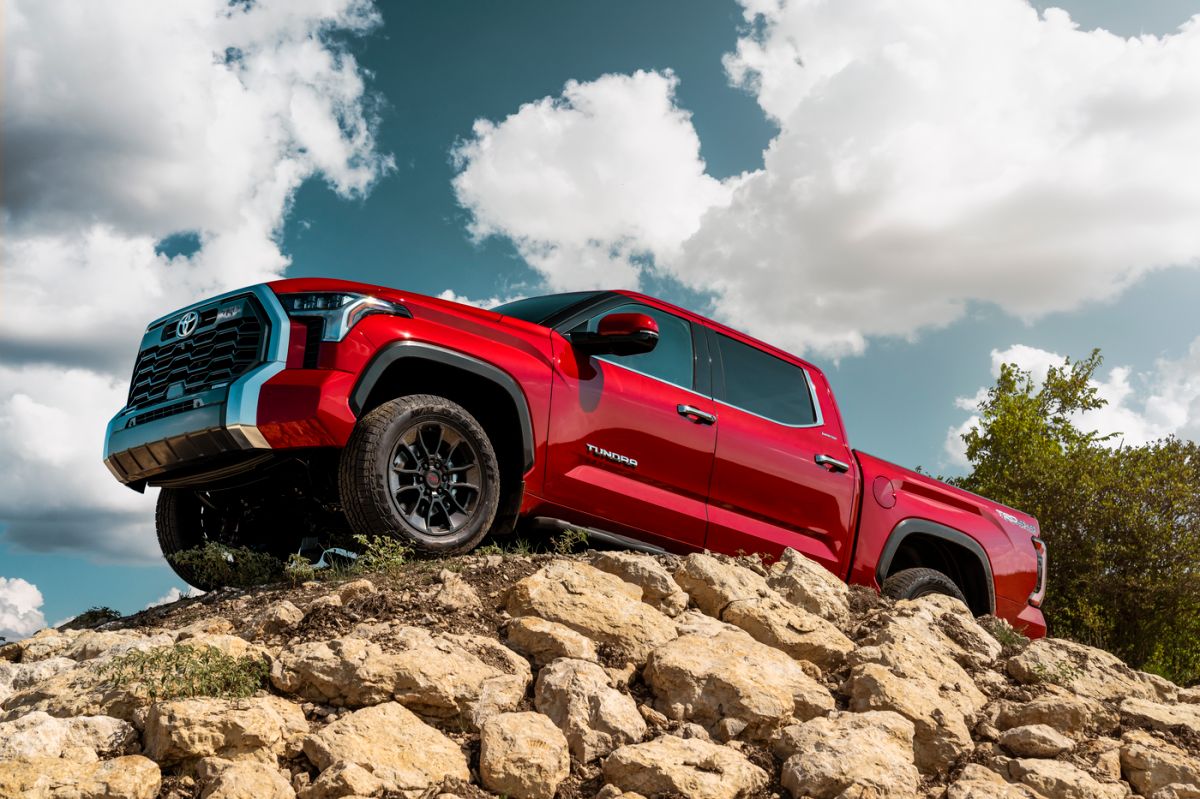 The most efficient transmission is also the most powerful.  The hybrid i-Force Max version of the Tundra powertrain maintains the same V6 but adds an engine-generator with a clutch in the hood housing in line between the engine and transmission. This additional engine powers the entire system up to 437 hp at 5,200 rpm and 583 pound-feet of torque reaching just 2,400 rpm, the latter of which is especially good for trailers and off-road use.

The Tundra is even capable of driving only as an electric vehicle, although the gasoline engine kicks in automatically at speeds above 18 mph . Starting, driving for electric vehicles only, energy regeneration and electric assistance are carried out through the parallel hybrid system.

That tried and true 288-volt sealed NiMH battery for the hybrid system sits neatly under the rear seat. A full-size truck doesn’t need the added packaging benefits of switching to a more compact lithium-ion battery. They also touted it as a sustainable option given that there is already an established recycling process for their NiMH hybrid batteries once they reach the end of their useful life, something that remains a costly challenge when it comes to Li-Ion hybrid batteries.

Non-hybrid Tundras have an enclosed storage area under the rear seats.

It’s not a flatbed truck, and Toyota’s aluminum-reinforced composite body design was successful enough on the Tacoma to bring it closer to its big brother. It’s lighter and less prone to corrosion than the steel bed the Tundra used to have, and more durable than an aluminum-only bed. Oh, and if you need something in bed when you’re in the cab, the entire  rear window slides down to make it easier to reach. If you prefer to use the tailgate, there is an impact switch on the side of the driver’s side taillight that you can push with your elbow to release the tailgate.

Underneath that bed and body are plenty of other enhancements that should help smooth out whatever it is you’re trying to send out. The Tundra comes standard with dual-tube shocks with triple oil seals and extended dust covers , steel-reinforced ball joints, and new forged aluminum knuckles that are stronger and lighter than the current generation.

Fortunately, Toyota’s new interior maintains a ton of buttons for the most commonly used functions inside, including a volume knob for the stereo and all the HVAC controls you could want. It includes a standard 8-inch or larger 14-inch touchscreen front and center , with a completely new user interface that is more reminiscent of a tablet. The 14-inch screen comes with pinch and zoom functions and a higher resolution.

Apple CarPlay and Android Auto are standard on the new infotainment system , as are wireless updates to keep it up to date and running smoothly. The system also comes with a Smart Assistant with which you can use voice controls for navigation, audio and more, including phrases like “Hello Toyota” to wake you up. The Tundra also offers Wi-Fi Connect, which turns the truck into a 4G hotspot for up to 10 devices .

The new Tundra also comes with several new camera angles, available in a full 360-degree view , to make towing and parking easier, plus there’s even a rearview mirror camera available . The available 14-inch touchscreen unlocks a few more views, namely the multi-terrain monitor and the wide-view monitor, the latter of which is a full top-down view of the truck, ideal for aligning trailers or monitoring cargo. The multi-terrain monitor comes in the TRD Pro model and the TRD Off-Road package, which adds a button to display the truck’s front, side, and rear views on the screen to more easily navigate obstacles.

Towing was a big focus on the upgraded Tundra, with the truck featuring new power folding and extendable tow mirrors that are taller, heated, and incorporate additional curvature that extends the driver’s rear field of vision . These new mirrors also have rear- facing LED trailer lights that can help you see what you’re trying to haul in low-light situations. The new Tundra also features an integrated trailer brake controller , Trailer Back Guidance to help you back a trailer, and Straight Path Assist to back your trailer in a straight line if necessary. itsBlind Spot Monitor , which is part of the standard Toyota Safety Sense 2.5 driver assistance suite found on all new Toyota, is also calibrated to keep an eye on additional blind spots around whatever you’re towing.

A panoramic roof, heated and ventilated front seats, heated steering wheel and rear sunshade are among the options you can specify . One of the more attractive options is the 12.3-inch thin-film transistor display that replaces the traditional gauge cluster with a customizable digital one.

The new Tundra will be available in two four-door versions: a crew cab and the longer CrewMax . Double Cab buyers can get a 6.5 or 8.1 foot bed, while the CrewMax gets a 5.5 or 6.5 foot bed. You can get it in two- and four-wheel-drive, with a range of familiar-sounding trim levels , in order from the most basic to the extra-luxurious: SR , SR5 , Limited , Platinum and 1794 Edition . The TRD Pro is the high-end version and is only offered with the i-Force Max hybrid powertrain.

Pricing has yet to be announced, but we’ll find out soon as the 2022 Tundra goes on sale later this year.