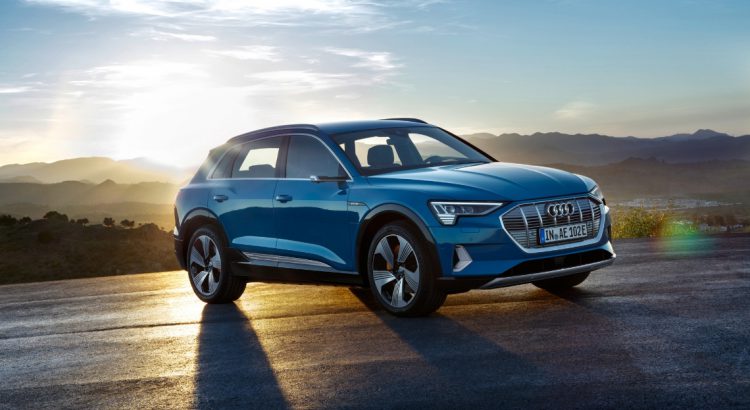 Audi e-tron – With its 100% electric SUV, Audi meets Jaguar I-Pace, as well as Mercedes EQC. Here it is presented at the Mondial de l\’Auto 2018.

Audi e-tron – Imagine a refined Q5, slightly modernized and resuming some features of the new Q8 . And, above all, totally electrified. That\’s it ? Here is the e-tron, an elegant SUV just unveiled . Easy to recognize thanks to its light strip crossing the tailgate, or off the hook that characterizes its projectors, the newcomer should appeal to fans of the brand.

Expected in Audi dealerships from the beginning of the year 2020 , this model is already available to order, against 79 000 € in Germany. It responds to the Jaguar I-Pace , the first 100% electric SUV capable of replicating to Tesla. Future competitor of the Mercedes EQC , it also opens the way to a whole range of electric Audi.

The imposing machine extends over 4.90 meters long. It has a trunk of 600 liters in the back, and a smaller front storage of 60 liters, which is intended primarily for electric cables used for charging.

The e-tron hides in its bowels two asynchronous electric motors, whose cumulative power reaches about 360 hp. Each of them is responsible for animating an axle. What to shoot down the 0 to 100 km / h in just over six seconds according to Audi, and reach 200 km / h peak (electronic flange). Its autonomy is announced 400 kilometers according to the WLTP cycle. We can hope to travel 350 kilometers without stopping at the wheel.

The Ingolstadt manufacturer claims that 95 kWh Lithium-Ion batteries are recharged at 80% in half an hour on so-called fast terminals. But it will take 8:30 on a terminal 11 kW for a total recharge.

The new SUV e-tron will be manufactured in Belgium, in Brussels.