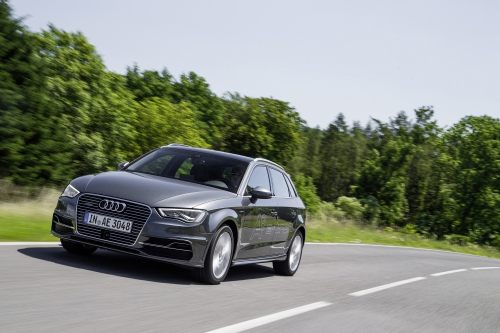 First compact plug-in hybrid, the Audi A3 Sportback e-tron broadens the spectrum of the supply of this technology otherwise called plug-in which manufacturers now seem to be engulfed. True to its reputation, the German manufacturer supplies here impeccable vehicle able to travel 50 km in electric mode before the engine takes over. And since this is necessarily a German, furthermore a premium brand, it is inevitably expensive. Really?

The last Paris Motor Show was crowned the hybrid at the expense of pure power. Yet it has not said its last word. Because combining the two modes, then the plug-in hybrid has the advantages (reduced CO2 emissions and low cost per kilometer) of the first without its drawbacks (still limited autonomy and long cooldown).

This new breed of clean cars were still on the fingers of one hand there are some months:Chevrolet Volt / Opel Ampera, Volvo V60 Plug-in Hybrid , Mitsubishi Outlander PHEV and Toyota Prius Plug-in. Today, if supply has grown, it is mainly thanks to German manufacturers: BMW i8, Porsche Panamera S Hybrid and Cayenne S and Volkswagen Golf GTE. The Audi A3 Sportback e-tron also uses the same data sheet that the latter, namely an engine 1.4 TFSi 150 hp and an electric motor with a combined capacity of 204 hp.

50 km from its electrical autonomy are amply sufficient for daily commuting to and you can use it without fear of falling out of power for longer trips like going on a weekend or holiday to other end of Europe. The loop I have done was to take us to Paris in Maisons-Laffitte, Yvelines and departure board computer gave me a 39-km range which proved consistent with this prediction .Except the last kilometers where the engine took over, the course was conducted only in 100% electric, including fast lane in which it operates up to 130 km / h. On the way back, at the option of regenerative braking, automatic mode alternated both for final consumption of 7 liters of SP95.

At no time, the additional 200 kg compared to its diesel counterpart will hit me. Yet its 1540 kg on the balance closer to the weight of a big road sedan like the Ford Mondeo SW . However, it admirably manages to forget this overweight. It is for example able to perform the 0 to 100 km in 7.6 seconds and reach 222 km / h. Suffice to say that it is even possible to have a little fun on the small roads.

Registration A3 e-tron in stylized letters made ​​me look like a sandwich man. Also a way for the German manufacturer to indicate that it is the plug-in hybrid. Almost nothing distinguishes indeed its thermal counterpart if not invisible exhaust outlet and grille that hides the socket to recharge the lithium-ion battery 3:45 on a standard outlet, or 2:15 with the station Wall provided.

This mimicry is found in the space where, apart from the specific instrumentation and a safe with a capacity of 100 liters loses because of the batteries, everything is also similar. Should we again remind how the finish is flawless? I am in a high-end vehicle.

For this is one of the big differences with the Toyota Prius Plug-in yet barely cheaper than Teutonic. The rates of the latter start at € 38,900 for the Ambiente finish and rising to € 43,500 for the Ambition Luxe representing, according to the manufacturer, the majority of sales. The latter adds leather sport seats, reversing camera, Full LED headlights and wheels 18 ” against an entrance ticket € 37,300 for the Japanese in Dynamic finish and € 43,400 for the Lounge. What also place thanks to the bonus € 4000 almost at the A3 Sportback 2.0 TDI 184 hp equipped her with a mechanical box 6 reports (€ 37,930 Ambition Luxe finish). But unlike this heat release, the PHEV has another advantage that can benefit businesses: with emissions of 35 g, is exempt from TVS.

Toyota, however, can boast of being the first manufacturer to democratize the hybrid to the point that now closely associated with this engine. The Japanese therefore appears more legitimate about the plug-in hybrid. Perhaps, but the brand with the rings on hybridization board for 25 years. In 1989, she introduced the concept at the Frankfurt Duo. And finally, if Toyota Prius runs his millions, Audi, with its R18 e-tron quattro, terrace since 2012 the TS030 TS040 hybrid and the Japanese in the largest endurance event: the 24 Hours of Le Mans.

Above all, the Toyota Prius Plug-in is not an aesthetic canon, its interior is inversely proportional to the technology that embeds and behavior is as boring a department meeting on Friday at 18pm.The choice between the two seems bent because the power of attractiveness and the image of the brand with the rings are largely superior to those of the manufacturer of the Land of the Rising Sun. This is probably the first time we can say that Audi is not as expensive as that.

– the road and performances preserved