Seat Leon Cupra The ST 280, record holder of breaks on the Nordschleife.

“Ah … Oh.” Seat has, like other brands of the VW Group, adopted a style with taut lines and as at Skoda, the premium effect on the overall elegance of the car is undeniable, as to make shade for VW and Audi. The Seat Leon ST retains some of its genes including ribs V adorning the sides, but has matured with sharper optical overall appearance and less polarizing. Nothing is more subjective than aesthetic considerations, but the style of this Leon ST, already attractive in the humblest Version FR TDI tried in 2014, is most seillants in this livery White Nevada, with 19-inch wheels to fill the passages wheels. On a wheelbase of 2631 mm the same as the 5-door hatchback Leon, Seat has extended the cantilever rear of 27 centimeters to carry the length 4.54m, thus providing a safe 587 liters (1,470 liters with rear seats folded).

The Leon Cupra is available in two engines, both derived from the 2.0L turbo EA888 to direct injection common to all sports in transverse engine of the VW group. They develop 350 Nm at 1700 r / min, and the power rises to 265 hp at 5350 rev / min for the first and 280 hp at 5600 rev / min for the second. Our test version focuses on 280 dual-clutch DSG gearbox horsepower 6-speed. For the good mouth, Seat won with the manual version of the Leon Cupra ST 280 the record for the fastest station wagon on the Nordschleife with a nice 7’58 “12 on the tower 20.6km.

At this stage not to advance further without playing the game of the seven differences with his cousins ​​at Skoda, VW and Audi. The wheelbase of the Leon Cupra ST is identical to the Golf Variant R and S3 Sportback. Seat makes 20 horsepower and 30 Nm at VW and Audi, and is satisfied with a two-wheel drive transmission. The template is very similar to that of the Golf Variant R, and 22cm longer than the pseudo break S3 Sportback. On paper, the Seat Leon Cupra ST is 108kg lighter than the Golf (54kg compared to S3), but we weighed our T Cupra to 1468kg with a full tank, but it is equipped with option heavy like a glass roof for example. Still, the weight / power ratio of the Cupra is identical to the ST R Golf Variant, the weight ratio of the transmission 4 Motion disability is offset by the further specification of the 2.0L TSI. The Skoda Octavia RS230 rolls on a wheelbase 50mm favoring livability. The maximum torque is identical to the Seat, but the slightest max power of 50 horses.

So there is a choice between perfs and up (against Skoda Seat) for a very similar price, or pay significantly more for the full transmission of Golf, or put an additional extension for the stylish compact S3 Sportback. On paper, the Leon Cupra ST therefore offers an excellent compromise between habitability and performance at a very competitive price, the only concession being to be without all-wheel drive: there’s nothing with nothing. 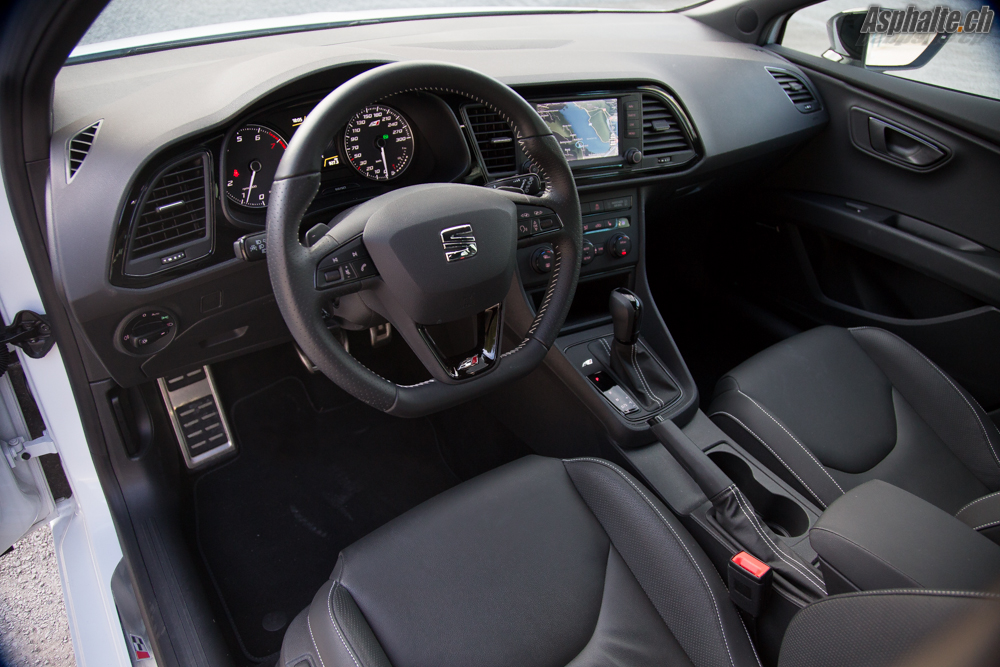 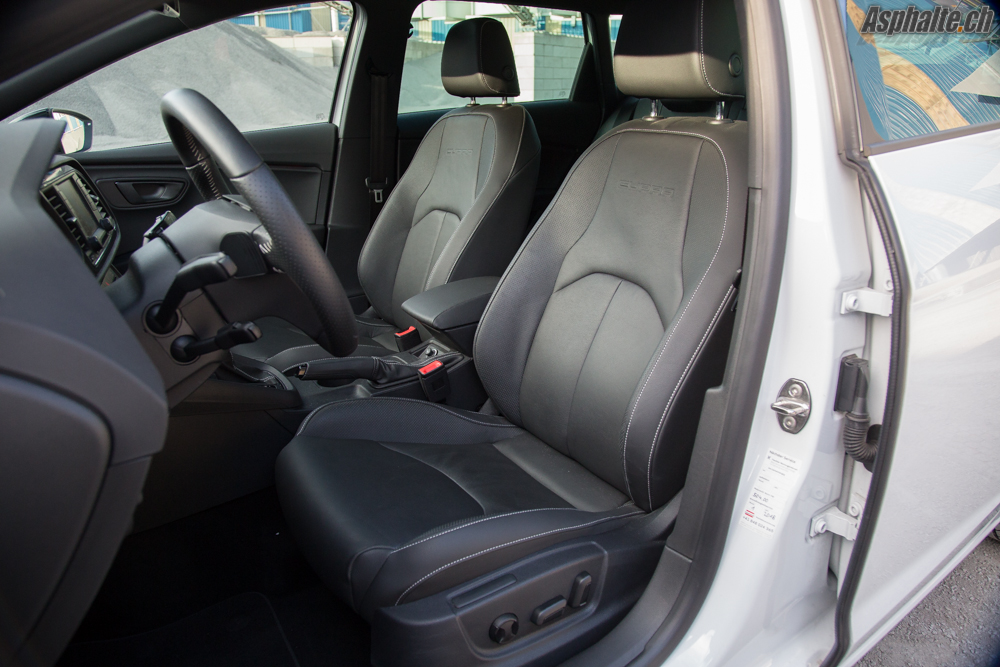 The “ah” appreciative to the outside, we go to the “oh” less enthusiastic inside. Despite the leather upholstery (option for 1830 CHF with the electrically adjustable driver’s seat) and white contrast stitching, expenditures were carefully counted. Plastics are foamed at the end, the key is there, but there is no premium touches that can be found on a Golf R, let alone Audi. While commendable efforts have been on the graphics with the draft carbon fiber pattern on the central LCD, but for the rest, hardly enough to party. Again, there is nothing with nothing. As our Cupra 280 ST CHF 45’750 DSG6 tip, with navigation, adaptive cruise control and parking assistance front and rear. Standard equipment is very complete with a multifunction steering wheel, LED headlights, air conditioning, floor mats, tinted windows from the B-pillar, DAB + and the center armrest. Point of pettiness but a diffuse and persistent feeling of frugality in manufacturing. Luxury lovers should go elsewhere, here the sub was invested in the essential, not superfluous. 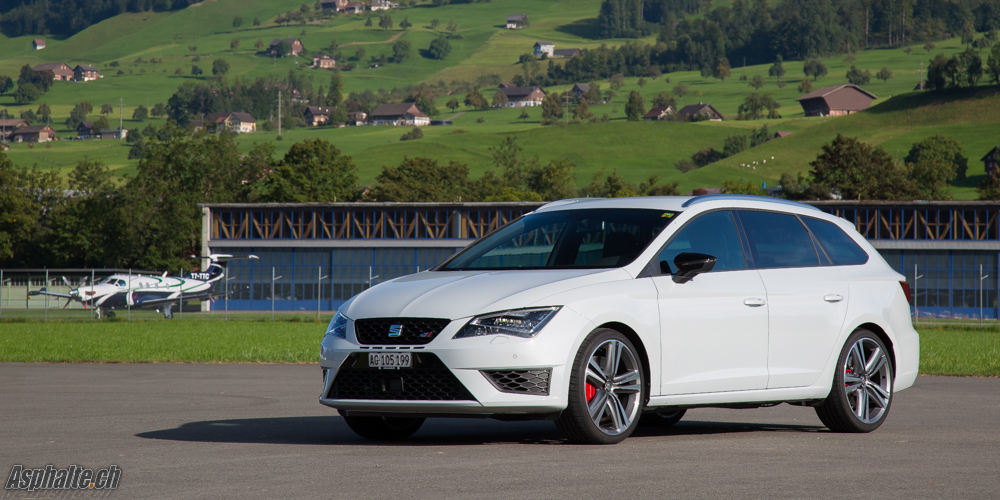 Turning the ignition key, I expected to be greeted by a sound assertive presence. The atmosphere is the opposite, discreet and ordinary. The various proposed configuration modes should help address this, but stereotypes, as too often top. The selection of fashion Cupra actually gives more voice to the engine, but with some caveats. First, it switches the DSG in the unbearable Sport mode, which requires driving in manual mode to avoid unnecessary ridiculously over-revving. Then that voice is somewhat singular. The increased volume comes exclusively from the front, with an unusual modulation for a 4 cylinders in line. The explanation is simple: Seat installed at the base of the windshield, near the axis wipers speaker, called SoundAktor. The system is different from that adopted by the Porsche Carrera 911 (an ear canal bringing the inlet harmonics in the passenger compartment) or BMW for some of its sports (overloading the engine noise by the audio system). The soundaktor is an auxiliary speaker that generates a synthetic sound. My main complaint is not the nature of his performance or even its existence, but the fact of not being able to activate independently of the engine-gearbox management. 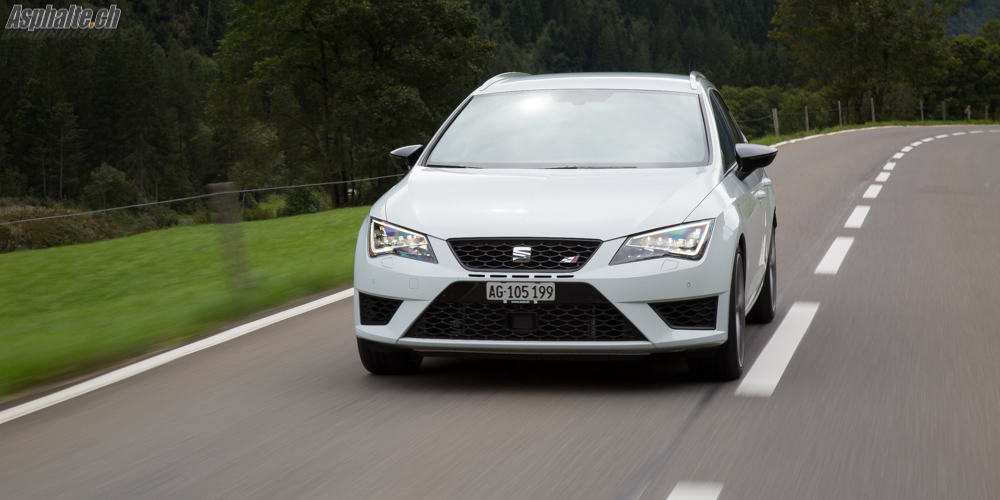 The DSG6 box installed on the Leon Cupra achieves ST flawless. The differences between the units used in the Volkswagen group are notable, and this body is really impeccable. Fast and agile in traffic, it will never be faulted on this test. This version of the 280 horsepower EA888 is also an undeniable success. A mill of a resplendent health, torquey at low speed to perfection, and downright angry to more than 6000 t / min. The performance is more than respectable, they are respectable: the year of the recovery of 100 to 150 km / h in kickdown is easily performed under 7 seconds. The couple of watts, content weight and a pleasing grinta, almost insolent. The impression that emerges is similar to the verve of the Golf 7 GTI (which is identical maximum torque), with a more willful personality and angry that the versions “big turbo” of the Golf R, Audi S3 andAudi TTS. 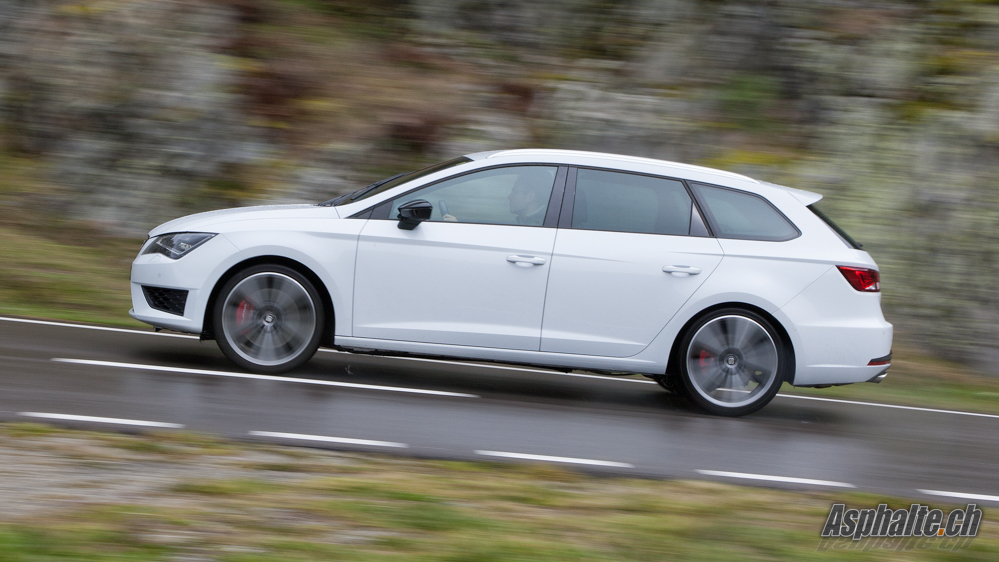 Route 350 Nm on only the front wheels could be a perilous exercise, but again, the Leon Cupra surprised ST. First observation: the lack of torque references in the direction, which remains unflappable, even on the first reports. Second observation, the couple goes to the ground, in the dry at least. The limited slip differential prevents slippage of the inside wheel bearing very efficiently. The behavior is naturally understeer at the limit, we must have the patience to put forward, but once registered, the Leon ST behaves commendably. Management is in unison with contemporary automobile production – amorphous – which does not necessarily help to flirt with the limits of the front support and tu in the confines of the ellipse of adherence. Blocking the front differential is adjustable between two modes (Normal and Cupra), but I would have great difficulty describing the difference between these two configurations. The DCC adjustable damping is also part of the parameters influenced by the driving mode or independently configurable in Individual mode. The box is equally at home in sporty driving than it is when “shortshifte” in commuter traffic. Led on the Alpine passes of central Switzerland as a following car, the Leon Cupra ST has the consensus around it: a solid, rigorous and efficient. 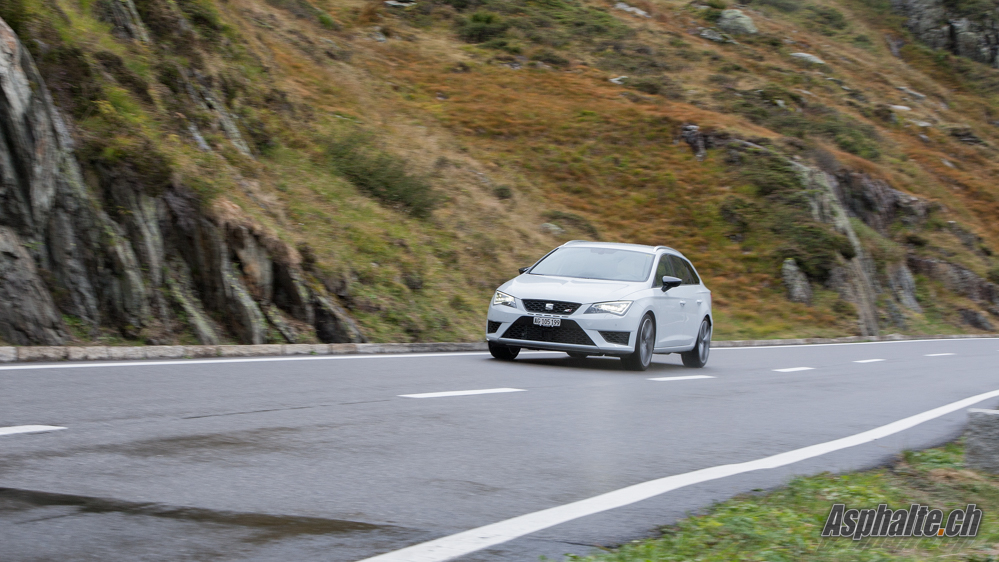 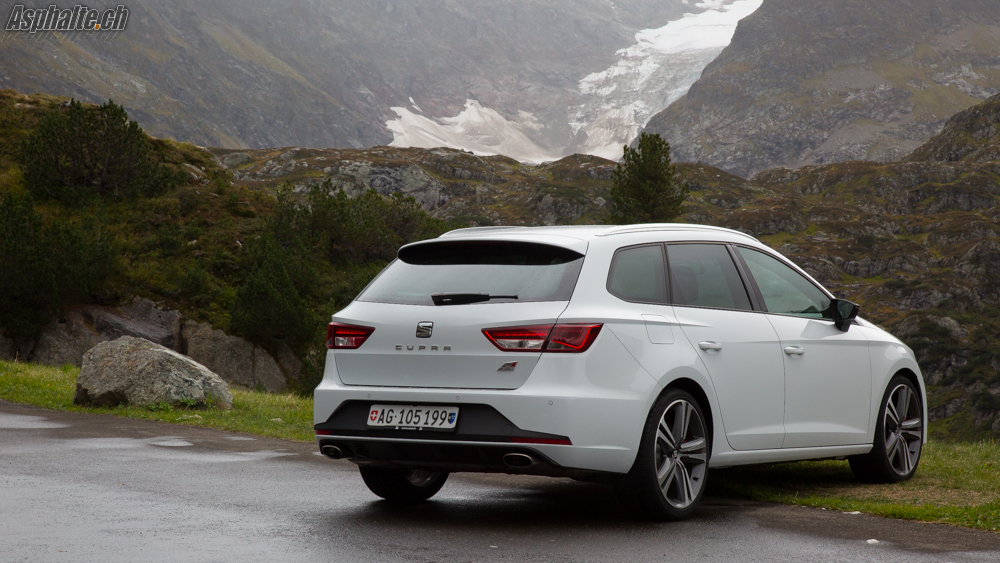 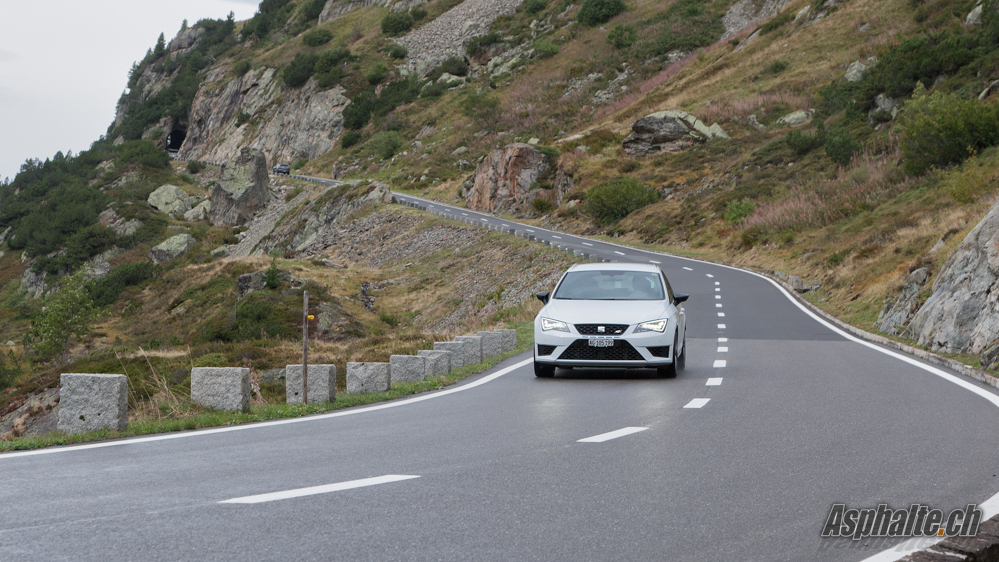 We identified a consumption 8.1 L / 100km of unleaded 98 throughout the test (8.0 indicated by the onboard computer to an average of 72 km / h), which is less than 8.3 L / 100km recorded in winter on a Golf GTI 7 yet lighter than 55 kg and 50 horses going to Leon. Enjoying an excellent habitability, comfortable on long journeys thanks to long higher gears, the Leon Cupra ST offers an attractive cocktail and very effective to sports car enthusiast who seeks practical aspects or simply the natural elegance of ‘a break. A product without real fault and the formidable price performance ratio. In early 2016, 290 Cupra version will replace the concession Cupra 280. The maximum torque of 350 Nm remains unchanged, but the beach is extended up to 6400 rev / min to hang 290 horsepower between 5,900 & 6,400 t / min . A development that can only enhance the attractiveness of the Leon Cupra ST.