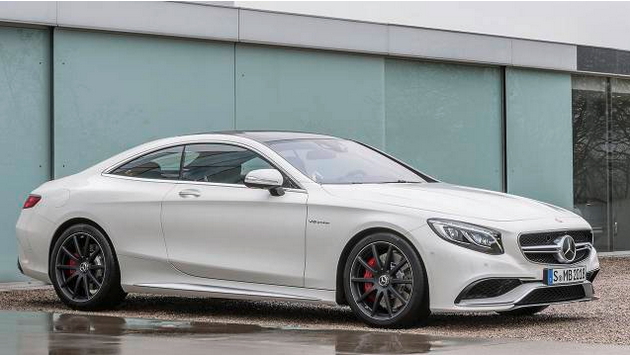 LikeAutomotive ~  Review 2015 Mercedes-Benz S63 4MATIC Coupe | Price (on bottom) | Spec – This is not a new CL, says Mercedes: It’s an S-Class coupe. A small change, but a big difference. The rebranding reinforces the relationship with the world’s best-selling luxury sedan, as Merc’s big hardtop makes an all-out assault on proper top-tier luxury coupes from Aston Martin, Bentley, and Ferrari.

And they had better watch out. This thing looks so good, it could sound and drive like a smoky old 190D and we’d still want one. If the CL always seemed a bit too much like your Grandpa’s dream car, you’ll be begging for him to leave this one to you in his will and then helping him take up wingsuit flying to hurry the keys in your direction. Choose the right color—light tones pick out the lines so much better—and you’d swear there’s not a better-looking car in the entire Benz portfolio.

The base coupe for US buyers is the $120,000-ish S550 4MATIC. Powered by a 449-hp twin-turbo 4.7-liter V8, it makes full use of the standard all-wheel-drive system to storm off the line without a hint of slip and hit 62 mph in an AMG-like 4.6 seconds. The optional AMG Line trim makes it look like Affalterbach’s work, too, but you’ll need to double your dough to get your hands on the real deal, the S63 AMG. Again fitted with all-wheel drive and a seven-speed automatic transmission, but this time packing a 5.5-liter twin-blown V8, the S63 makes 577 hp and 62 in 3.9.

In both cases, that’s going some for a car that, while 3.5 inches shorter between axles than an S-Class sedan, is almost 200 inches long and nearly 4600 lbs. The S550 hides those figures well in the curves, with massive grip and excellent body control, although you’d never mistake it for a sports car. It’s hugely competent but not overly exciting, feeling rather remote as you might expect and as owners probably want.

The S63 is a different matter. Close to 150 lbs lighter than its predecessor, it instantly feels more agile, more responsive, more tightly-damped than the S550. It steers that bit sharper, stops quicker, and the pedal feel from the optional ceramics is great. It never exactly shrinks around you, but the S63 has the moves to chase buzzy sports cars down back roads and win. Not that carving curves is what these kinds of cars are about. They’re about swallowing freeways, flitting through states two, three at a time, looking hot, but never breaking a sweat.

Even without the Magic Body control option US customers won’t be offered, the ride comfort is absurdly good. The cabin is eerily silent at speed, the quietest of any Mercedes car ever, claimed the chief engineer. The dashboard and much of the detailing, from the cinematic virtual instruments to the Bentley-esque air vents, is lifted from the S-Class sedan, but the difference is in details like the steering wheel, which grows a third spoke. You also get Benz’s new combined touchpad/rotary controller, and there’s a head-up display option. This is a fantastic place to while away hours, a match for anything from Bentley or Rolls Royce, provided you’re up front. The rear seats aren’t exactly cramped; this is a proper four-place coupe, but it’s no Pullman.

When Mercedes projected the name of every one of the S’s safety systems onto a screen at the end of the technical presentation, the list was so long that it looked like a run of movie credits. They include the now seriously capable Distronic Plus cruise control that will stop, start, and steer the car in traffic; night vision; and active headlights, whose chintz factor can be astronomically upped by adding some optional Swarovski crystals to the lamps.

Sadly, for tech heads, the S’s newest and most interesting gadget, the Curve Tilting function, isn’t coming to the US. An extension of the active body control technology Benz has offered for the last 15 years, this gizmo turns every bend into Daytona banking, just like the weirdo Mercedes F300 Life Jet concept from 1997. A fugly trike that looked like something MacGyver might have cobbled together to escape from a junkyard prison after being fed LSD intravenously for months on end, that mutant’s party piece was the body’s ability to lean into curves like a motorcycle while the wheels remained upright.

The S coupe doesn’t go quite so crazy, but using info gathered from a camera and steering wheel and lateral acceleration sensors to read the road, it responds by activating the hydraulic rams in each suspension strut to deliver a maximum of 2.7 degrees of lean into the corner.

That doesn’t sound like much, but it feels like plenty when you make that first steering input. Mercedes see this tech as a comfort rather than a performance feature; you’re better off with the tighter control and more natural sensations provided by non-leaning Sport mode if you want to really rip through some country roads. But once you get into a rhythm, it begins to feel surprisingly normal, if further isolating you from what the car is actually doing. The system only works when the road has painted lines to read, though. Don’t expect to wiggle the wheel driving down Main Street and get the thing jigging like a ’64 Impala low rider, or for it to set any gymkhana records.

Packaging issues mean Curve Tilting is only available on rear-drive cars, and as Mercedes USA has decided only to bring 4MATIC versions across the Atlantic, we’re going to miss out. No matter, as it’s merely an interesting aside and definitely not a deal-breaker. The fundamentals of this car—style, luxury, refinement, and performance—are strong enough that it doesn’t need gadgets to win you over.

One of the most elegant big GTs on the planet, the S-Class coupe is about the most capable method of getting from A to B without having to stop for Zs. Half the price of a Ferrari FF, more handsome than a Continental GT, and more refined than either, the S-Class coupe firmly puts Mercedes in the big league.