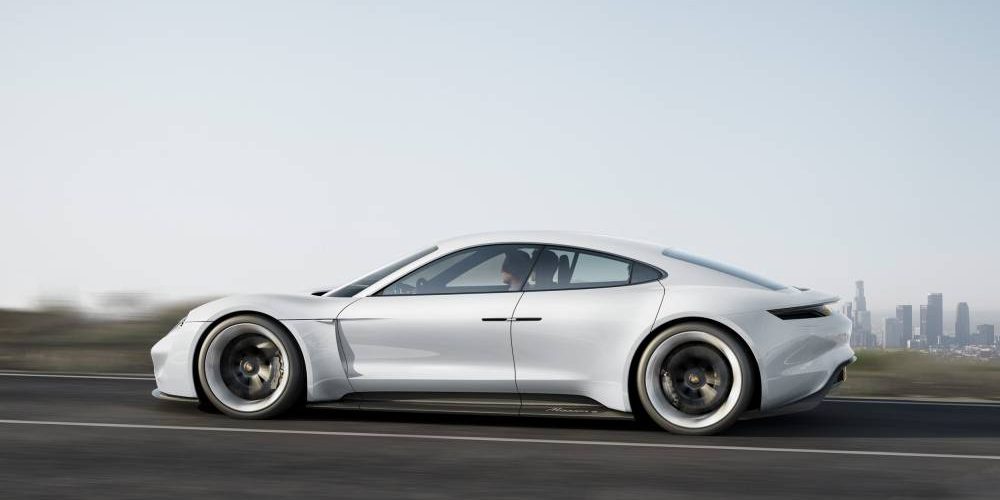 At the private party reserved for the privileged few – actually several hundred guests handpicked – Porsche hit a great shot. On the eve of the revelation at the show booth appeared in a large mechanical silence before a stunned audience the latest concept car from Porsche. Mission assigned to this occurrence: give a good idea of what will be the future Panamera sedan upscale brand. But also trace the route of a super sports car manufacturer for an electric high performance. By dint of being cut cruppers by Tesla on this projection into the future, Porsche took the bit in his teeth and developed a striking car whose characteristics are no less so.

This four-door four-seater luxury is indeed provided the first 800 V engine that develops a power of 600 hp (440 kW) and propels the four-wheel drive (and directors) from 0 to 100 km / h in 3.5 s. But the best is yet to come. This car capable of a range of 500 km will charge the battery to 80% in 15 minutes! Inspired by the Porsche experience in endurance racing, winning particular the 24 Hours of Le Mans, the Mission E borrows its synchronous permanent magnet motors for hybrid 919. While cars are engines of current at 400 V, those of the Mission E double the dose but require a dedicated outlet or charging by induction. It may nevertheless be recharged from a 400V socket, but more slowly.

Less than 8 minutes at the Nurburgring

Its lightweight chassis design integrates into the floor between the running gear and the two engines of the latest generation lithium-ion batteries. The body itself is involved in the performance by using aluminum and reinforced plastic of carbon fibers. Thus, the Mission is able to establish E anthology performance, but, unlike other models, repeating several times as 0-200 km / h in 12 seconds. Moreover, Porsche is already credited with a time less than 8 minutes on the North Loop of the Nürburgring.

In real challenge to Tesla, the Mission takes advantage of E 800 V to shorten the charging time, minimize weight and reduce the copper cables section. The charging socket is located in a door behind the front wheel. But this remains a Porsche electric full with a low center of gravity and distribution of great masses.Aerodynamics is particularly careful study and design closely prefigures what will be the next Panamera. We know that the big Porsche sedan had needed a clever restyling to ask a real personality and acceptance, but this time, it is not clear who will find fault there. Except antagonists opening doors and rear extractor outrageous, it is likely that there is 80% of the future Panamera.

Taking advantage of the absence of transmission and thus released to the interior space, Porch designed a board edge airy design close to current creations.However, the instruments are using virtual light emitting diodes. Their orientation is able to follow the driver’s seat position as (a bucket as for passengers) to always have a parallax and 3D playback perfect. We remain more cautious on gesture recognition, which no longer requires pressing a button to select a function. For if it is necessary to learn a sign language to make himself understood to his car, where we reach the limits of progress.