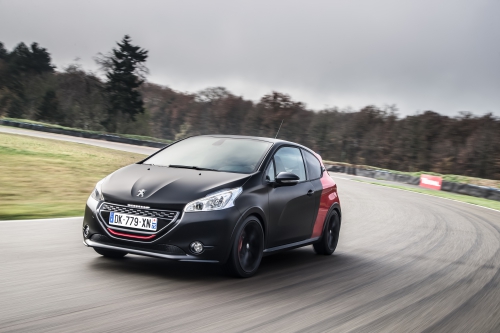 For thirty years the 205 GTi, Peugeot proposes an even more radical version of its top-down: the Peugeot 208 GTi 30 th. And to judge, nothing like a circuit, the West Parisien in Dreux.

Appeared in 1984, the Peugeot 205 GTi remains the symbol of those in urban vitamin engine.Three magic letters that marked a whole generation and makes the drivers of happiness grass.Today, as evidenced by the book of William Maguet dedicated to its restoration , the lioness came one level in the world of the collection. “This is definitely THE French car this period. She even allowed to dethrone Volkswagen Golf GTi. Highly reliable and practical, it perfectly combines versatility and character while still perfectly usable in everyday life today, “said Xavier Audiau, editor of the magazine AutoRétro. With nearly 300,000 copies produced, it is still common in the classifieds. But the odds of that Youngtimer (note: the vehicles of the 70 to 90), which is celebrating its thirty years irreparably flies. “It is at 6 000 to 7 000 € for a nice copy, or even € 10,000 for an exceptional model,” says Xavier Audiau.

To celebrate the anniversary of the automobile myth, Peugeot sells a limited and exclusive version of its 208 GTi. The Lion brand has orchestrated its launch with a video “The Legend Returns” which begins with the masterly pub made ​​at the time by Gérard Pirès. It was broadcast just before the opening of the Paris Motor Show where I wanted to be a topic on it. The crowd that continuously massaged before his red and black body prevented me to make a video. This two-tone paint, one of the few options available (€ 1,100), is the implementation of the clean cut concept car Exalt.

History of comparing this new Peugeot had made ​​available the 208 GTi “basic” and it is with one of them I discovered the 2.1 km from the western damp track circuit Parisien . Also a way to get back in the lead Sochaux this I had tried it and did not particularly excited me. Efficient but sterile, it lacked the soul that had all the salt and the fame of his illustrious predecessor. A conclusion shared with me Baguet Xavier, a member of the 205 GTi Club of France . But the Peugeot 208 GTi 30 th offers significant improvements. Are they, however, sufficient?

If the engine 1.6 THP goes from 200 to 208 hp and adopts a Stop & Start which prevents him malus (125 g CO2 against 139 g), the increased power and this device can, however, seem meager in view of 3 800 additional € she claims (€ 28,900). Big mistake, because from the first laps on a track that dries slowly, the difference with this Sochaux last 11 hours by Peugeot Sport to undergo the transformation is obvious.

While seated in bucket seats, I support the morbidly barely fungus pit lane behind me. Reworked into a sound and a bit flattering to the ears, the lioness jumped. First difference, thanks to the torque increased from 275 to 300 Nm, acceleration and pickup are much better. Lowered by 10 mm and camped on rims 18 ” tires Michelin Pilot Super Sport pavement to the remarkable grip, the beast is played fast curves. At the hairpin, I arrive 20km / h faster than the Peugeot 208 GTi classic.Presumptuous? No. Red Brembo calipers with four pistons and ventilated discs with a diameter greater kick in without a fight. This is the second big difference: much more efficient braking. Add to that the limited slip differential cut RCZ-R to improve traction in the winding portions as third difference so that it can later hinder the entry of a turn and accelerate earlier at its output. After 4 laps, I decided to disconnect the ESP and play a bit with the butt significantly player.

Outside the track, and despite a chic nothing missing in comfort (air conditioning, GPS …), it will however deal with a firm damping. The back of the fifties, nostalgic for that blessed time when speed was not taboo, the he will bear?

To test the Peugeot 208 GTi, I said it lacked more soul and she betrayed somewhat GTi mind and that it was rather the Ford Fiesta ST which carried this legacy perfectly . But with this 30th anniversary release, this lack is filled and finally here is the mind back GTi Peugeot. It is a worthy successor to the 205 GTi. And a future collector.