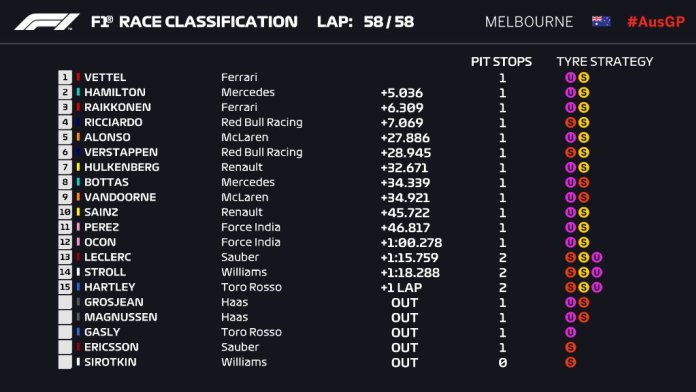 Like last year, this season Sebastian Vettel started winning the season! This was the 48th victory in German’s career, but this year he was more lucky, having passed in the lead due to the Virtual Safety Car in the middle of the race. The German had not changed elastically and did when Lewis Hamilton was delimited, so he went ahead. The Brit was placed in second place, with Kimi Raikkonen completing the podium.

Daniel Ricciardo tried to pass the Finns after the Security Car, but he did not make it and stayed fourth. Fifth Fernando Alonso, on a good start for McLaren. Max Verstappen in sixth place, in front of Nico Hulkenberg, Valtteri Bottas, Stoffel Vandoorne and Carlos Sainz completing the top 10. Let’s see what happened in the 58 rounds of the race.

The weather was very good in Melbourne, with the sun warming the track and the thermometers showing 23 ° C in the atmosphere and 38 ° C on the asphalt. The top ten drivers in the grid were Hamilton, Raikkonen, Vettel, Verstappen, Magnussen, Grosjean, Hulkenberg, Ricciardo, Sainz and Alonso, while Bottas started from 15th place.

When the red lights became past, Hamilton left well and held the top spot. Raikkonen stayed second, who tried to go on Turn 3. Verstappen pushed Vettel to third place, but German stood in front, while the Dutch lost fourth place from Magnussen. Grosjean stayed in sixth place, and Hulkenberg in the seventh. 8th Ricciardo and 9th Sainz, although he was assaulted by the 10th Alonso.

Hamilton was the fastest in the first rounds, but only a few millimeters from Raikkonen, who was the only one with a time under 1:30 in the third round. Magnussen was far slower than Verstappen, so the Dutch wanted to take advantage of the three DRS bands to get through and launch the attack on Vettel. New fastest pass from Hamilton to the 4th round, which won nearly a tenth of Raikkonen.

Bottas had just won one position and had the 13th Ocon in front of him, but his rhythm at the start was not much better than that of the Frenchman. Meanwhile, Ricciardo passed Hulkenberg and went up to 7th, behind Grosjean. Nearly 6 tenths won Hamilton in the 5th round and three more in the 6th, opening the gap in two seconds.

Verstappen lost time to Magnussen as Sirotkin became the first car to leave the race. The same thing happened to Ericsson, who entered the pits because he lost power on the steering wheel. In the front, Verstappen was asking for his batteries, saying a little later that his tires were hot enough, even though he was wearing a tougher eraser.

A new fastest pass from Hamilton in the 8th round, as Bottas was trying to pass the 13th Ocon. Raikkonen wins time in the second, so the 9th round was 63mm faster than Hamilton. Vettel’s pace was up, but he was slower than his team mate, with the difference between them being 1.7 seconds.

Bottas finally overtook Ocon and went up to 13th with Perez in front of him. Purple from Vettel in the first two chips, resulting in completing the 10th round to 1: 28.6, faster than everyone else. The mistake of Verstappen on the first turn, having temporarily lost the back, made a ts-a-ké and fell to 8th, behind Hulkenberg.

Raikkonen replied to the next round, winning four tenths from Hamilton and a half second from Vettel. Ricciardo climbed to 6th place after the mistake of Verstappen, pushing the Haas driver. New fastest pass from Hamilton in the 12th round. The British took half a second from Raikkonen, with the top three being the only ones to climb 1:29.

10th Alonso was informed of Verstappen’s mistake, responding that engineers should not lose their energy so early. Of course, his engineer told him that their energy is at high levels! Fastest round by Hamilton, 1: 28.0, opening the difference from Raikkonen in 3 seconds. Another Vettel was so far away from the Finns, while Verstappen narrowed the gap from the 7th Hulkenberg.

Gasly was the third abandon of the race, turning to pits. In front, Raikkonen was the first to descend at 1:28, even for 18mm, being significantly faster than Vettel, but Hamilton was almost as fast in the 16th round. The Mercedes pilot responded with 1: 27.7, taking almost half a second from Raikkonen.

The problems continued for Verstappen, who reported overspill in the bends. Hamilton\’s engineer told him that fuel consumption was good and demanded that he steadily enter 1:27. Pit stop from Raikkonen at the end of the 18th round. The Finnish wore the soft eraser to reach the end

Hamilton followed in the next round, leaving Vettel at the forefront. The British also put the soft eraser in 3 seconds, coming out in front of Raikkonen. Vettel increased his rhythm but stayed on the track, with Ferrari wanting to try something different.

Ultrasofts seemed to have a pace, but Hamilton won 6 titles from Vettel in the 21st round. 8 minutes slower than Raikkonen, as Verstappen entered the pits, just like Magnussen. The Dutchman changed to the soft eraser and came out in 14th place. Tire change also for Sainz. The Spaniard fell to 14th place in front of Magnussen.

Sainz stepped off the track before, while Bottas pushed forward to pass Perez ahead. He finished the race for Magnussen, just after his pit stop, talking about a problem with the suspension, with his rear left tire not having a better fit.

Several cars entered the 25th round for change, such as Hulkenberg, Perez and Grosjean, so Bottas had climbed to seventh, behind Alonso and Vandoorne. Vettel continued without change, being a bit slower than Hamilton and Raikkonen. Destruction for Haas! And Grosjean off the race as he stopped at the track.

Virtual Safety Car, with the result that those who have not entered for change now find the best opportunity. Vettel came naturally and came out in front of Hamilton. Vettel wore the soft tires, as did Ricciardo in the 4th place. The top 10 drivers in the 27th round were: Vettel, Hamilton, Raikkonen, Ricciardo, Verstappen, Alonso, Hulkenberg, Vandoorne, Bottas and Sainz.

The Car Security finally came out on the track, with Hamilton asking Mercedes what happened and Vettel passed in front of him. His engineer replied that they thought Vettel would not pass, but in the end the German was more fortunate than they believed.

We had a race again in the 32nd round. Vettel was easily ahead, with Verstappen having changed positions with Alonso before, because the Dutchman passed him on a Virtual Security Car. Vettel won a little time from Hamilton in an attempt to pull him out of the DRS. Both of them had a similar rhythm, with Ricciardo back behind to push Raikkonen.

Verstappen was also trying to make Alonso to take 5th place. Both of them had the same engine and Alonso was hearing that Red Bull might have tried something on Turn 13. Fastest pass from Hamilton in the 35th round, winning 57mm from Vettel. The British was in the DRS zone, so he opened the rear wing.

Ricciardo did the same and had the same pace as Raikkonen. Hamilton lost three tenths in the 37th round, with the British trying to find cold air. The two were by far the fastest cars on the track, turning to a low of 1:27. Fastest pass from Hamilton in the 39th round, 1: 26.8, but Vettel was a bit slower, so the British did not take much time.

Vettel picked up his pace, but Hamilton responded purple to the third track, winning a few more millimeters, rewriting the fastest lap in an attempt to get back into the DRS zone to get even closer.

The difference of the first two was just over a second, with Hamilton playing with the millimeters trying to be within seconds at the detection points. New fastest lap in the 41st round, taking a tenth this time, even opening the wing wing, as Vettel also advised.

The German replied immediately, raising his rhythm, winning a tenth in the 42nd round and 10mm in the next. Ricciardo continued to open the wing floor, but without success, since Raikkonen made no mistakes and had a stable gyro. Fastest pass from Vettel in the 45th round, with performance at 1: 26.7. Seb took a tenth from Hamilton, although the Brit scored a purple in the third.

Sainz complained of a lack of strength, as Hamilton replied in a quicker round, taking two tenths from Vettel to get back into DRS. However, Hamilton lost two seconds to the next round, making a mistake at Turn 9. This gave him room and replied with a faster pass in the 48th round, winning 7 titles from Vettel.

The Brit took another 4 titles in the 49th round and narrowed the gap to 1.6 seconds as Vettel heard that he had to give a quick round to Hartley in order not to waste time, as was the case, with Hamilton being back again after taking another 4 nearly ten in the 50th round.

Vettel stepped in, making both the 1: 26.6 in the 51st round. Their battle was not over, since in the 52nd round Hamilton approached 1.1 seconds, but Hamilton soon lost time, probably because he realized that everything was over. Verstappen won 2.5 titles from Alonso in the 54th round, with Red Bull telling him he would have extra strength for the next two rounds.

A little further behind, Bottas was trying to push Hulkenberg for 7th, but German was cool enough to stay ahead. Raikkonen continued to have Ricciardo behind, but with two rounds for the end, the Australian did not have much hope, no matter how good he was in the overtaking.

Raikkonen responded with a faster personal pass in the 57th round, so we had the final round. Eventually, nothing happened and Vettel reached the first win for this season, with Hamilton and Raikkonen standing with him on the podium.

The highlights of the race

The next Grand Prix will be held on 6-8 April in Bahrain.