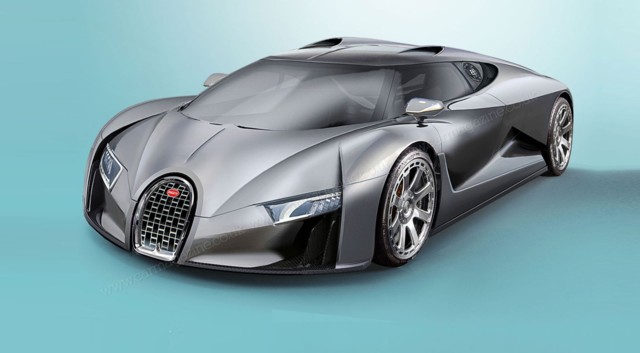 We know for many years and this has been confirmed by the voice of plant manager Christophe Piochon at the Geneva Salon in 2015, the Veyron has a top-down. Bugatti works since 2011 – and intensely in recent months based on prototypes the Veyron – one of which is nicknamed for the Chiron point named Louis Chiron (1899-1979), Bugatti driver in the years 1920/1930.

How will the new Bugatti Chiron 2016?

This hyper-sports will be of the same quality than its predecessor, a speed record monster in a luxurious envelope. Although the carbon fiber structure will be generously borrowed from the Veyron, Chiron will have 92% of new or redesigned elements reveals the British media.

Its engine will always W16 architecture, the 8.0-liter already used but obviously revamped, direct injection, coupled to 4 turbos, two classics whose pressure is increased, the other two being electric turbos, and a box dual-clutch automatic and four-wheel drive. All this should give a total power of 1,500 horses, against 1,200 horses for the Veyron Super Sport and Grand Sport Vitesse and torque of 1,500 Nm. CAR Magazine reveals in passing that Audi planchait a curious cylinder block 14 …

Question performance, we remain amazed by the incredible number of CAR, stating that the 0-100 km / h would be swallowed … 2 seconds! Half a second faster than the Veyron SS and almost as fast as a Formula 1! By cons, and it is no longer a surprise especially since the announcement that Christophe Piochon aguichait us in Geneva in March, a record is running.

The maximum speed to which Bugatti is 463 km / h beyond the 431.072 km / h achieved in 2011 and 435 km / h claimed by the new reference Hennessey Venom GT. To make printing even more, the counter of the Chiron will show up to 500 km / h while Michelin tires developed especially for the hyper-sports will be mounted.

Despite these extraordinary data pure speed, Chiron will be more docile than its predecessor, an official of the Volkswagen group told CAR that it would be “more effective on the circuit and on winding roads. “One reason is the slight weight loss,future Bugatti to over pass the bar two tonnes (1,990 kg for the Veyron Super Sport). Another improvement, visibility would be more important for weight loss passes via the amounts and customers greet the disappearance of GPS navigation … which was housed in the rearview mirror.
Then when?

She should have landed in 2015, but during the presentation of an advanced prototype last year, Volkswagen CEO Martin Winterkorn – also new number 1 after the resignation of Ferdinand Piech this weekend – was not impressed difficult access to board and asked that the door opening is improved in the manner of his laferrari.

Thus, the launch was delayed a year, and Chiron will not be available before 2016. The question is whether it will be ready for the Geneva Motor Show in March or at the Paris Motor Show in October . The price from 1 million to launch the Veyron in 2005, will be twofold for the Bugatti Chiron which exceed 2 million euros each.

No production figures are not known today, but it will undoubtedly be limited as the Veyron, produced 450 copies to the Final. Future Bugatti Chiron 2016 : 0-100 Km/h in 2 Seconds.