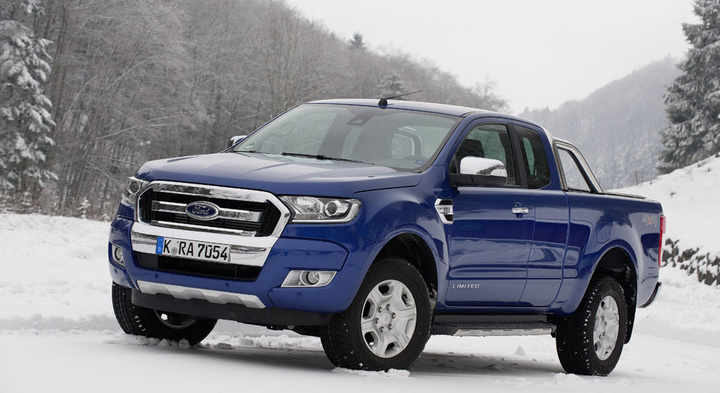 In Europe, and more in Belgium, the Ranger is the king of the pick-up with on our soil, a market share of 27.8%! It means getting the updated version spot-on is all the more vital. It’s more than just a few styling changes – though the front-end amendments are comprehensive – and there have also been significant revisions for the Ranger ute line-up under the skin.

This behemoth that attend to our roads since 2001, or best known from 2012 with its current generation. If he has undoubtedly airs US, know that it is sold everywhere in the world except the United States … precisely.In the land of Uncle Sam, these are the “F-Series” that dominate the pickup market is there, absolutely essential.

For Europe, that means …

Available with manual or automatic transmission (6 gears in both cases), it transits its power to the rear wheels. It nevertheless proposes wheel drive and, in extreme cases, a reduction that can climb trees! Or almost…

Let’s go to some useful numbers: capable of towing up to 3.5 tons (2.2 TDCi manual excepted), it accepts more than one tonne of cargo in its bucket. Of course, it may be covered with a hard top or a flap.

The least we can say is that within the little Europe, a pickup, it is impressive! If it is considered a “small player” in the United States, it remains here with his impressive 5.36 meters long and 1.8 meters high! Its revamped grille makes it more aggressive, while its interior seems more polished than ever. If available with two cabins (double or Supercab with inverted rear doors), it is the “double cab” which won 98% of the votes!

On board, there are all the traditional equipment of a sedan, beginning with a fairly complete SYNC2 multimedia system, an adaptive cruise control, a warning crossing white line and fatigue, a tire pressure sensor, speed limit signs recognition system, a rearview camera and a front collision warning.

Like dominate the road? Here, you are served! The driving position betrays the type of vehicle but the board materials, environment and equipment are very close to a traditional sedan. Disoriented? Not really so. The living area is very generous (except for the rear seats Supercab), but the first key stroke, no doubt, soundproofing seems less efficient than aboard a sedan! And empty bucket, comfort is still quite hopping.

Tried on road TDCi version 3.2 with the manual gearbox, the Ranger shown a surprising behavior!Balanced, with an almost precise direction, it is in no way a “ball” when the windshield is pointing in the perky virolos the Ardennes. Certainly, the gearshift is a little wayward, 5-cylinder sings a partition from more rocky past the 3000 rev / min, but at least it lives! And then the long wheelbase is largely prevented in time that the rear axle propulsion begins a slight evasion … In short, we have fun!

When the bitumen stops …

Off-road, it shows much more competent than the vast majority of SUV, thanks to its rear differential lock and its gearbox. Only its size can cause some problems … A small loop 2.2 TDCi confirms that it is more discreet than the “big” 3.2 TDCi, both in terms sound and in terms of recovery. If this is not a problem in itself empty, we assume that once loaded, the 470 Nm of the 3.2 TDCi are welcome …

The basic version (2.2 TDCi manual, XL finish, Super Cab) is almost never ordered. It is used to display at least a 24,195 call price of €, VAT excluded. The premium, which largely dominates the joint sales (3.2 TDCi, automatic, finishing Wildtrak double cab), is displayed at € 33,105 VAT excluded. Considered a utility, Ranger lets you enjoy a tax policy for the least favorable.

Surprisingly nice to drive on the road, very effective outside and with a broad equipment, Ranger approaches increasingly SUV that swarm on our roads. To deceive the customer? If it ignores a comfort summary strand and a sometimes crippling congestion, why not? Especially since he benefits from taxes at the grass roots, her face wants touted as desired and is rather well tariffied.