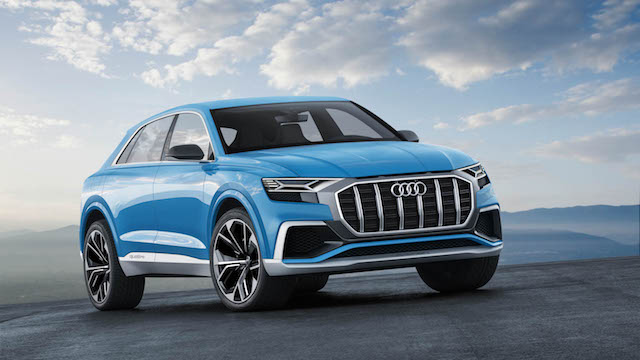 Audi unveiled the concept car, Audi Q8 concept that prefigures the future luxury SUV that will be marketed next year.

Called to battle in the cut SUV market, the Audi Q8 concept adopts a fluid silhouette that masks its template. If its height of 1.70 m conforms to the standards of the segment, its 5.02 m of length classifies it as the longest SUV cut with 10 centimeters more than the BMW X6. The wheelbase of 3 m promises a beautiful habitability especially since the Q8 will offer only 5 seats. The 5.02 m length allows the Q8 concept to display a generous 630-liter boot.

The Audi Q8 concept inaugurates the next stylistic canons from the brand to the rings. The octagonal grille takes volume to go down to the middle of the shield and become the most imposing grille ever affixed on an Audi. Its 5 vertical bars shelter a honeycomb pattern. Thin headlights give the Q8 a very aggressive look with their blue laser signature in the form of x. At the rear, the lights take the form of a light strip across the width of the cut SUV, which serves as braking and direction indicator.

Featuring a touchpad with fingerprint recognition, the doors without pillars open onto a luxurious cockpit. It is home to four individual leather / nubuck seats and features four touch screens. The first touch screen brings together all the informational features. The second screen replaces the air conditioning controls. The third replaces the lighting of the headlights. Finally, the fourth seat in the rear seats controls the rear air conditioning.

During the presentation, Dietmar Voggenreiter, Global Head of Sales and Marketing at Audi, explained that this new architecture would arrive in production on the highly anticipated new Audi A8 . The Q8 will also accommodate this new touch cabinet. The instrumentation also evolves as the Q8 concept inaugurates a new generation of Virtual Cockpit based on a 12.3 screen with a resolution of 1920 x 720 pixels.

Technically, the Audi Q8 concept is powered by the 3.0 TFSI V6 of 333 hp and 500 Nm coupled to an electric motor of 100 kW (136 hp) and 330 Nm. The combined power reaches 450 hp while the torque displays a Value of 700 Nm. The whole is associated with a box Tiptronic eight-speed and of course a Quattro transmission. Audi announced a 0 to 100 km / h in 5.4 seconds and a limited speed of 250 km / h. The Q8 concept is equipped with a lithium-ion battery housed in the back. With a power of 17.9 kWh, the manufacturer announces a range of 60 kilometers in electric mode. Audi is delivering a combined range of 1,000 kilometers. In addition, the Q8 concept is based on an adaptive suspension that offers an adjustment amplitude of 90 mm

The future Q8 will be produced at the Bratislava plant in Slovakia on the same production lines as the Q7, the Porsche Cayenne and the Volkswagen Touareg.