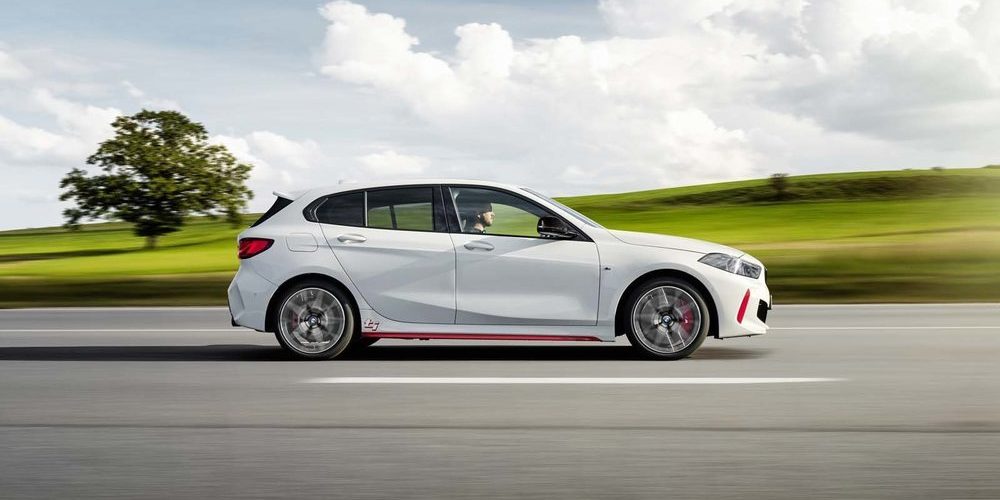 BMW recovers the acronym ‘ti’ (Turismo Internazionale) to illustrate one of its most sporty models of the moment. It is a saga with a long tradition since the 1960s, with models such as the long-awaited 1800 TI, 2002 TI or the 325 ti Compact from the late 1990s. And now it concludes with this attractive 128ti that the German brand has just finished. launch in our market.

Thus inherits the 2.0 turbocharged inline four-cylinder engine, which in the 128ti offers 265 hp and 400 Nm of maximum torque. The change is the well-known Steptronic with an eight-speed torque converter, although both elements have modified the electronics to optimize it to its new characteristics. The maximum speed is limited to 250 km / h and it is capable of accelerating from 0 to 100 km / h in 6.1 seconds. And since we are with numbers, the average approved consumption is 6.9 liters in the WLTP cycle and the environmental label, the C.

The chassis also takes on the M sports suspension of its older brother, which lowers the overall height by 10 millimeters, as well as the size of the anti-roll bars, and incorporates a Torsen mechanical limited-slip differential, and features a special steering configuration. The 128ti is 80 kilos lighter (it weighs 1,520 kilos) than the M135i xDrive, precisely because it dispenses with all-wheel drive. As is customary in the new 1 Series, the rear drive is now a mere memory and all the potential is directed to the front wheels. Beware that it goes to the movies, but make no mistake: it is less sporty. 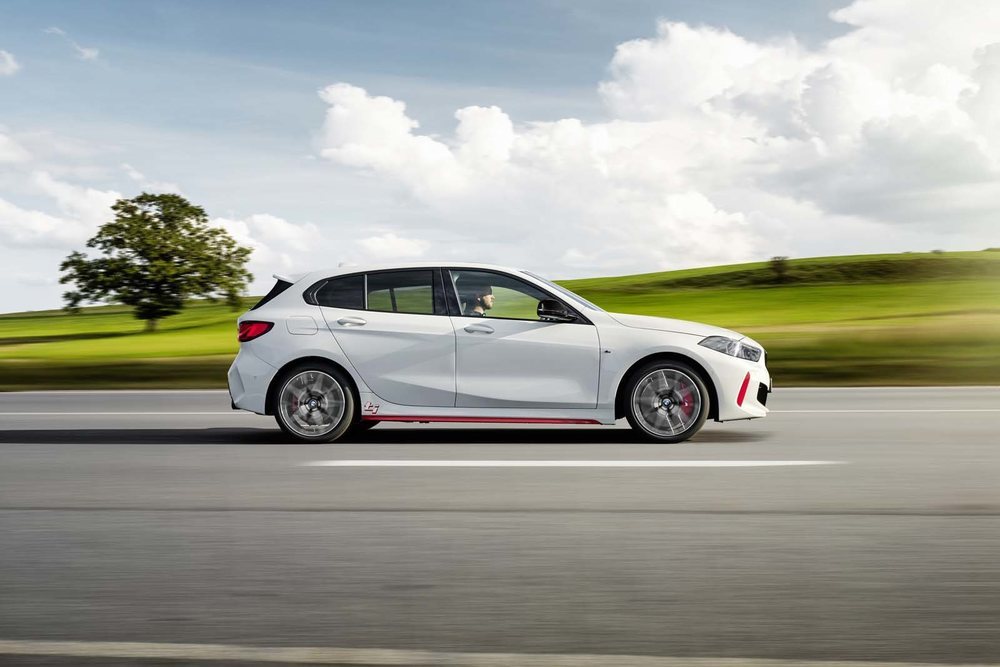 The brakes are also M Sport, with the calipers painted in red (it is the first in Series 1), a color that accompanies the 128ti in numerous adjustments, as we will see later. Finally, the 18-inch wheels with 225/40 R18 tires signed in the test unit by Michelin Pilot Sport 4. 19-inch wheels are available as an option. With all these wickers it is clear that things do not look bad at all. And in his sights he finds rivals of the caliber of the Volkswagen Golf GTI.

The 128ti’s aesthetic is also redecorated with its own personality. It is available in six different colors, always finished with red details, characteristic of this version. Only when the exterior color of the vehicle is red or blue, the details are finished in black to combine them in a more visually attractive way. Starts from the M Sport trim, but adds specific trim, trim and skirts. The Full LED headlights have a darker appearance and the rear is finished with a diffuser, a double exhaust outlet and a spoiler on the roof. All this causes this model to measure 4.32 meters in length, 1.80 in width and 1.43 in height. The wheelbase is 2.67 meters.

The interior also plays with its own brushstrokes … yes, in red, The seams and stitching in that color accompany the seats, door panels, armrests, steering wheel, dashboard and the big ‘ti’ logo on the armrest central, in case there was any doubt. There are no changes in the arrangement of the controls or in the habitability or trunk, which cubes 380 liters (1,200 if the rear seatback is folded). The presentation is completely digital, with a 10.25-inch touch screen on the dashboard that is also managed from a rotary knob located on the center console. It also includes voice commands and a gesture control that seems more anecdotal than practical. And nothing to object to the quality with which the set is finished, of remarkable high. 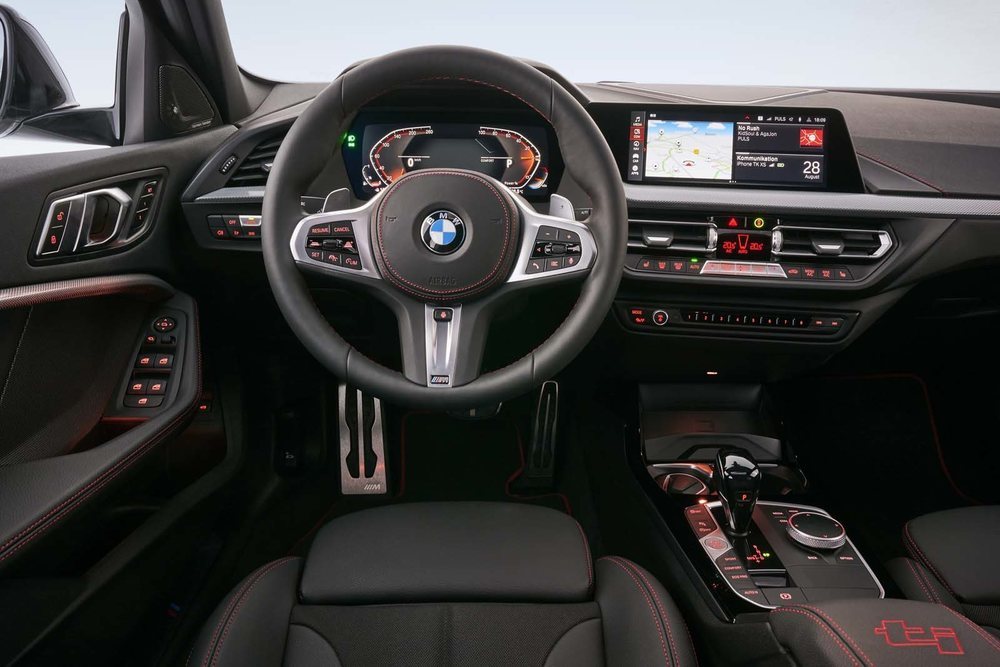 We set off to face our first contact. Basically it is a long journey by motorway, with an escape to a mountain pass with a winding route. On the highway, it is a ‘normal’ Series 1 for feel and comfort, although the sound of the engine and the reaction when stepping on the accelerator remind us of what we are dealing with. With the ECO PRO program of the driving assistant we have driven with an average of 6.0 liters on the trip computer at 120 km / h.

Make no mistake, the 128ti calls for gear and cornering. It is not that the ascent and descent to Alto de los Leones has left us free, between radars and intense traffic, but we did force in tight turns to gauge the effectiveness of the Torsen differential. Already with the Sport profile activated, we found that the traction losses are very limited and it is really agile. Perhaps the least attractive is the steering, communicative and tactile, but not too direct for a sports model (2.7 turns of the wheel between stops).

The firmer setting of the suspension largely limits the body roll, does not include adaptive shock absorbers, and we are left wondering how riding on a more uneven surface will affect comfort that we do not find on the way. In any case the chassis, with a multi-link rear axle, is one of its strengths.

The engine-change set meets what is expected, especially if we activate the manual function and the sports mode. If we demand it, it goes up to 6,500 rpm, at which point it jumps out of gear to protect the engine. It can be changed sequentially on both the lever and the steering wheel paddles. If we encourage too much consumption will increase to 9.9 liters. It also offers a third driving profile, called Comfort, the only one that cannot be individually regulated.

In short, the 128ti is a highly desirable vehicle for its dynamic qualities, performance and exclusivity. Without reaching the radicality of the M135i xDrive, you can have a great time behind the wheel, while also offering ride comfort and consumption that is very manageable on a day-to-day basis. And so that nothing is lacking, it surrounds itself with very advanced and generous equipment, both in terms of safety, driving assistants or connectivity.