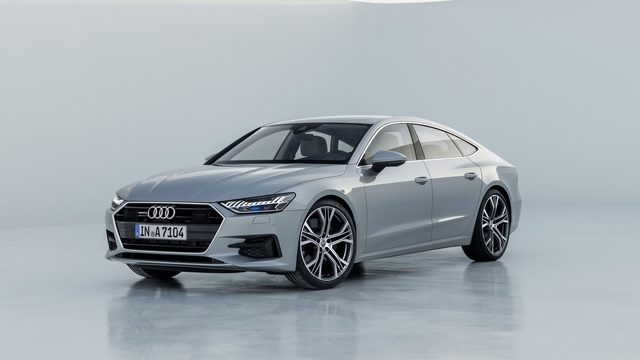 Audi A7 Sportback. After a series of teasers, Audi has unveiled its second-generation A7 Sportback. A model that must bring a wind of novelty while retaining the same recipe.

The Audi A7 Sportback takes the stylistic codes inaugurated by the new A8 . The front end is even more aggressive, and the rest of the vehicle stands out from its big sister with dynamic contours inherited from the first generation of A7.

In its highest levels of finish, the latest addition to the German firm will be equipped with 21-inch wheels to accentuate an imposing silhouette of nearly 5 meters (4 meters 969) in length, 1 meter 908 in width, 1 meter 422 in height and a wheelbase of 2 meters 926.

Many things in common with his older sister A8

As on the A8, we notice at the back a band that extends over the entire width of the trunk. This area retains what made the charm of the first generation A7 with a line inspired by a coupe, adorned here with a spoiler deploying at 120 km / h. The trunk can load up to 535 liters of content, and 1,390 liters after seating the rear seats folded.

In the cockpit, no change of scenery either with a provision similar to the last A8. The vents are located on the top of the dashboard while two screens are positioned below. The first to control the navigation system, the second to manage functions such as air conditioning or heating.

All A7s are equipped with the MMI radio system as standard, and the most expensive versions will feature a Bang & Olufsen audio system. Optional, MMI navigation and MMI navigation plus. The latter also features Virtual cockpit instrumentation and its 12.3-inch screen.

Side gadgets, the Audi A7 will propose by 2018 the AI ​​device with remote parking function. Finally, no less than 39 driving aids are available to allow the sedan to be at the forefront in terms of semi-autonomy.

Under the hood, the newAudi A7 Sportback  includes, again like the A8 , on all trim levels a semi-hybrid MHEV system running on a 48-volt battery and a power assisted alternator offering a power gain of 12 kW. This allows Audi to reduce the average fuel consumption by 0.7 liters per 100 kilometers.

For the moment, only the 3.0 V6 55 TFSI is planned in the catalog. It develops 340 horsepower and 500 Nm of torque and is associated with a seven-speed S tronic automatic all-wheel drive.

The arrival in concessions of the new Audi A7 Sportback is expected for the month of February in Germany at a rate of 67,800 euros for the entry level. It will be assembled in the Neckarsulm factory.