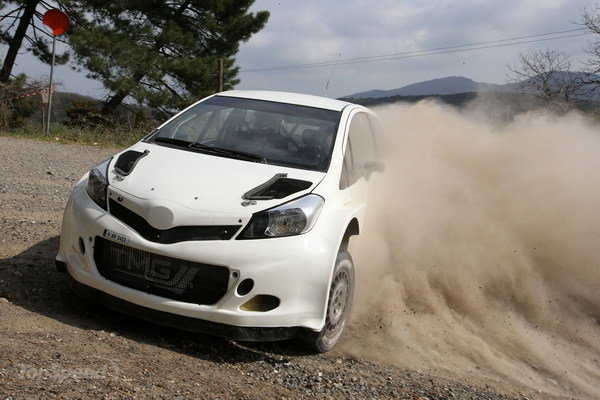 Toyota Yaris WRC 2015, A full 18 years after Toyota discontinued its participation in the WRC, the Japanese automaker is looking to make a comeback with this battle-ready Yaris. Plans are currently set to see the pumped-up subcompact make its competition debut in 2017, with development now proceeding under the guidance of Cologne-based motor racing team Toyota Motorsport GmbH (TMG). Previously known as Toyota Team Europe, TMG is responsible for garnering each of the marque’s titles in this highest form of rally racing.

The last time a Toyota was seen scrambling for traction on a stage of the World Rally Championship was in 1999, with the Corolla WRC. That particular vehicle represented the carmaker’s final entry in the sport after more than 25 years of continuous rally competition, excluding a one-year ban in 1995 following the discovery of illegal turbo restrictors. Despite this singular blemish, Toyota’s overall record is good, including three manufacturer’s titles and four driver’s titles, thanks in no small part to the venerable TMG-prepped Celica GT-Four.

An assortment of drivers and engineers are currently joining the team ranks to prepare for 2017. But will Toyota keep pace after an absence of nearly two decades?

To prepare the Yaris for some of the harshest conditions in all of modern motorsports, Toyota is going full hog. According to a press release, the “chassis has been formed using advanced simulation, testing and production techniques.” Overall, the dimensions are similar to the production road-going Yaris, but include a shortened wheelbase for crisper turn-in. The fenders are flared-out to encompass a bigger wheel and tire package, yielding a wider track for enhanced grip.

The body is made up of typical badass WRC components, with composite panels, large heat vents in the hood, a roof-mounted scoop to provide the cabin with fresh air, and downforce-generators consisting of a reworked front bumper and a large rear spoiler on the hatch.

The livery is a new design, perhaps created as an acknowledgement of the car’s “clean slate” philosophy. Overall, the package bears all the right elements of something you’d see pounding over the mountains of Monte Carlo or flying through the Italian air at Sardegna.

All business, no nonsense: that’s the formula for the interior of a WRC car. Steel bars crisscross throughout to keep passengers protected in the inevitable rollover, with racing harnesses strapping all those precious limbs into fixed bucket racing seats. A thin-rimmed steering wheel protrudes from the carbon-fiber dash, with two large levers in place for cracking up and down through the cogs and locking the rear wheels. Data pours in from digital readouts, buttons and switches pop from every crevice, and a fire extinguisher system is readily at-hand. Just another day at the office for a pro rally pilot.

Transformed from high-efficiency commuter to fire-breathing world eater, the Yaris WRC is equipped with a turbocharged, direct injection, 1.6-liter four-banger that spits out well over 300 horsepower and 309 pound-feet of torque at 6,000 rpm. Maximum boost pressure is 2.5 bar (36.3 psi), while redline is set at 8,500 rpm.

As with all successful rally cars, the development of this powerplant involved a focus on torque figures. Powering out of a slide calls for a lot of low-end muscle, and during competition, wandering through the gears to find that power-band sweet spot is, at best, distracting. With that in mind, engineers focused on creating a torque curve that was as broad and flat as possible, a task hampered by the 33 mm (1.3-inch) air restrictor called for by regulations.

Making the AWD connection is a six-speed sequential gearbox and ZF Sachs clutch. Dropping the anchor are 300 mm (11.8-inch) disc brakes for gravel duty, and 355 mm (14-inch) rotors for tarmac. The size difference is reflective of the different wheels in play for each surface type.

While this purpose-built competitor may have similar body lines to the vehicles available for a test drive at your local dealership, the hard bits under the skin are as dissimilar as water and oil. But who knows — given the extensive amount of development time and money poured into the Yaris WRC, perhaps we’ll see a boosted AWD variant for the public sometime in the near future.

TMG hopes to develop the Yaris WRC over the next two years, betting that the change in regulations expected for 2017 won’t significantly alter all the hard work currently underway. Even though two years is a long time, there’s still a lot required to make this new entrant competitive. Add the pressure of running a full season of the World Endurance Championship, and it’s obvious the team will be stretched to the ragged limit.

However, the Yaris WRC has already completed testing on both tarmac and gravel stages throughout Europe. Driver selection includes an assortment of young talent, including Eric Camilli, Stéphane Sarrazin, and Sebastian Lindholm (you gotta have at least one “Seb,” right?).

In the meantime, you can bet all eyes will be on the Polo R of Sébastien Ogier. Make sure to check TopSpeed for updates on each of this year’s 13 rounds.