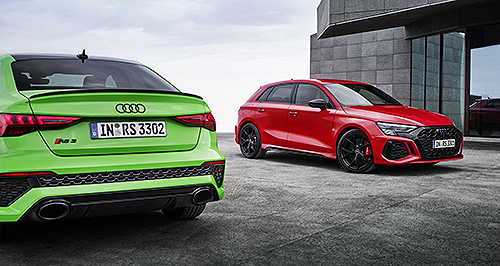 he new generation of the 2022 Audi RS3 maintains the 400 CV of power of the 2.5 TFSI but that ‘freezing’ palliates it with an unmatched dynamics. Here we tell you its details.

After talking to you a few weeks ago about the ins and outs of the new RS3 2022 , Audi has finally revealed all the details of what will be, for many, the true king of Premium cut hot-hach . A rivalry that he has maintained for some years with the Mercedes-AMG A 45 S and that, for now, it seems that it will continue to belong to the star’s compact.

And it is that the new RS3 2022, available in both Sportback and Sedan bodywork , it seems that it has not given too much importance to inflate its exquisite 2.5 TFSI five-cylinder engine with horses , but has maintained its performance at the current 400 hp . Power that arises between 5,600 and 7,000 rpm accompanied by a maximum torque of 500 Nm between 2,260 and 5,600 laps.

With figures like these, it is not surprising to observe a scandal performance, with a 0 to 100 km / h of 3.8 seconds and a maximum speed of up to 290 km / h if the RS Dynamic Package is equipped (standard starts with 250 km / h). But as we said, Audi has focused on offering the most dynamic RS3 in history and for this they have completely changed the all-wheel drive system.

The new RS3 2022 will debut the so-called Torque Splitter in which the multidisc clutch of the Haldex system of the previous RS3 is replaced by a torque distributor that has two clutches managed by its own control unit. In this way, the engine torque is optimally distributed on the rear axle. During more dynamic driving, the torque of the outer rear wheel increases, subject to a greater load, which significantly reduces the tendency to understeer . In other words, when cornering to the left, it transmits more torque to the right rear wheel; in curves to the right, to the rear left. In a straight line it distributes it between the two wheels.

An unprecedented technology with which more moments of fun are also achieved thanks to the so-called RS Torque Rear program . In this case, the torque splitter directs all the power to just one of the rear wheels, distributing up to 1,750 Nm per wheel, thus achieving controlled skidding .

A program to which is added the RS Performance mode created specifically for track driving . Activating it changes the configuration of the engine and gearbox to make it more reactive. Function that takes center stage if we equip the semi-slick tires, available for the first time for the RS 3 as a factory option.

Without abandoning the dynamic section, the RS3 2022 also debuts a suspension system with new shock absorbers, stiffer bearings and a valve system for a faster response. In this way, the height of the body has been lowered by 10 mm compared to an S3 and 25 mm compared to a conventional A3. In addition, the wheel drop has been increased by almost half a degree, resulting in a more precise response. As an option it will have the adaptive suspension with electronically controlled dampers to which is added an unprecedented Modular Vehicle Dynamics Controller (mVDC) that synchronizes the torque splitter, the adaptive dampers and the selective torque control of the wheels to achieve a direction and precise handling. In short, it increases the agility of the vehicle, especially on winding roads.

With this new generation of the RS3 2022, Audi has not wanted to hide its cards and although it is not as aesthetically radical as other rivals, it does seem that it has a more forceful appearance than in previous generations . To highlight the powerful front, with gigantic air intakes or daytime running lights that simulate a checkered flag. The 19-inch rims include perforated and ventilated brake discs that, optionally, can be carboceramics with a diameter of 380 mm with which, in addition, 10 kilos are saved to the whole. In addition, these add more colors to the brake calipers.

More details of the exterior, the oversized rear diffuser with two oval tailpipes or the massive use of carbon fiber to make up some of its elements (mirrors, the diffuser itself, side sills, rear spoiler on the RS3 Sedan …). Finally, the Kemora Gray and Kyalami Green body colors are exclusive to the RS 3.

Inside, what is known in an Audi RS model: digital panel with specific menus, sports bucket seats, Alcantara steering wheel, ambient LED lighting with unique tones, the RS Mode command embedded in the steering wheel itself or the fiber moldings. carbon.

The first units will hit the market during the month of August and Audi has established a starting price of 77,500 euros for the Sportback, five-door body, and 78,600 euros for the RS3 2022 Sedan.