Tesla’s chief designer, Franz von Holzhausen, has recently confirmed that the 2020 Tesla Roadster “will be even better” than the prototype that advanced it at the end of 2017. A whole declaration of intentions considering that the 2020 Tesla Roadster already announced infarction performance: acceleration from 0 to 100 km / h in about 2.0 seconds and more than 400 km / h top speed.

Von Holzhausen, interviewed in the unofficial podcast dedicated to Tesla, Ride the Lightning , has thus implied with his words that, finally, the new 2020 Tesla Roadster will offer specifications higher than those advanced at first two years ago.

Some statements that are in tune with those perpetrated by Elon Musk himself who, earlier this 2019 commented on his Twitter account that the new 2020 Tesla Roadster could even fly , mentioning another tweet with the DeLorean of ‘Back to the Future’ raised from the ground .

In fact, he stated in the same thread that he was not kidding and that this technology was possible, although we later learned that he was referring to the additional gas propellers in the style of space rockets, which would include the Roadster in the additional SpaceX package.

Given how well they handle marketing from the Palo Alto brand, these claims by Tesla’s chief designer could go along this line. Although it is also intuited that the words of Von Holzhausen come to justify in part the delay suffered by the Tesla Roadster , whose production start was set for 2020.

Specifically, and according to the Ibtimes publication based on the interview in Ride the Lightning, von Holzhausen has stated that the Roaster “is evolving deservedly, but needs more time”, in addition to adding that ” It will be even better than what we have presented . In every way . ”

It is true that “in every way” is speaking in very broad terms, but the logical thing is to think that it refers to benefits and autonomy, as well as technology and performance. Although in the case of the chief designer, he could also refer to the aesthetics of this electric sports car. 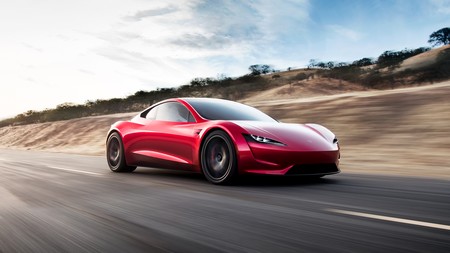 Be that as it may, von Holzhausen has stated in this podcast that this electric coupe that accommodates four occupants has been constantly evolving since it was announced in November 2017. He has also pointed out that these changes will make the production variant of the Tesla Roadster 2020 is much more impressive than the proptotype shown almost two years ago.

“It is an incredible machine. This car is like no other . I think it shows the capacity of what can be an electric vehicle,” added von Holzhausen.

And we must remember that in another chapter of Ride the Lightning , Elon Musk was also interviewed and already announced that the Roadster 2020 would show an almost unfair performance for combustion cars : “We are going to do things with the new Roadster that are unfair for other cars. (It is) overwhelmingly good compared to the next best gasoline sports car. ”

Because being “the fastest car on Earth” is not enough

Among these developments that the new Tesla Roadster has incorporated in its development are the aforementioned additional gas thrusters , which were confirmed as additional equipment for electric sports this summer by Elon Musk.

These, which “will be subtle and will be hidden behind the license plate”, are cold air propellants that transport aerospace technology to the world of cars. For Tesla it is partly simple thanks to SpaceX, the other great company of Musk and that has promised to take humanity to Mars.

According to Musk, and as collected by Electrek , these thrusters, equivalent to small rocket engines, would allow dramatically improved acceleration, as well as maximum speed, cornering speed and braking capacity.

And we must not forget that when it was presented in society in a first preview, the Tesla Roadster was introduced as the “fastest car on Earth” . All this before the additional thrusters and these statements by Franz von Holzhausen.

On paper, and with the figures we know at the moment, the Tesla Roadster boasts an acceleration from 0 to 96 km / h (0-60 mph) in 1.9 seconds , being therefore around 2, 0 seconds in the 0-100, and its maximum promised speed is 402 km / h . If the statement by von Holzhausen is true, the Roadster should exceed both figures.

Compared to those of the Porsche Taycan , one of the most performance electric vehicles ever conceived to date, the gap is notable: in its most powerful variant, the Turbo S (with 560 kW (761 hp) delivery and 1,050 Nm of maximum torque ), does 0 to 100 km / h in 2.8 seconds, while its tip (electronically limited) reaches 260 km / h.

Although it is true that the sports saloon plays in the Model S league and not in the Roadster league, as evidenced by the battle that both cars are having to be the fastest four-door electric.