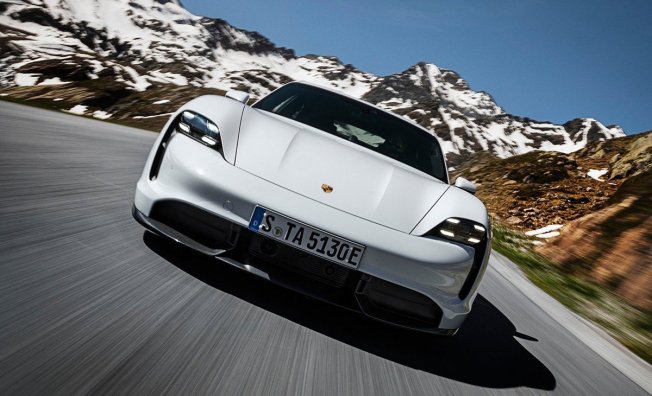 Porsche has entered the era of total electrification with the presentation in society of its first serial production electric car. This is the new Porsche Taycan. The first model of the Porsche E-Performance family. Approves a range of up to 450 kilometers according to the WLTP cycle. It is already on sale in Spain.

The wait is over. In recent months there have been numerous spy photos and official advances that we have published about the first electric car of Porsche . The Stuttgart firm is ready to enter the world of total electrification with its first zero-emission car. This is the new Porsche Taycan and it is already a reality. An interesting four-door sports car. It is already on sale in Spain.

The Porsche Taycan is the first model in the Porsche family of electric vehicles, called E-Performance. After the launch of the Taycan, the brand will focus its efforts on the other power company it is working on, the Porsche Taycan Cross Turismo , which will be unveiled at the end of next year. By 2022, Porsche will have invested 6,000 million euros in electric mobility .

Porsche places special emphasis on the exterior design of the Taycan which, despite echoing current philosophy, adopts its own personality. It transmits a clean and pure air. On the front we find wide and flat lines, which combine with really marked profiles. We must also make special mention of the line that adopts the roof and the fall of it to the rear. The lateral sections have been very sculpted.

Nor can we ignore both optical groups. Porsche has worked the aerodynamic section a lot and the result has been a Cx coefficient of 0.22. This contributes significantly to improving the efficiency and autonomy of the vehicle. Something that, in the end, is key in any electric car.

Leaving aside the exterior, if we venture inside the Porsche Taycan we will be surrounded by an environment in which luxury is breathed. It is very comfortable and the full technological equipment is obvious. The digital instrument cluster adopts a curved shape and is located in the highest part of the dashboard. For the info-entertainment system, a 10.9-inch screen has been chosen and, optionally, another one that will be used by the companion can be equipped.

The German firm has worked to reduce the number of conventional controls and buttons. The touch components make their way. In addition, Porsche offers for the first time the possibility of choosing a leather-free interior. Recycled materials have also been used in order to emphasize the condition of an ecological vehicle. As for the storage space, the Taycan has two luggage compartments . One front that cubes 81 liters and another rear of 366 liters respectively.

At the time of putting ourselves at the controls of the Porsche Taycan we can make use of a driving mode selector to choose between any of these four profiles: Range, Normal, Sport and Sport Plus. In addition, there is a fifth mode for custom configuration. This is the Individual profile.

An “electric heart” with 450 km of autonomy

Let’s go to the mechanical section of the Taycan. The initial range comprises a total of two versions: Turbo and Turbo S . The first one develops a power of 680 hp while the second reaches 761 hp through the overboost and Launch Control functions. The Taycan is the first production vehicle with an 800 volt electrical system, instead of the usual 400 V. Thanks to this, 100 km of autonomy can be obtained in just 5 minutes through a fast charging point.

In the bowels of the vehicle there is a battery of 93.4 kWh that allows the approval of an autonomy of 450 kilometers for the Turbo version and 412 km for the Turbo S version, according to the WLTP cycle . The maximum speed in both cases is 260 km / h and they have a total traction system. It is equipped with two engines. Each one acts on one of the axes.

With respect to charging times, the time required for the battery to be charged from 5 to 80% (under ideal conditions) is 22.5 minutes and the maximum charging power is 270 kW. The drivers of the Taycan will be able to use a charging point of 11 kW of alternating current (AC) in their homes to recharge the car.

Prices valid from September / 2019 without including discounts or other promotions.