BMW F 850 ​​GS Adventure 2019 has been included by the US Environmental Protection Agency in the list of models we will see on the roads next year. Chassis and engine will be those we already know, but the bike will be equipped with accessories ready for adventure. Among the other news … BMW Motorrad could showcase the F 850 GS Adventure at this year’s EICMA Show or Intermot. It will have the same engine as the standard F 850 GS. 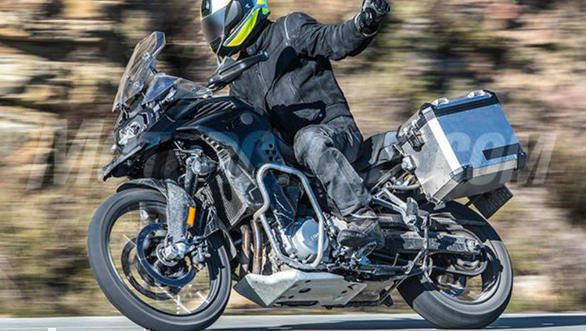 For some time now rumors have been circulating about a new possible BMW F 850 ​​GS Adventure, but until now it was just a matter of speculation. But now the news is certain, the US Environmental Protection Agency (EPA, Agency of protection of the American territory) has included in the list of 2019 models the new F 850 ​​GS Adventure.

Still nothing is known about the new model, it is easy to think, however, that the new 2019 BMW F 850 GS Adventure will share with the sister the chassis and the engine. The 853cc parallel-twin engine that does duty in the regular 750/850 models will be used in the 850 GS A as well. EPA certification mentions that this motor makes 88.5PS at 8,000rpm.

The 2019 BMW F 850 GS Adventure will compete with the likes of the new-gen Triumph Tiger 800 XCa and the Honda Africa Twin. If BMW Motorrad decides to bring the F 850 GS Adventure in India, it might attract an additional premium of Rs 1 lakh over the regular model.

The 2019 BMW F 850 GS Adventure will come equipped with a larger fuel tank, auxiliary lights, bigger windscreen, reworked bash plate design and crash bars. The website also reports that the rear subframe will be stronger to offer a better support to the pillion as well as the luggage.

It is also being speculated that the 2019 BMW F 850 GS Adventure will be 15kg heavier than the the standard model and will have a kerb weight of 244kg. Since this one will be taller and wider, we believe it will have additional suspension travel, making it more suitable for off-road and trail riding.

We are likely to see the new BMW F 850 ​​GS Adventure, and the other innovations of the House of Monaco, in the upcoming autumn shows: Intermot in Cologne (3-7 October) or Eicma in Milan (6-11 November). We just have to wait a few more months.