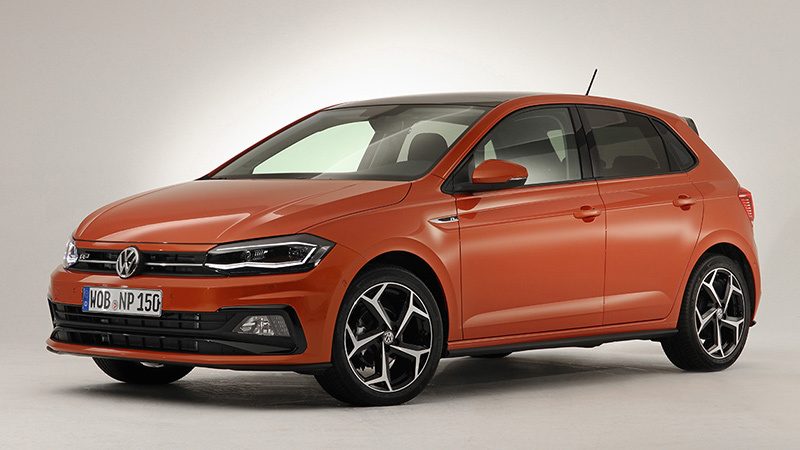 The new 2018 Volkswagen Polo is larger than the  Polo 2014  and may have more safety and comfort equipment. It is an expensive car in relation to its alternatives (prices start from € 14,740). Disappears the possibility of choosing body, given that there are no three doors or a variant as the  Cross Polo 2015  that had more ground clearance. There is only the five-door Polo. In 2018 will arrive an all-terrain model called T-Cross based on this generation of Polo .

Initially there are only gasoline engines – with 65, 75 and 95 hp – to which will be added, in the remainder of 2017, the remaining engines to complete a supply of five gasoline, two Diesel and one that can run on gas natural

This new pole is bigger on the outside: 8 centimeters more in length and 7 cm in width (height decreases by 1 cm). And on the inside: according to  our measurements  there is more leg room for second row passengers – thanks to the increased distance from the front to the rear wheels (from 2.47 to 2.56 m) – more width and more height. The trunk has 351 liters, 71 more, and is now among the largest among its alternatives.

The range of engines is composed of five gasoline – with powers between 65 and 200 hp, two Diesel – 80 and 95 hp – and one of natural gas of 90 hp. The engine of natural gas and all gasoline, except the 200 hp (GTI version), are three-cylinder; the rest are four. The transmission can be manual of five or six marches or automatic DSG of seven (of doubletype clutch ). Traction is always on the front wheels. The following table lists all possible combinations of engine and gearbox.

We have driven the versions of 75 and 95 hp. The engine of the first is atmospheric and that of the second supercharged. Both vibrate and hear little. We have tested them on German roads with traffic and limited speed at 60 km / h, so unless you roll gently and it is quiet, we can not tell you any more about the dynamic qualities of the Polo, except that the 75 hp can be a good choice for whoever is going to use the Polo in the urban environment, but outside of it its capacity of acceleration is insufficient to make habitual maneuvers with agility.

Volkswagen offers three levels of equipment -Edition, Advance and Sport;  and three additional customization packages – R-Line, Black and Style-. From the basic level (Edition) is the emergency brake booster with obstacle detection and pedestrians. The pilots are led and, optionally, the headlights can also perform all lighting functions using LED technology. The available tires range from 14 to 18 inches in diameter.

The most sporty and fastest version, the Polo GTI, has a gasoline engine of 2.0 liters turbocharged that gives 200 hp and a suspension that reduces the height of the body with respect to the ground. Its equipment is specific, has wheels of 17 inches as standard, checkered upholstery  and decorative elements in red, such as brake calipers, body appliqués and some details of the interior.

There are several multimedia systems available, which can be associated with different screen sizes, between 6.5 and 8.0 inches. They are compatible with Apple CarPlay, Android Auto and have the function Mirror Link that replicates the screen of a mobile phone. As with many Volkswagen Group models, the instrumentation can be analog or digital (Digital Cockpit). The most powerful sound equipment is developed by specialist Beats. In front of the shift lever is a space designed for wireless charging of mobile phones.

Among the safety and comfort elements that you can have are the active speed programmer  (has Stop & Go function, so in a brief stop, if the vehicle in front of the car starts to restart, the system automatically starts moving the Polo again). emergency braking in case of rear cross traffic, detection of vehicles in the blind spot of the mirror , semi-automatic parking system (the system moves the steering while the driver has to take charge of controlling the speed using the pedals), the opening and keyless start and the assistant of change of lane involuntary .

The Polo 2018 Polo is built on the basis of the MQB A0 platform, the same as the  SEAT Ibiza 2017 . It is manufactured in the plant that Volkswagen has in Pamplona.

We have calculated the cost of an all-risk policy (without excess) from the previous Polo with the 1.0 TSI 95 hp engine, which can serve as a good reference. Entering the data of a single man, residing in Madrid, 33 years and traveling less than 20 000 km a year, we have obtained that Qualitas Auto is the most affordable company. His policy costs 425 euros a year, a price not far removed from Balumba (446 €), although in this case Qualitas Auto gives a higher quality coverage (7.49 points out of 10, instead of 6.04 that of Balumba).

Volkswagen Polo (2018) | Impressions of the interior

The new Polo is wider than the previous, especially by the gain in width. At this level,  is among the best. And it is the one that has the most separation between the ISOFIX anchors on each side (that is, the one that more hollow leaves between two seats).

It is also one of the best for the height available – especially in the second row where even passengers of almost two meters in height can be accommodated – and in space for the legs.

The rear seats are easily accessible. The doors  open about 70 degrees, the roof does not descend much and there is enough room to move the foot between the sidewalk and the central pillar of the body. Instead, it has a central tunnel that rises a lot off the ground and that can be an annoying obstacle to move from one side to the other of the car.

The interior lighting is provided with two light fixtures, one for each row of seats . For the rear seats there are no sockets (neither USB nor 12 V). In front there are, and even a wireless recharging area for compatible phones (optional).

I found it easy to feel comfortable at the wheel. Once the seat and steering wheel had been fitted to my liking-both of which can be moved on ample routes-all the controls were left to hand, and I found nothing to hinder the movements of the arms when driving.

At least at the poles where I climbed, the dashboard was made of soft plastic at the top and underneath the decorative piece on top of the glove compartment. This piece can be of various colors and has given me the impression that it resists well the frictions. In contrast, the hard plastic that covers the rest of the areas can be a light color (almost white;) that I do not recommend because it is very easy to brush and leave marks on it.

The trunk that is seen when opening the gate has regular shapes and a normal capacity. There is a spot of light on the right side and two places to hang a bag. Unlike what happens in other cars of this size, this area of ​​the car does not seem careless either by materials or its solidity.

Underneath the floor, there is a very wide gap of circular form since it is the space reserved for the spare wheel. With this hole it is with which the 351 liters of capacity are obtained. The  SEAT Ibiza  and the  Suzuki Baleno , both with 355 l capacity, are the only two models of  this list of similar cars  that slightly outstrip the new Polo. Compared to the  Nissan Micra  (300 l) or  Mazda2  (260 l), for example, the difference is significant.

The spare wheel is optional and can be of exceptional use or one of the same size as the rest.