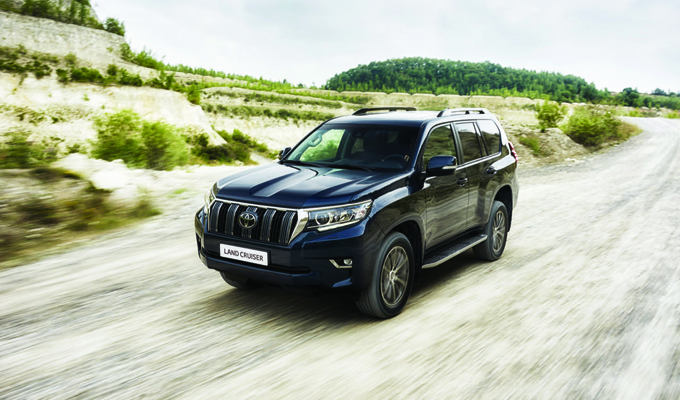 2018 Toyota Land Cruiser, The car body is redefined in general, but especially in the front area where a new bonnet stands out, a new calender and redesigned optical units; has larger dimensions than the old generation. Aspects that confirm Toyota’s intentional evolution of Toyota Land Cruiser , even more technologically rich and realized on the functional pattern called “body on frame” .

Along with the 2.8 D-4D engine from 177 hp (130 kW) and 370 Nm of torque , the motricity is backed by a limited Torsen slip differential, coupled with a sophisticated Multi-Terrain Select (MTS) solution . System implemented in turn with auto mode, activated by a 5-speed Crawl Control function. Among the features include Under Vehicle Terrain View , Front View Rotation , Panoramic View Monitor and Wide Rear View Display .

The eclectic qualities of the new Land Cruiser are also linked to the “body on frame” structure , which allows the car to disengage regularly in different situations. The mentioned versatility is then associated with various driving assistance systems that accentuate road quality. Not to mention the generous size, as the new Land Cruiser is 60 mm longer than the previous model, or 4.840 mm, or slightly smaller than 4.565 mm, when it comes to the three-door version variant. So how is the 5.8-meter or 5.2-meter radius on the three-door model accented . Also important is a minimum floor height of 215 mm, which is slightly smaller than the three-door 205 mm version, along with the output , output angles of 31, 25 and 22 degrees , based on the aforementioned indications.

The order phase was taken last October 16 and, in the case of the top model of the 5-door Style range , the figure starts at 62,500.00 Euro, as indicated. Inside, along with new seats with ventilation system, an automatic climate control system, in addition, the redefined dashboard features an 8-inch Toyota Touch® 2 & Gomultimedia system , a 4.2-inch multi-information screen with steering wheel controls and Optitron dials .