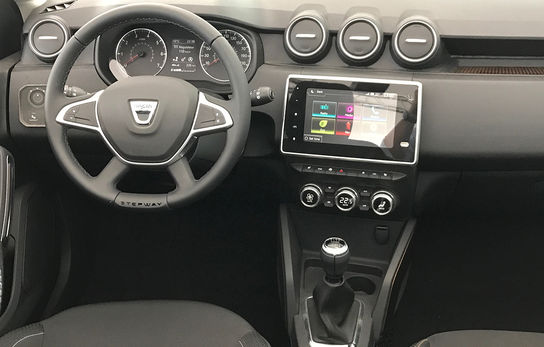 Two weeks after we officially got to know the outside of the 2018 Dacia Duster , it’s time to get into the car to dissect details of the interior.

And we have excellent news.

The interior was one of the old Duster’s minuses. If on the outside the lines did not bother and seemed specially designed on the “hard” profile of the car, the interior remained one of the great compromises of the car. And the best example in this regard is the positioning of the central display. A technological element introduced with the facelift on Duster 1 and which has been integrated into the quite limited possibilities that designers have on the profile of a board launched on the market with no such development plans.

The result was a borrowed display on the Sandero / Logan range, but it was too low to mark points on ergonomics. In addition, Duster suffered from perceived quality because the materials, on-board technological systems and interior design elements were outdated. Even if the latest adaptations – see EDC transmission in the Duster range starting in the spring of 2017 – somewhat refined the range and brought new customers for the SUV produced in Mioveni.

But 2018 Dacia Duster is seriously changing inside.

Unlike the exterior, where the Renault Group designers have chosen a “conservative” path and have dared to evolve the concept behind Duster, the interior changes radically in appearance, ergonomics and perceived quality. Even though Duster remains faithful to the basic logic of a machine designed to be durable, with harsh materials in the foreground and without too many “fines” in the chapter of chromatic personalization options, how designers have put pieces of the puzzle shows us a completely different machine from the previous one.

Major differences in all chapters. Duster generation 1 with facelift (up) and new Duster 2.

●  The board changes completely. Five new aerators appear, three of which are centrally located. Do not expect any technical visual artifice: Dacia preferred efficiency in front of the show, so the piece itself is one of very few elements.

● Duster will enable keyless start by a Start button. We have not yet learned whether the Romanian model will also allow key access with proximity sensors.

●  The display position changes and the display is positioned above the driver\’s visual range. By the way, there will be two phases of the launch of the new Duster. The first involves an interior whose touch screen is taken up in the sea from the previous generation, but re-positioned in space. The second phase is the launch of a glossy display that clearly increases the perceived quality of the interior. According to designers and project director, it will be officially launched on the market after mid-2018, about the same time that Renault will officially present the Renault Duster version dedicated to markets that Dacia is not present.

●  Also in the displays chapter, a central one should be displayed, placed between analogue clocks. It is black and white, looks very much like what we have seen on Nissan Qashqai so far, and provides vital machine-related information, such as fuel level, onboard computer figures, travel speed, or optimum gear shift time.

●  There is an automatic climate control system that changes the level of comfort Duster offers to its customers. With it, there are three rotating buttons with an integrated center display that is a radical improvement over the old Duster. They feel “excellent” at touch and handling, the haptic level is net superior to SUVs with pretensions. One deals with the speed of the fan, the other with the temperature, the other with the air direction. Its integration into space is excellent.

●  At the secret presentation in Paris, which took place more than two months ago, I saw Duster\’s three interiors. One was a mock-up stand built specifically for demonstrations, the other was mounted on a camouflaged prototype, and the other was purely illustrative on a non-functional car, but which laid the groundwork for molds and subassemblies that a builder needed to do, and prepare production.

●  The additional buttons on the board also get a new look and are in turn a serious step forward for Duster. They are “clamshell” type and press down. It is not very clear what will be their order, because the three interior versions we had in Paris had different buttons. There is a button between the central display and the air conditioning rotate there, the stop button, the Stop button, the Eco button, the central door locking, the button that activates the four chambers of the Multi View Camera and the one that disable parking sensors.

●  Duster will have a new steering wheel. Although on the Paris mock-up stand you will see the Stepway inscription on one of the interiors, do not be fooled: Dacia is not about to release a Duster’s Stepway version.

●  In terms of materials, Duster will offer four different types of upholstery, two of which are leather: white with white seams, the other cream. It is not yet clear whether the cream will be available in Europe. The same happens with the trim on the end of the gearshift handle. There were two variants on the Paris sample – one chrome, perfectly matched with the rotating buttons of the climate, another glossy black. It was not yet known whether the black one would be offered as an option in Europe.

●  Materials remain generally closed and sober inside Duster. According to the designers, this solution is chosen by the development team after studying the preferences of customers in the major markets of the car. The same designers have confirmed that there will be different future limited editions that will offer color hints and a slightly higher level of personalization on the Mioveni SUV.

Information about the Duster technology package

●  At the technological level, the new Duster increases seriously compared to the old generation. And that’s what happens through the implementation of a package of systems that two years ago seemed science-fictional on a budget brand, like Dacia.

●  The most exciting system of this kind is the Multi View Camera, which uses four cameras (rear-facing, front-mounted and two-side mirrors) to provide the driver with important information when driving off-road or in crowded parking lots. The Dacia version of the Around View Monitor appeared in the Alliance for the first time 5 years ago on Nissan Qashqai is a simplified one. For example, the software used by Dacia does not “combine” these four images to compose a “helicopter” image of the car, but transmits four individual images accessible through the simple and easy-to-understand menu on the display. A demonstration of the system can be seen in the following clip:

●  Duster will provide a dead angle warning system. Using light mirrors integrated in mirrors, Duster will let the driver know if behind him there is a passing car on the next lane. The system works with sensors mounted in the rear.

●  Duster will have voice commands. Although we have not experienced this system, the dedicated button on two of the steering wheel displays at the Renault center near Paris has shown us this.