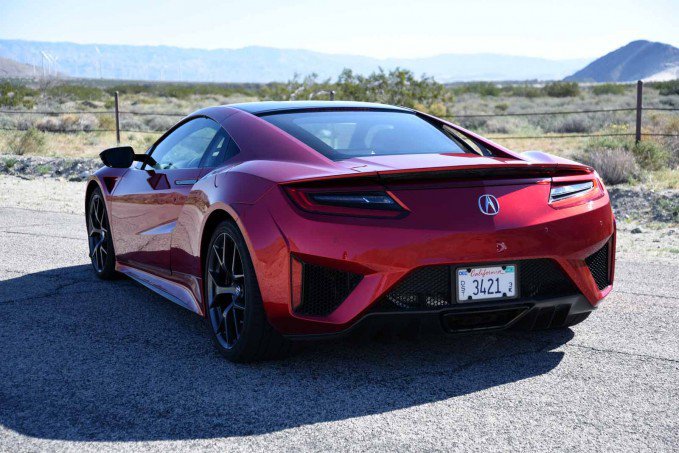 2017 Acura NSX Review. The new Acura NSX is all about immediacy. It uses electric torque, class-leading chassis rigidity and next-level all-wheel drive electronics to ensure it responds to inputs with urgency. It changes direction the second you ask it to, and the power hits almost telepathically.

Ironic, right? For a car that looks and goes so damn fast, it sure took its sweet time to get here. But as they say, you can’t rush greatness. Is that a phrase that can be applied to the new NSX?

Because it took so long to arrive, we’ve had plenty of time to digest all the details of this Acura supercar. We already know about the six cylinders and two turbos, the three electric motors and the nine speeds on its dual clutch transmission. And then there are the really big digits. Like its horsepower rating and price tag, both of which are equally exotic.

But none of that tells you what you really want to know, which is what it’s like to drive.

I could say it’s glorious or astounding, but for me, it’s all that and more, because driving this new NSX is truly a bucket list experience. Remember, we’re talking about the modern evolution of the greatest sports car to ever come out of Japan. (Fans of the Nissan GT-R and Toyota Supra can voice their displeasure in the comments section now.)

There might be turbo lag in this car, but you can’t tell. That’s because the rear electric motor gives instantaneous torque with 109 lb-ft available from 500 rpm that masks any delay. Add that to the mid-mounted internal combustion engine and system output totals 573 hp.

To keep you from oversteering yourself off course, the twin electric front motors can each add 54 lb-ft of torque to claw you out of a corner. That might not sound like much, but it works astonishingly well. More importantly, by differing the speeds of the inside and outside wheel, it can use electricity (both output and regeneration) to physically make the car corner. It does so when you’re on the gas, and even when you let off, seamlessly and independently matching to rotation of the front wheels to your steering angle to arc the car through a corner.

As a result, it feels far more stable than you expect for a mid-engine car. Normally, a machine with this much power requires a cautious throttle when exiting a curve, yes, even with sticky Pirelli P Zero Trofeo R tires. But not here. It actually challenges you to put your foot down earlier than you’d ever think you could. The car makes you feel like a much better driver than you actually are.

The real magic is that it does all of this naturally and seamlessly. You simply don’t notice the technology. The steering feels natural, and the regenerative brakes are as consistent as they are powerful.

Is It True to the Original?

Some may criticize the weight of the car, and they’re not wrong. At 3,800 pounds, it’s 600 lbs heavier than an R8 and certainly not light, however, it doesn’t feel heavy at all.

When pressed on issue, Honda PR boss Sage Marie (a bit of a racer himself) admitted that while it’s not like the original NSX in this one way, it does stay true to that car by pushing the industry in a new direction. Whereas the original NSX set the tone for super sports cars to come by offering thrilling performance in a lightweight, reliable and easy-to-drive package, this latest offering is bringing a new level of hybrid technology and handling capability that the car’s chief engineer, Ted Klaus, firmly believes will change the breed forever.

And while these new technological advancements do deliver incredible performance, they’re also where part of the blame lies when it comes to critiquing the driving experience.

As a driver, you feel almost too isolated behind the wheel. Blasting down the back straight at the Thermal Club raceway outside Palm Springs, if I didn’t have a speedometer in front of me, I never would have guessed I just did 125 mph. And the car’s cornering capabilities are almost to good to believe.

ALSO SEE: Top 10 Things You Need to Know About the Acura NSX

I walked away from my 15 or so laps behind the wheel thinking, “I know I’m not this good, but the NSX has me believing I am.”

I’m sold on its performance, but let’s not forget that one of the NSX’s claims to fame was that it was a livable supercar. So what’s it like to drive every day?

Civilized is the best word to describe it.

Acura says the NSX is the quietest car in its class, and that’s an easy claim to believe. The NSX comes with four settings that you control via a dial on the center console, and the most basic setting is actually called Quiet Mode.

Then you can switch to Sport, Sport , and finally Track, with each setting changing all the car’s parameters to be stiffer, quicker reacting and louder.

Unfortunately, even Track mode isn’t loud enough. In the cabin, you can’t even really hear the exhaust anyway. Instead it’s masked by the intake noise that’s piped in right behind you, much in the same way McLaren does (and I don’t love it there, either).

Another area where the car left me lacking was the launch control system. Yes, it’s fast, but I could feel a slight dip in acceleration after the initial launch before it really began to take off. Sure, it throws you back in your seat, but by comparison, the 911 Turbo feels like it just slapped you in the throat.

But back to the real world, whether it’s the super rigid chassis or the magnetic shocks, the ride is extremely comfortable.

Acura is also making a big deal of the sightlines out of this car, and while that’s certainly not as sexy as horsepower, think of it this way: The better you can see out of a sports car, the more confident you feel behind the wheel.

The A-pillars are extremely narrow, meaning you have very little blockage out the front and as a taller driver, I just love how the roof doesn’t overhang. When I come to a stop light in this car, I don’t have to lean forward to see what color it is. I can just look up.

Driven around town, you don’t get any of the jerkiness you’d expect from a dual-clutch transmission, all thanks to the use of the electric motors at low speed, meaning you don’t ever really have to use first gear.

Does This Supercar have a ‘Super’ Interior?

Acura made sure that, like the original, the new NSX has an environment that’s comfortable and user friendly. At 6 foot 1, I fit just fine, although it does require some ducking to get into and out of. What’s genuinely pleasant is that for all the futuristic technologies used to power the car, the cabin is remarkably simplistic in its design and even easier to operate.

The digital gauges are a nice touch and the optional matte carbon fiber steering wheel is certainly exotic. Unfortunately, the tilt and telescopic functions are manual, and the look and feel of some of the switchgear doesn’t live up to the car’s pricepoint.

Is it worth the astronomical price tag? While it’s certainly not expensive for its competitive set, we are talking $156,000 to start, which may seem like a lot for an Acura. Let me start by saying I might be the wrong person to answer this question. I haven’t mentioned the styling of this car at all yet because it’s totally subjective, but for me, it’s probably worth the cost of entry based on the looks alone.

Of course, you’re getting so much more than an exotic look. And I’m not just talking about supercar performance you can live with and drive every day. This car does such an incredible job making it all feel so natural that it’s easy to forget that when you’re driving the Acura NSX, you’re driving the very first in a new generation of exotic cars.

By Cheryl Chernobyl
In Acura