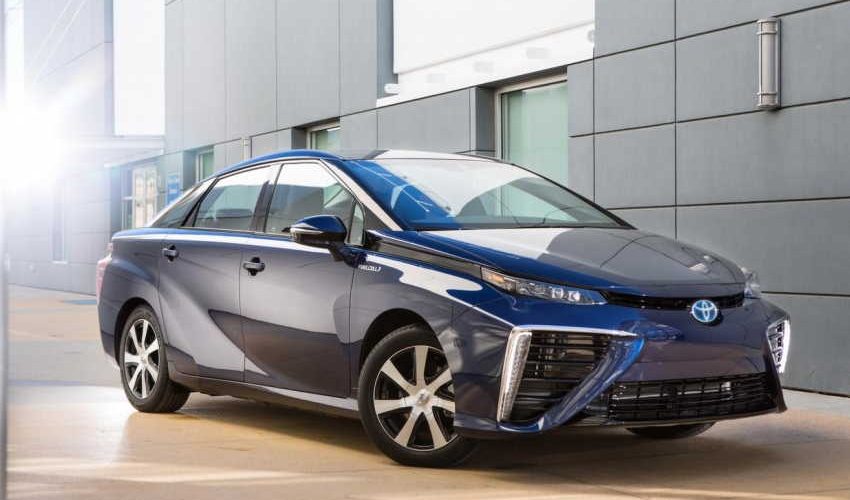 2016 Toyota Mirai Fuel-Cell Sedan – The Toyota Mirai (Japanese for “future”) is a hydrogen fuel cell vehicle, one of the first hydrogen fuel-cell vehicles to be sold commercially. The Mirai was unveiled at the November 2014 Los Angeles Auto Show. Toyota plans to build 700 vehicles for global sales during 2015 (wikipedia).

The hydrogen fuel cell race is really heating up. Within the past few days, Honda has unveiled its FCV Concept in Japan, BMW is reportedly planning a hydrogen-powered i5, and now, Toyota has officially announced its hydrogen fuel cell vehicle for the 2016 model year.

Dubbed the Mirai, which means “future” in Japanese, the mid-size sedan will go on sale in the U.S. next year and feature a range of approximately 300 miles.

The name Mirai is especially apt when you consider the hydrogen powertrain takes just five minutes to fill, emits no exhaust besides water vapor, and can even siphon energy into an owner’s home with the Optional Power Take-Off device.

As far as driving experience goes, the Mirai shouldn’t differ drastically from a normal electric vehicle. The sedan is a tad on the portly side at 4078 pounds, but its maximum output of 153 horsepower allows it to accelerate from 0 to 60 mph in around 9 seconds.

Furthermore, because the hydrogen components are mounted close to the ground, the FCV has a low center of gravity, which lends itself to spry handling.

As with most forms of alternative energy, creating a sustainable infrastructure to support the car will be one of the biggest challenges. To overcome that hurdle, Toyota has announced a joint venture with industrial gas supplier Air Liquide to build 12 hydrogen fueling stations in New York, New Jersey, Massachusetts, Connecticut, and Rhode Island. There are currently 10 stations in California, but the state has committed to 20 by 2015 and 40 by 2016. (digitaltrends.com)

The Mirai already mirrors the Prius in one obvious respect: its frumpalicious styling. A near-clone of last year’s FCV concept that previewed the production model, the Mirai has nearly the same footprint as the Camry hybrid but is 2.5 inches taller. Carried into production, unfortunately, are the FCV’s gaping triangular outboard air intakes (fuel cells need a lot of cooling, apparently), which contain foot-tall vertical LED running lamps and have turn signals on their outer edges. Perched about the bumper are scowling LED headlamps and an odd “floating” hood. The body features flowing fenders and Dodge Intrepid–like blackout windows, terminating in a rear end that can best be summed up as “WTF?”, with a band of LED taillamps crossing the trunk as well as messy triangular forms containing the ancillary lighting.

The Mirai can hold a maximum of 5.0 kilograms of compressed hydrogen in two 10,000-psi carbon-fiber-reinforced high-pressure tanks, one located under the rear seats and one behind them. Range is somewhere in the neighborhood of 300 miles, Toyota says, which is more than enough to get from downtown Los Angeles to San Diego and back with fuel to spare. Refueling at properly outfitted stations should take about five minutes.

The Mirai goes on sale in Japan by the end of the year but doesn’t cross the Pacific until the fourth quarter of 2015. Sales initially will be limited to California, primarily because that’s where the fledgling infrastructure is most mature and also to keep the cars close enough to Toyota’s corporate headquarters so that the company can support both the vehicles and the select dealers peddling them during the inevitable teething phase.

Initial pricing has been set at $58,325; some $13,000 in federal and California state incentives will drop the price down to about $45K. Toyota says that about 90 percent of Mirai customers, however, are expected to choose the $499-per-month lease with $3649 due at signing. The deal includes a 24-hour concierge service (with calls answered by a real-live fuel-cell expert), roadside assistance, three years of vehicle maintenance, eight years or 100,000 miles of warranty coverage for fuel-cell components, and, best of all, complimentary fuel for “up to” the first three years.

Besides the matter of infrastructure support, many questions remain unanswered regarding the maintenance and replacement costs for the fuel-cell powertrain and its supporting hardware, how much hydrogen will cost when prices are finally established, and more. For all this, Toyota expects it should be able to entice about 200 early adopters in the first year, ramping up to roughly 3000 total on the roads by the end of 2017. (caranddriver.com)