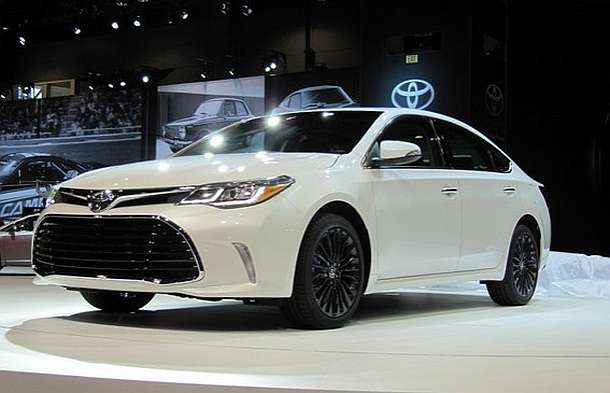 The new 2016 Toyota Avalon coming with small changes and improvements. Back in the 2013 model year, Toyota gave a full redesign to the Avalon, giving it a smoother, hotter, and a more luxurious appearance. The Avalon’s sculpted and swanky styling, luxuriously modern interior, and surprising agility give even pricier rivals a run for their money. A 268-hp 3.5-liter V-6 and six-speed automatic are smooth and responsive. An efficient hybrid version is also offered, pairing a 2.5-liter four-cylinder with an electric motor and sending 200 hp through a CVT. For long-distance cruising in style and comfort, the Avalon is hard to beat—and its dashing looks will charm more than just the AARP set.

Alongside these refreshments, Toyota also redesigned the Avalon’s body and made it slightly wider and shorter, and with that came the better attitude, as well as the improved passenger room and comfort. Even though the Avalon was still fresh and the third best-selling full-size sedan in the 2014, at this years Chicago Auto Show, Toyota presented an improved version for the 2016 model year.  On the rear, the LED taillights have been “refined.” Also added is a chrome accent on the rear bumper.

In addition to the updated fascia, the Touring trim also features a set of 18-inch, dark-grey-painted wheels, LED headlights and LED daytime running lights to accentuate is sporty nature. On the XLE and XLE Plus trims, Toyota revised the standard 17-inch wheels and added a new tire pressure monitoring system.

For the 2016 model year, the Avalon features revisions to its front and rear fascias. Starting up front, Toyota’s big sedan carries a redesigned lower grille that is wider and lower than the 2015 model, a narrower upper grille, and redesigned turn signals. Essentially, it almost looks as if Toyota took the 2015 model’s grille, flipped it upside down and stretched it, whereas the upper grille looks squashed.

Toyota hasn’t shared information about the 2016 Avalon’s engine, so we are guessing that it will carry on with the same power unit as the 2015 model, the 3.5 l V-6 that is capable of pumping out 268 hp and 248 pound-feet of torque. Sure, it’s not a racing engine, but having in mind that this car comes as a sedan model, the engine is more than adequate. The previous model came equipped with a 6-speed, paddle-shift transmission, and our guess is that we will find the same one fitted with the new model as well.

As far as the fuel economy is concerned, this transmission and Toyota’s 3.5 l engine, are rated at 21 mpg in city driving and 31 mpg in highway driving. When talking about the suspension, we have to mention that Toyota has separated the XLE-through-Limited trims from the Touring trim, and given the previous model a more comfortable ride and the latter a more sport adjusted suspension

The 2016 Toyota Avalon comes with improvements on its front and back fascias. As far as the front fascia is concerned, the big sedan now comes equipped with a redesigned lower grille that is wider and lower than on the previous model, a narrower upper grille, as well as the redesigned turn signals. Basically, it almost looks as if the engineers took the 2015 model’s grille, turned it upside down and stretched it a bit, while the upper grille looks thinner than before. In the back, the LED backlights have been redesigned and a chrome accent is added to the back bumper.

Alongside with the redesigned fascia, the Touring trim also comes with a set of 18-inch, dark-gray wheels, LED headlights and LED daytime running lights to highlight the sporty nature of this sedan. With the XLE and XLE Plus trims, the makers have redesigned the standard 17-inch wheels and fitted a new tire pressure monitoring system. All in all, even though the changes are very mild, the new face of the 2016 Avalon comes with a little sportier expression than the previous model.

As far as the inside goes, the new Avalon continues with the story of the previous model’s almost at the top of its class features, meaning that Toyota didn’t mess around too much with the current interior. Across all trim levels, the new Avalon comes with new light gray interior color with different shade of gray highlight stitching. For the XLE and XLE Plus trim levels, 7-inch Entune Audio Plus screen and premium timber accents, now come as standard.

The expected price of the 2016 Toyota Avalon base model should be around $33000 and more, depending on the selected trim and optional equipment. The new model should be available for buying this September.