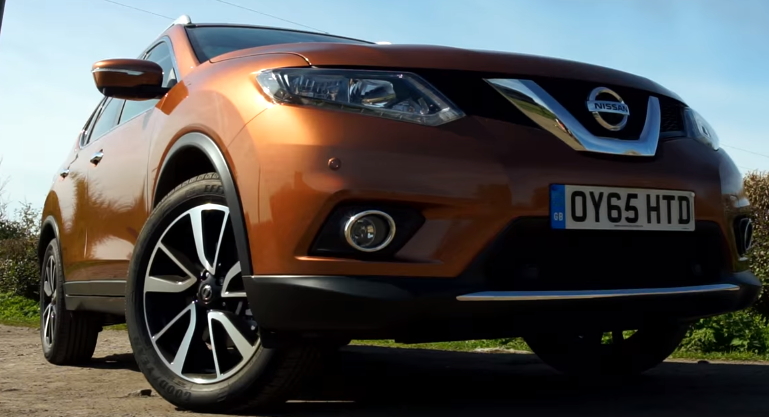 2016 Nissan X-Trail Review, It used to be that a Nissan Qashqai with seven seats was called the Qashqai +2. But after Nissan pulled that seven seater, they needed something to step into its place – enter the Nissan X-Trail. Now, although the X-Trail does have five seats as standard, its option to carry two more passengers means it goes up against the likes of the Kia Sorento and Hyundai Santa Fe. But the big news for the X-Trail recently is the addition of a new 1.6-litre DIG-T petrol, which joins the 1.6-litre diesel in the range.

So let’s start by trying out the new petrol shall we. Well, it has plenty of power and a nippy sprint time – on paper. You see, this 1.6-litre DIG-T has been taken from the current Qashqai model, and although it has 161bhp and gets from zero to 62mph in just 9.7 seconds – it really doesn’t feel that powerful or fast, instead it feels like it was designed for a much smaller car.

The bulk of its power comes in at around 3,000rpm, although by the time you have bounced the revs up to 3,000, the engine feels like its struggling and sounds strained. This petrol also claims an average of 44mpg, which isn’t totally inconceivable, but we’ve been getting just under 40mpg. CO2 wise, you’re looking at 149g/km for this 2WD model – and in fact this petrol only comes in 2WD with a six-speed manual, whereas the diesel’s available in both 2WD and 4WD, plus the option of an automatic. The manual gearbox is a bit uninspiring as well. Sure it does the job, but it just feels a bit flimsy.

Ride wise, the X-Trail is very comfortable and has a sensible, family car feel to it. It’s actually well-insulated from outside noise. The steering is a little light for my liking, but for the sheer size of it, it’s actually surprisingly composed and it doesn’t roll as much in the corners as much as you’d think.

The X-Trail’s interior is functional, but would feel more upmarket if there were less scratchy plastics. And that might be the decider for some. But if you are after plenty of kit and gadgets, then the X-Trail will happily oblige, especially when it comes to safety. Standard kit on every model includes cruise control, Bluetooth, LED daytime running lights, a 5-inch colour touchscreen and Hill start assist.

Go for something like this N-TEC model and you’ll still get cloth upholstery, although I like this better than the leather they offer, but you’ll also get luxury features like a panoramic roof. Safety wise there’s lane departure warning, parking sensors, traffic signal recognition and a very useful 360 degree around view monitor.

My favourite bit about the sitting in the back is the ‘theatre style’ rear seats, which sit slightly higher than the front seats, giving rear passengers a view of the road ahead. And this comes accompanied with tons of leg room, although head room is surprisingly limited, especially with this panoramic roof. These seats also recline and slide back and forth for added flexibility.

Now, for an extra £900 you can install two more seats, which are aimed at accommodating children. Thankfully though, because you can slide the second row of seats forwards, you should be able to come up with a winning combination when it comes to leg room. With the extra two seats in place though, boot space is extremely small, but these do fold flat to give you 550 litres of space – much more usable. You also get these handy adjustable shelves.

And if you plan on making the most of the X-Trail’s mammoth size, the second row of seats fold nice and flat and give you just under 2,000 litres. But these seats do require a lot of strength to fold back up. This 1.6-litre petrol is actually the entry-level model to the X-Trail range, carrying a price tag of just under £22,000. That is considerably less than the entry-level Kia Sorento and Hyundai Santa Fe models which start from around £30,000.

Okay, the Sorento and the Santa Fe are more rounded models, but for the price, you get a lot of car in the X-Trail. It’s practical, it has lots of kit and it offers that much sought after raised-up, road-domineering SUV ride. The 1.6-litre petrol is a little uninspiring, but for those purely sticking to town driving and short journeys, it may just be what you’re after. But what do you think of the Nissan X-Trail? Let us know in the comments section.