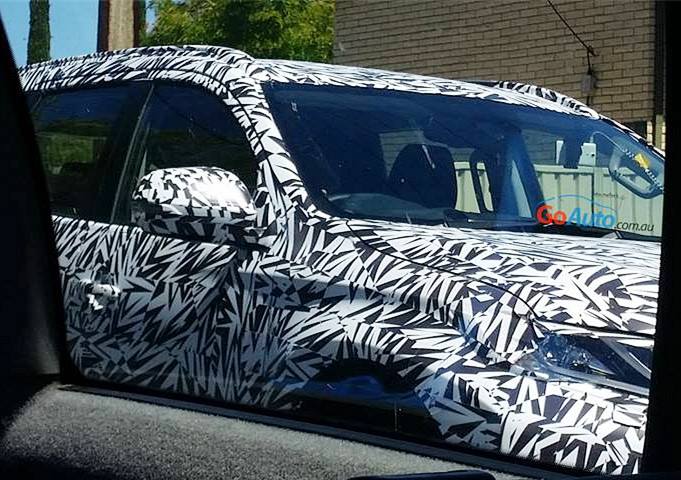 The 2016 Mitsubishi Challenger SUV has been caught on the road current course of testing ahead of its potential debut later this year. Spotted by eagle-eyed GoAuto reader James Donovan near the Mitsubishi Motors Australia Limited (MMAL) head office in Tonsley Park, Adelaide, this week, it is believed that this is the first time the next Challenger has been caught testing anywhere in the world.

Their spies have managed to snap the first pictures of the 2016 Mitsubishi Challenger (aka Montero,Nativa,Pajero).

Looking far more modern than its predecessor, the redesigned model adopts a prominent grille which is flanked swept back headlights. The model also features muscular wheel arches, an upward sweeping shoulder line and a gently sloping roof. We can also see a heavily camouflaged rear end which is more rounded than its predecessor.

The spies couldn’t get close enough to snap interior photos but the model is expected to have an upgraded cabin with higher quality materials and modern amenities.

The current Pajero Sport is powered by a 2.5-litre four-cylinder turbo-diesel from the outgoing Triton pickup, producing 176 bhp at 4,000 rpm and 400 Nm of peak torque at 2,500 rpm. The next model could feature the new 2.4-litre MIVEC turbo-diesel engine which, under the hood of the new Triton, produces 181 PS and 430 Nm of torque. Mitsubishi certainly should retain both 6-speed manual and automatic transmission options for the new Pajero Sport.

Engine options remain unconfirmed but we can expect petrol, diesel and plug-in hybrid variants. The latter will use the same plug-in hybrid system as the Outlander PHEV.

Mitsubishi is currently developing on the third generation of the Mitsubish Pajero Sport, which, going by Thai media reports, will be launched later this year. Now, the first spyshots of the Triton-based SUV has surfaced from Australia, where it is branded as the Mitsubishi Challenger, courtesy of GoAuto.

Mitsubishi Motors Australia was unable to provide any guidance as to when to expect the new model on sale in Australia, but we’d expect it should show up late this year or early in 2016.