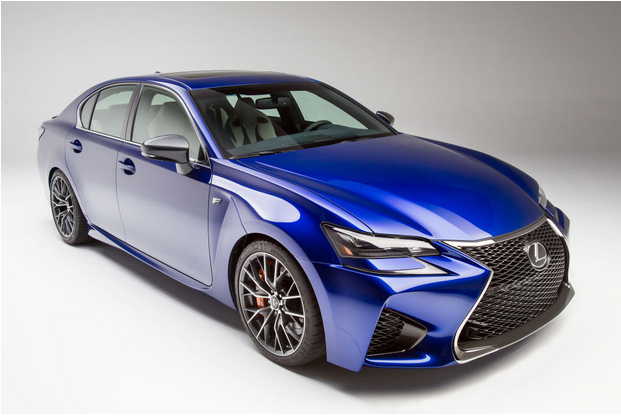 This is what Lexus has come up with to compete with the BMW M5, Mercedes-Benz E63 AMG, Jaguar XFR-S and Cadillac’s new CTS-V: the new GS F.

However, Lexus’ decision to give the high-performance version of the GS saloon the same naturally-aspirated 5.0-liter V8 as the RC F makes you wonder if they actually mean business, as the Japanese model is seriously underpowered compared to its chief rivals.

Acceleration figures have yet to be announced.

The 2016 LEXUS GS-F V8 is hooked up to an eight-speed automatic gearbox with manual-shifting capabilities driving the rear wheels through the same Torque Vectoring Differential (TVD) found in the RC F,with three operating modes named Standard, Slalom and Track.

It’s a pity that the GS F doesn’t have the oomph under its hood because Lexus did a nice job with the exterior – better than Cadillac, if you ask me, even though some may find the huge chrome grille at the front on the excessive side.

It has a mildly aggressive kit with reworked bumpers on both ends, a rear diffuser with quad exhausts, flared wheel arches, side skirts, a carbon fiber boot lid spoiler, plus 19-inch rims shod in 255/35 front and 275/35 rear tires.

We are thinking that this car is more like a legit CTS V-sport / Audi S6 competitor, rather than a CTS-V / M5 / RS7 etc. brawler. If Lexus prices this car around $70k, it could shake up that 2nd-tier of midsize sport sedans. It’s also the only one in that category with a N/A engine, and the 2nd lightest (next to the V-sport). Again, if they price it right, they could have a winner.

However, we were still hoping that Lexus would come out of the gates swinging with a 600 HP car that could compete right away with BMW and AMG. Here’s to hoping this is just a baby step towards higher power performance offerings from Lexus’ F-division.