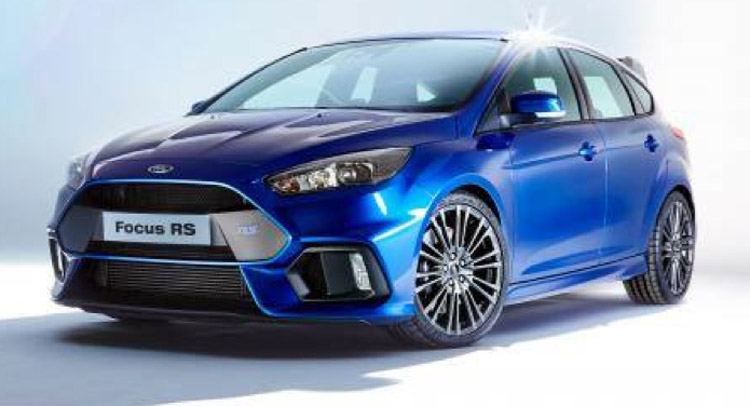 With shorter-throw shifter that allow rapid and precise gear changes, corresponding to the six-speed manual gearbox the athletic disposition of the new Ford Focus RS. Both the transmission itself and the clutch were stronger dimensioned to withstand safely the higher stress due to the powerful engine.

By comparison, the VW Golf R sprints with 300 hp and 380 Nm in combination with the dual-clutch transmission in just 4.9 seconds from 0 to 100 km / h (manual transmission 5.1 seconds). During the VW Golf R deregulates its propulsion at 250 km / h electronically, Ford can run its compact sports car without limit. The last Ford Focus RS 305 hp and had finished his first driving at 263 km / h, the Focus RS500 with only 350 hp at 265 km / h. Compared to its predecessor, the new 2016 Ford Focus RS will also convince with significantly lowered fuel consumption and exhaust emissions.

The essential features of the 2016 Ford Focus RS  is one of the all-wheel drive, which is characterized by the dynamic torque distribution “Dynamic Torque Vectoring”. The result enables a particularly sporty handling and offers huge fun – all this combined with outstanding traction advantages and road holding that combines maximum agility with tremendous cornering speeds.

The new “Ford Performance” -Allradsystem based on two electronically controlled differentials on the rear axle. Its special feature: they not only regulate the power distribution between the front and rear, but also manage the torque balance between the two rear wheels – this “torque vectoring” affects the handling and cornering performance of the new 2016 Ford Focus RS exceptionally positive. A maximum of 70 percent of the drive power to flow to the rear axle and completely passed there, in the extreme case to a single wheel.

To perfectly match the power distribution between the front and rear, left and right respectively the current driving situation, evaluates the high-performance avionics 100 times per second from a wide variety of sensor signals. Thus, the controller can use information about the steering and yaw angle, lateral acceleration and the speed traveled already the outer rear wheel forward more torque when turning into a curve. This counteracts understeer and supports both agility and stability of the new Focus RS.

The result is an exceptional road holding with lateral acceleration of more than 1 g – a figure that usually reach only dedicated race car and was unmatched in the competitive environment of the Focus RS. In addition, a neutral self-steering behavior in extremely high handling limit, which will allow a well-controlled drifting – for dedicated drivers the ultimate driving pleasure.

Its full potential, developed the “Performance”  Ford also thanks to the close interaction with the highly advanced assistance systems of the basic model. These include in particular the electronic safety and stability program ESC and the vehicle dynamics control “Torque Vectoring Control”, based on the braking system.

At the same time, the new 2016 Ford Focus RS gets a further revised sports suspension, which is characterized in comparison to the ST model with stiffer spring rates, increased articulation points and bearings as well as larger sized stabilizers. The electronically adjustable shock absorbers have a special Vote for use on closed course. The electric power steering to provide even demanding drivers a particularly precise response with balanced steering forces.