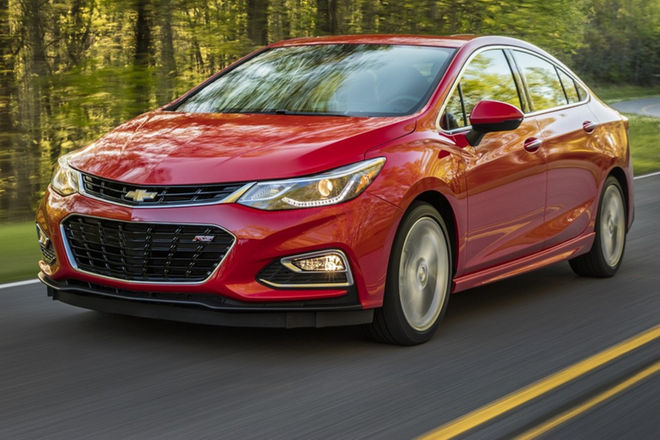 Last year Chevy cut 200 pounds from the Camaro, managed to get 28 percent stiffer, gave it a fresh lightweight turbo four-cylinder base engine, improved the coping with bunch, gave it a menacing face, and voilà: Car with the Year! The script read at our first-drive event to recap the intro on the new 2016 Cruze included too much these same plot elements: Weight is down by up to 250 pounds. The body shell is chock-full of press-hardened steels and clever CAD trickery making it 27 percent stiffer. A new direct-injected, turbocharged, 1.4-liter four-cylinder with auto stop-start willpower all Cruzes (until next year’s return of your diesel option). The chassis gets upgrades for instance internal rebound springs within the struts and hydraulic bushings along with an optional Watts linkage at the spine. And the Cruze turns into a fashion makeover which includes today’s de rigueur coupelike roofline and Chevy’s sleeker twin-grille facade.

That question could only be answered through the entire Motor Trend brain trust within the crucible of an weeklong battery of testing in California’s high desert, except for a first taste Chevy invited a few us to consider a couple laps with the ride evaluation track at its Milford Proving Ground in rural Michigan in all of four trim variants. The company even provided mainstream versions of your Focus, a Corolla, an Elantra, along with a Civic to compare and contrast.

The new engine, rated at 153 horsepower and 177 lb-ft, sounds and feels an excellent bit stronger compared to two gas engines it replaces, and Chevy estimates it’ll scoot to 60 mph in 7.7 seconds. If true (and manufacturer estimates historically trend conservative), that might put it only a tick ahead from the new benchmark Civic 2.0-liter manual plus a half-second slower compared to a 174-horse, 1.5-liter turbo Civic Touring that has a CVT. Ford’s 2.0-liter Focus sedan is often a tick quicker, along with the midlevel 1.8L turbo Jetta gets there in 7.3 seconds. Don’t expect next year’s 1.6-liter oil-burner from GM’s new Medium Diesel family for being any quicker. (In Opel trim commemorate 134 hp and 236 lb-ft.)

Acceleration is a useful one and smooth with all the six-speed automatic, but our single biggest gripe together with the new Cruze is while using manual transmission’s shifter. The top from the knob is greater than average and borderline clunky, the requirement to pull up with a little button within the shifter to acquire reverse feels antique, the shift throws are slightly long, and also the shift action feels far too light. It seems as though its engineers didn’t expect many takers, that can of course likely to end up the case, and as such didn’t sweat the facts. The only other major gripe was with all the brake pedal positioning, which feels far too high across the accelerator.

My first ride was at an LT having an automatic—the expected big-volume seller—riding on 205/55R16 Goodyear Assurance tires (the particular I sampled, since there were no L or LS models present with 15-inch tires). Man, was this car quiet—far much more than any on the competitors or any from the bigger-tired Cruzes, even. The ride compliance was impressive, due to the reasonable lateral grip these tires developed without having tendency to drift wide in washboard curves. The ride and handling impressions were identical over a manual Cruze RS that wore Hankook Kinergy GTs within the same size.

For comparison, I drove a 2.0-liter Focus SE on 215/55R16 ContiProContacts. The all-black interior looked far shinier and cheaper, plus it was louder and much less refined inside, nonetheless its chassis felt such as an equal match with regard to ride and handling, which has a bit more road feel coming from the helm. I also sampled the Toyota Corolla LE on Michelin Primacy MXV4s inside same tire size as being the Cruze LT. This interior seemed antique, as well as the weaker engine was obviously a real moaner when pressed. The body structure also seemed less robust, and there would have been a lot more head-toss. (Credit the Cruze’s rebound springs, which offer secondary roll control which allows the anti-roll bar for being less stiff.)

My alternative up the Cruze’s performance ladder is at a Premier variant together with the improved rear bushings and Watts linkage wearing 225/45R17 Firestone Firehawk GT rubber. Abetting the improved lateral grip generated with the tires using the extra lateral stiffness with the Watts link endows this version with greater cornering precision and authority that exacts just a minor penalty when it comes to ride quality or road noise through the fat lower-profile tires. A slightly quicker steering ratio (16.0:1 versus 17.2:1) suits greater responsive chassis well.

The point with the Cruze’s performance pyramid will be the Premier RS. That $995 premium for that RS buys the identical gloss-black grille, decklid spoiler, more aggressive front and back fascias, and side rocker sills that $695 one gets yourself on lesser Cruzes, but within the Premier in addition, it buys fancy Michelin Primacy MXM4 tires in dimensions 225/40R18 on unique rims. This one cornered by far the most aggressively, but we’ll must quantify any improvement in grip for a track, and I’ll be gobsmacked should the numbers reveal a noticable difference that my ears would deem worthy in the unholy din these meats generate on all kinds of pavement. Take a long try before signing up because of this punishment.

My final competitive drive was from the Civic EX on 215/55R16 Firestone FT140s. The Civic, chances are you\’ll recall, would be a finalist inside our most recent Car on the Year contest. Flat foot this 158-hp, 138-lb-ft, 2.0-liter CVT powertrain, and it also sounds and seems like it’s accelerating quicker (certainly louder) versus the Cruzes. Its suspension also felt a tad newer, the way it never bottomed or topped out about the entire course, even traversing a major dip.

There’s only a whole lot you can tell of a car from eight laps of any 3.5-mile course, but a claim is building to declare the Cruze being the Camaro from the compact class. We’ll need a little more time to decide whether it’s the Civic with the class.