2016 Chevrolet Camaro Best Rendered Yet – Chevy’s prototypes suggest that the 6th generation Camaro will have a sleeker body, while the shift to General Motor’s lighter, scalable Alpha platform that underpins the Cadillac ATS sedan and coupe, should do its part to bring down the curb weight.

More specifically, the 2016 model year Chevrolet Camaro borrows some exterior styling cues from a wacky Autobot we refer to as Bumblebee, the one from the fourth movie in the Transformers saga.

These images come to us from render expert chazcron, who had some of the better renders of the car that became the 2015 Ford Mustang last year. He based these images on the spy photos of the camo mule that’s been running around lately, and they showed up on the Camaro6 forum.

There’s not much we can add to the second question without direct input from GM, but in regards to the first part, perhaps these new renders from artist Chazcron on the Camaro6 forum can partially and temporarily satisfy your natural design curiosity.

“I decided I can glean enough information from existing camo shots to craft a rough 3D model. Keep in mind that I am using my own interpretation of the camo shots,” said Chazcron in a posting.

While we do know that the next Camaro Coupe will enter production in late 2015 as a 2016MY, the date and place of its public debut remain a mystery.

The 2016 Chevrolet Camaro is believed to ride on a modified version of the Alpha platform, which is also used on the Cadillac ATS, but the suspension system should be significantly upgraded, which means better handling. The engine lineup is expected to include the 2-liter four-cylinder turbocharged from the BMW 3-Series fighter, which will be good for 272 HP and 400 Nm of torque. This will go against the Ford Mustang EcoBoost, with its 310 HP and 433 Nm 2.3 liter four-cylinder. Don’t expect a rival for the Dodge Challenger SRT Hellcat. 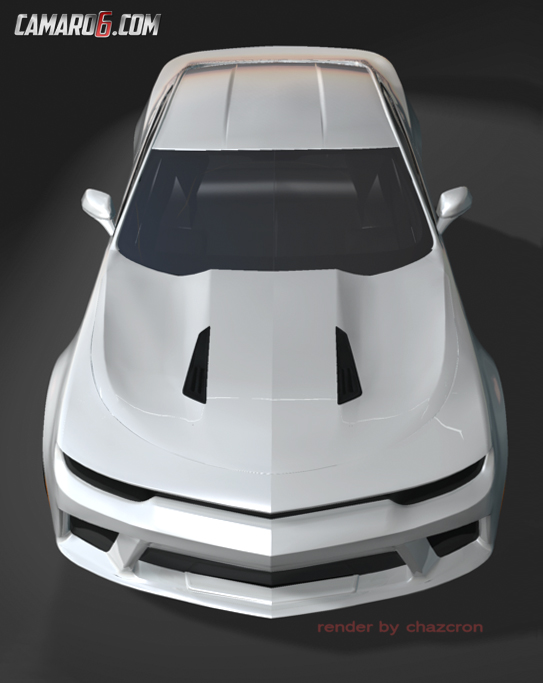