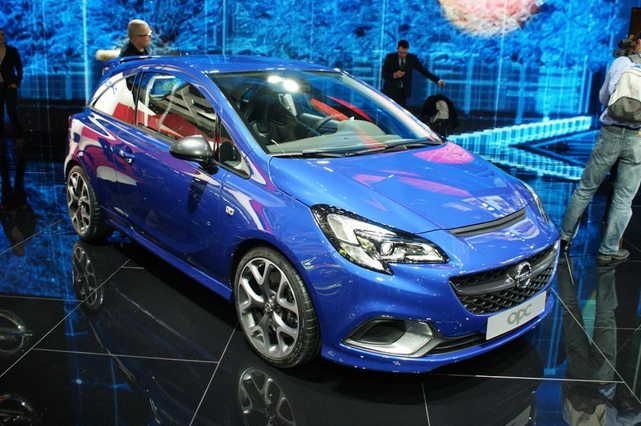 After passing the fifth generation in 2014, the 2015 Opel Corsa OPC landed at the Geneva Motor Show 2015 version of OPC sport, a fireball dynamics mouth and petrol engine turbo 1.6-liter boosted to 207 horsepower.

Opel hit a nice shot on the market of the European urban women. For the Geneva Motor Show in 2015 , the German manufacturer has decided to move up a gear by bringing in his luggage the sports version of the draft, the 2015 Opel Corsa OPC, and it is clear that the machine has some advantages on the pedal to please the general public.

Aesthetically, this latest version signed Opel was not surprising but really nice at first glance. Facies wants to be more muscular with a hood outlet, a grid of honeycomb-shaped grille and underbody affirmed. 16-inch wheels are also present and rear puffs out his chest with a small roof spoiler and integrated dual exhaust outlet to the diffuser. Inside, the conclusion is the same with Recaro seats, a leather steering wheel with flat, sports pedals and shifter badged OPC which act as novelties.

Under the hood, however, it is time to change, at least in part. The 1.6-liter turbocharged four-cylinder petrol engine is still there but blows harder with a power climbing from 192 to 207 hp and a maximum torque of 245 Nm, which surpasses the paper’s French rival Renault Clio RS and Peugeot 208 GTi spitting 200 nags. The duel also continues at the gearbox, and six-speed manual for German while traffic have a dual clutch transmission.

The match between France and Germany is running, especially as this will land in our city supercharged concessions from next spring and is already open to the command with a starting price of 23,800 euros .