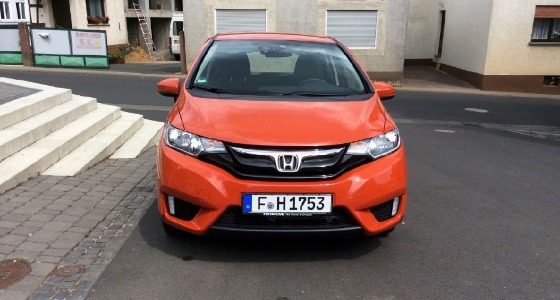 the Jazz is a real success for Honda. More than 5.5 million copies sold worldwide since 2001, including 3.5 for the second generation launched in 2008. Enough to make a reference to Honda! Especially for this new version, this Japanese manudafacture have been careful to improve the recipe for a city vehicle.  This is 2015 Honda Jazz review.

On average, consumers of new Honda Jazz is 61 years old. This is why the Jazz do not amazes the gallery by its engine. A 3-cylinder 1.3 i-VTEC petrol given to 102 horsepower (@ 6,000 r / min) it is in combination with a manual 6-speed gearbox or the new CVT automatic transmission more efficient, certainly, but at the expense of driving sensations. Kill the suspense, Honda engineers have thought you never would leave the city with your jazz!

With my pair of  WheelsAndDriver we tried different versions of this new Jazz. BVM6 or CVT. Elegance and exclusive finish. White Orchid, Attract Sunset Yellow and Orange. All on a circuit of about 40 km prepared by Honda. The problem was to begin this essay by the motorway section (limited to 120 km / h) with the CVT. Not really aware of what to expect, we are surprised of the lack of dynamism of the city. The poor quality coating does not help to appeasement. Not good for highway, road unconvincing, Jazz takes his ease in town. Its steering facilities in the small streets surprised (positively) while maintaining all horizontally thanks to its strengthened and expanded anti-roll bar. Convincing.

During the afternoon, we go off track to meet the Castle Ronneburg who taunted us from the top of its hill. Surprisingly (really), the Jazz did not appear to suffer during the climb. But as we take a few pictures, the castle keeper tumbles driving his Toyota hillux inviting us from screaming “Kein drone! Kein drone! “… It’s hard to explain in a German school just forgot that we wanted to take photos of the car and not fly over the castle with anything.

According to the principle “Man vs Machine Minimum Maximum” Honda is cleverly managed to focus the passenger. 2.53 meters wheelbase ( 3 cm compared to the previous generation) for a car of 3.99 meters. With 354 liters, the boot boxing in the higher category (with Golf for example) while in folding bench gives 1314 liters. The passenger seat is also foldable, and can accommodate a surfboard, yes there are surfers retirees. It was at least the example given in the Akademia … Another fun feature, the ability to fold the front seats almost flat on the back seat. What consider a nap or any other horizontal activity. After-all, it was a business case for the first generation Twingo …

With Honda Connect multimedia system standard from the second trim level, but also the ISOFIX anchorages with the famous “magic seats” or the steering wheel controls, the Honda Jazz is a comfortable small car to use exclusive city. Side tariff, the level Elegance begin his career this fall from € 16,100. Not representing much on the European market, the hybrid version will not be offered. Honda would rather wait for a more mature market. This is an understandable arbitration.