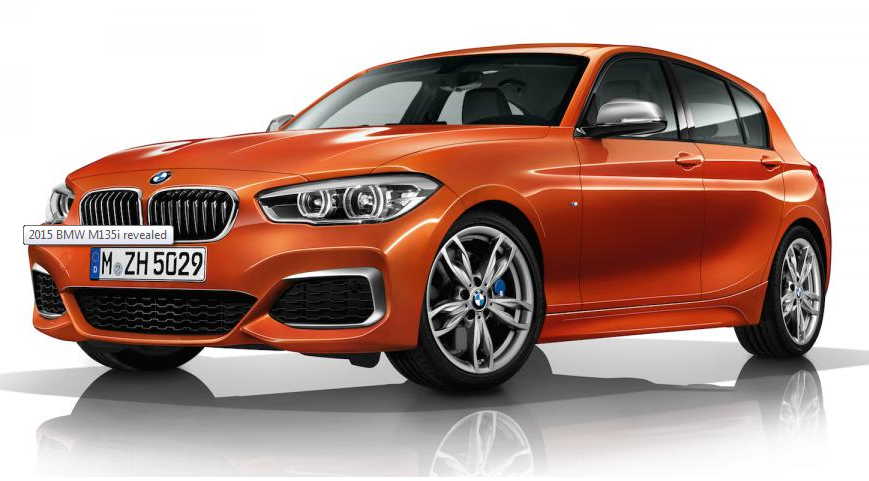 Images of the 2015 BMW M135i have been released, revealing the updated styling of the Bavarian brand’s flagship hot-hatch.

BMW announced the specifications of its upgraded 1 Series range earlier this month but has kept images of 2015 BMW M135i under wraps until now.

As with the rest of the 2015 BMW 1 Series range, the 2015 BMW M135i trades the old car’s droopy headlights for thinner, squarer lamps, a new flatter grille with chrome slats, a revised front bumper with brushed metal side intake surrounds, new L-shaped LED tail-lights that span the rear quarter panels and reshaped tailgate, and a tweaked diffuser with new reflector strips.

The subtle power bump has no effect on the hot-hatch’s 0-100km/h acceleration ability, with the six-speed manual model rated at 5.1 seconds and the eight-speed automatic two tenths sharper at 4.9sec.

All 2015 BMW 1 Series variants come with an embedded SIM card for the standard Emergency Call and BMW TeleServices functions, and the optional internet-based BMW ConnectedDrive services such as BMW Online internet portal, Concierge and Remote Services, and real-time traffic information.

Other technological additions include Active Cruise Control with Stop & Go, which adds automatic distance control and allows drivers to resume cruising after being stopped in traffic at the press of a button, and an upgraded version of the semi-automatic Parking Assistant that can now perform rear-to-kerb parks as well as reverse-parallel parks.

Full Australian specifications and prices will be revealed closer to the local launch of the 2015 BMW 1 Series, which is scheduled for July. Expect the 2015 BMW M135i to be priced close to outgoing model, which starts from $64,930 plus on-road costs.