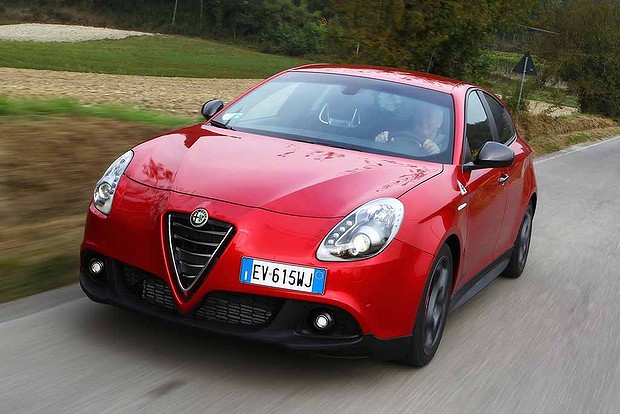 The 2015 Alfa Romeo Giulietta QV now available in Australian showrooms with a host of new features and the first-time option of an automatic transmission.

The updated Giulietta Quadrifoglio Verde six-speed manual is priced at $39,000 before on-road costs, $150 less than before, while the six-speed dual-clutch (TCT) automatic version costs $3000 more at $42,000.

The 2015 Alfa Romeo Giulietta QV is now auto-only in Europe. Alfa Romeo Australia is able to offer the manual gearbox because it is matched to a pre-facelift iteration of the 1750cc engine, not the updated version lifted from the 4C that features with the TCT.

While powering up through the gears out of an autostrada toll booth just outside Turin it is difficult not to reflect: is this latest version of the Giulietta QV hot hatch the car that will help Alfa Romeoregain its mojo?

It’s no secret Alfa, as a manufacturer of sporting passenger cars, has lost its way more than a little over recent years. Apart from the specialty 4C sports car it has just the Fiat-based front wheel drive Mito and Giulietta on offer – neither of which are totally satisfying as drivers’ cars.

“I won’t take issue with the fact that Alfa has got, quote-unquote, a tarnished reputation and it also has a limited number of models on the market place,” said none other than Fiat, Chrysler and Alfa Romeo boss Sergio Marchionne in response to questions at last week’s Paris motor show.

But in line with Alfa’s latest business plan introduced this year, Marchionne also warned that come the middle of next year when the company unveils a car likely to be the Giulia rear-driven sedan, that will be the time to judge Alfa on its merits.

“The more fundamental question, which I think is the one that we have been working at very, very diligently over the past two and a half years is the product itself; product and powertrain,” he said

In the here and now, this special edition of the Giulietta Quadrifoglio Verde has been produced to commemorate 60 years since the first Alfa bearing the Giulietta name was produced.

Due to arrive in Australia in January next year, it headlines a gently refreshed range of Alfa’s mid-sized hatchback, with changes to the mainstream models concentrating mainly on interior presentation and equipment, plus a commensurate increase in the current entry price of about $27,000.

The QV version will also be more expensive than the current $39,000-odd for the performance Giulietta but comes with a host of significant upgrades. Not least is that the previous manual-only transmission option is now replaced by a six-speed twin-clutch automated gearbox as standard equipment.

It’s mated to the latest version of Alfa’s 1.7-litre turbocharged engine, taken along with the gearbox directly from the 4C.

Featuring new intake and exhaust systems – both responsible for a fruitier engine note – the engine’s power output has been lifted by three kilowatts to 177kW at a slightly higher 5750rpm.

Torque (or pulling power) is 300Nm at 1800rpm with the dashboard mounted “DNA” button switched to normal mode, or a more useful 350Nm at 2000rpm in dynamic mode.

Alfa says the changes result in a 0-100km/h acceleration time of 6.0 seconds using the newly added launch control afforded by the automated transmission. That’s a useful 1.2 second reduction over its manual predecessor.

While the QV’s exterior gets 18-inch alloys, glossy black trim items, a larger exhaust and red-painted brake calipers, it’s the interior that’s in for the biggest upgrade thanks to a new steering wheel and the Fiat-Chrysler group’s latest infotainment unit featuring a 6.5-inch touchscreen for sat nav and other functions, plus USB, Bluetooth and auxiliary inputs on the centre console.

For those prepared to pay extra, 50 examples of a “launch edition” QV will make it to Australia featuring matt-grey paintwork, carbon finish for the spoilers and mirror housings, added side skirts and specific alloy wheels. No pricing has been announced.

Those expecting the kind of raw and raucous engine noise similar to the 4C may be disappointed by the QV’s deep but somewhat muted engine note but on the whole it’s not a bad thing; on the highway, this hatchback is quiet, the engine is very smooth throughout the rev range and it makes a subtle and comfortable grand tourer.

In so-called normal mode the gearbox is a little slow to react, with a slight pause in upchanges, but that’s fixed by selecting dynamic, which quickens the shifts and then more so if taken from automatic to manual gearshift mode.

Steering weight and feedback also seem better than earlier QVs so there’s a better sense of connectedness between car and driver. The ride is generally quite good, not harsh or bumpy like a stiffly sprung sporty, but with an agreeable amount of comfort and suppleness dialled in.

That softness may be at the expense of ultimate handling ability however, because on tight and bumpy roads the rear suspension squirms during directional changes or heavy braking, sometimes pitching weight onto the front tyres which don’t always cope with the extra loads and lose grip.

In short, the Giulietta QV is fast and comfortable up to a certain point, but when asked to push harder on demanding roads doesn’t have the sort of suspension composure to deliver ultimate driving satisfaction.

There are few complaints about the revised interior however, apart from a lack of centre console storage, and a speedo poorly marked to identify crucial speed limits (and no digital speed readout on the information display).

The full-colour touchscreen looks well integrated and is easy to use, the shapely seats feel as good as they look, cabin quality seems to match the best of German rivals and the ambience within has more than enough Latin flair to overcome mere efficiency.

One Alfa spokesman noted that choosing a Giulietta over, say, a VW Golf was not a purely rational decision, meaning there’s an emotional appeal as well. It’s something the brand has promised for many years without always the engineering basic to back that up.

The latest Giulietta QV may not be perfect but it’s better, and a handy pointer that Alfa Romeo’s intended future may be a whole lot more interesting than its present.

By Cheryl Chernobyl
In Alfa Romeo