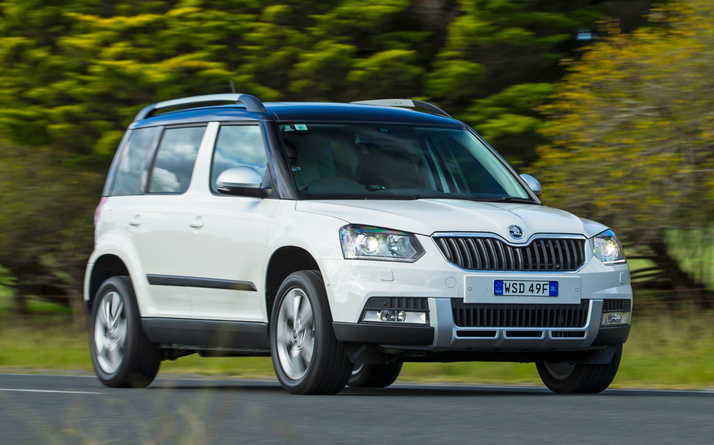 Since its market launch, the SKODA Yeti has touched the hearts of SUV enthusiasts. As well as winning Top Gear’s Family Car of the year award 2009 shortly after its release, the Yeti was named the most satisfying car to own by UK drivers in the annual Auto Express Driver Power customer satisfaction survey 2012 and 2013.

As an unpretentious looking slab of Volkswagen Group metal, it’s the closest thing to a Tonka toy made real. Sitting in that crossover SUV market, it’s a motor vehicle that could be laid off by several on the get go because an additional party by suppliers in promoting a normal car which has a substantial traveling location within the draw “lifestyle vehicle” only a few lavish far more earnings. We’ve put in a week which has a Yeti Out-of-doors discovering the way appropriate that impression is actually.

Take a close look and it’s about as straightforward as designs go. There’s a big square cuboid that houses people and things, with a smaller one nailed to the front to put the engine in. There are so few curves on the thing that even the front windows have corners on them.

There’s still a handful of styling details you can miss at first glance though. For instance, the wheelarches are delightfully bulbous and give off the impression of a bulldog-like stance, with the hips and shoulders puffed out.

This Yeti Outdoor model gains traditional ‘ruggedised’ road car features over the ‘normal’ Yeti, with silver skidplates front and rear. These hide re-profiled bumpers that allow for marginally greater approach angles for climbing slopes. All these offroad-looking addo-ons seem to suit the overall image of the car better than the regular model.

One design feature we don’t get on with though is the roof. With darkened A-, C- and D-pillars connecting the roof to the body, the Yeti almost pulls off that floating roof look but for the body-coloured B-pillars. In contrast to the majority ruler-straight lines of the rest of the car, these colossal slabs of metalwork curve up incongruously from the car’s sides to meet the roof. The overall effect is of a precariously perched roofline, or a novelty clothes peg. Still, order the car in a dark colour – or even black itself – and this will melt away too.

The lack of grandeur follows the Yeti to the inside. It’s traditional Skoda fare, which means a simple layout of sensibly-positioned controls, screwed together brilliantly and, while not necessarily up with the Audis of this world, made of materials that won’t irk or disappoint. The touchscreen – absent on base “S” models – gives a splash of modernity to what is otherwise a fairly restrained interior.

Our test car in flagship ‘Laurin & Klement’ specification adds piano-black dash inserts, nicer carpets and mats, brown leather and a smattering of L&K brand logos. It certainly smartens things up and if you’re planning on using your Yeti as a family car it’s worth the extra cash for the nicer environment. That said, the leather is somewhat at odds with the car’s more homely nature – and we’d be perpetually paranoid of getting mud everywhere if it were used off road (or even just from kids’ feet kicking the seats – see below!). Still, it’s a pretty civilised way of crossing a quagmire.

It’s capable of swallowing up a selection of humans of various sizes without any particular complaints and with plenty of glass about (L&K models get the panoramic roof as standard) it’s bright and airy. There’s perhaps not a lot of support to stop you sliding sideways in the seats, but this ought not be a great issue on the road. If you take the Yeti off-road and go across some slopes at a decent angle then you might notice.

Dotted around the cabin are enough cubbies and storage bins that you’ll run out of things to lose in them long before you fill them up. There’s a useful dash-top box (open in base trims, fitted with lids in higher trim levels) for keys, coins and phones.

next ppoint to 2014 Skoda Yeti Outdoor Review. the Yeti Outdoor is not the most dynamic of vehicles, but it puts up a good showing. It’s never disappointingly van-like to hustle and it doesn’t pitch or roll like a jacked up hatchback, but we’d probably stop short of calling it agile. The 4WD of most Outdoor models adds a little more capability to the drive, particularly so in the wet.

The Yeti’s one of the most unflappable cars around though. Very little upsets its calm either on the road or off it and it’ll cope with potholes, traffic calming measures, a farm track or the A43 with equal ease.

The Haldex four-wheel drive system is about as easy-to-use as these things come. Press the big “off road” button on the dash, point it at a climb or descent and even the most ham-fisted of off-road novice motoring writers will make progress. You’ll not be able to adjust ride height though – at 180mm it’s more than the stock Yeti – so it’s one for taking you down rutted tracks and over slippery surfaces more than out and out rock-crawling.

Tested here was the top of the range 2.0-litre TDI, pushing out 168hp and 258lb ft of torque. Mated to the clever Volkswagen twin-clutch DSG automatic gearbox, this is capable of an 8.6-second sprint to 60mph and a combined fuel economy of 44.8mpg.

This particular combination is, it has to be said, alarmingly quick. There’s not a lot of impetus in first gear – as if engine torque is artificially limited – but once that’s out of the way, acceleration is remarkable and utterly linear. With no pauses from the DSG shifts, the Yeti seems to gather speed with alacrity, regardless of the road speed when you first press the pedal. That 122mph top speed seems rather pessimistic, but we lacked a runway long enough to find out.

This is largely the same engine as in the previous-generation Octavia vRS, so it’s not too surprising that it’s a brisk thing – and there’s a certain amount of amusement to be had accelerating hard from traffic lights. When we were able to resist temptation we saw almost exactly the fuel economy that Skoda claims – just as when we tested the Superb Outdoor earlier in the year – so there shouldn’t be any nasty surprises at the pumps, even if the lunatic under the bonnet spurs you on occasionally.

New Yeti and new Yeti Outdoor were both unveiled at this year’s Frankfurt Motor Show and are now available to order. Made for outdoor adventure, but equally at home in the city, the new ŠKODA Yeti will be available in three trim grades – S, SE and Elegance and L&K with prices starting from just £16,715 OTR.

What are its competitors?

There are plenty – RAV4, Hyundai iX35, Mitsubishi ASX, Nissan Dualis, Honda CRV, 2008 Pug and of course the VW Tiguan on which Yeti is based.

By Cheryl Chernobyl
In Skoda