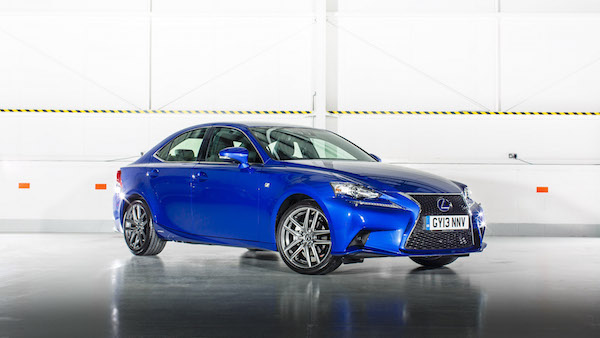 Lexus 300H F Sport Review, The new IS really is all-new on top and mostly new underneath. But Lexus’s ambition does have limits. They know that in Europe more than two-thirds of the 3-Series/A4/C-Class stranglehold is taken up by two-litre diesels. And they’re also charmingly frank that they don’t have the diesel expertise to match the opposition. With CO2 emissions confined to just 99 g / km, with a power of 223 hp, the new Lexus 300h a snook to its competitors, most polluting and more demanding.

The Toyota-Lexus tandem has sold nearly 6 million hybrid vehicles worldwide. An adventure that began in 1997 with the first Prius. But until now, the IS had to settle for conventional mechanical, both gasoline and diesel. This third generation, very successful and the opposite of that proposed German industry, landed on the Old Continent with a 2.5-liter V6 petrol (undistributed home), and especially with a hybrid variant combining a combustion engine 181 hp and 143 hp of power.

The best way to get a place in a hyper competitive market, it is to stand out. And while the D segment is populated by relatively conventional sedans, the new Lexus IS has chosen a style that contrasts completely with the lines of the Audi A4, BMW 3 Series and Mercedes-Benz other Class C. Of course, we love or we do not like, but it has the merit of bringing a little freshness in a rather dreary segment. Suddenly, the IS is recognized far and unlike any other. In particular it is identified with its front very aggressive, very much inspired by the LF-LC concept and dominated by a tapered grille double trapeze. Profile, very fluid, is distinguished by a rocker signed a thin rib which extends upward from the other side of the ark of the rear wheel. A detail, among others, showing oh designers of the Japanese group were attentive to the look of this new sedan.

Compared to the old IS, this third generation is more precise and responsive. A nice improvement that must to improved cash rigidity, better weight distribution as well as reviewed and corrected suspensions. Management for its part has a correct feel and well marked midpoint, which participates in a course held flawless, including high speed. The IS has a particularly remarkable turning circle for a saloon of this size (10.4 m between curbs) while the brake is convincing, coupled with a very natural feel of pedal for a hybrid.

Our test copy which had the F Sport package and therefore exclusive suspension settings and steering offers exceptional balance and agility despite a marked increase. So, as the SI in the form of propulsion, it distills a real driving pleasure, especially when the route is sinuous. And given that the suspensions do an outstanding job, comfort is also present, especially as the cabin is spacious enough and with a upholstery combining comfort and support.

The new IS 300h is called a model “full hybrid” . In short, this means that the gasoline engines and electric are able to operate together or independently. The first is a four-cylinder gasoline installed longitudinally. Featuring the latest generation of direct and indirect injection (D-4S), it promises to be both frugal and efficient. It also has the dual intelligent variable (VVT-i), and a recirculation system of the exhaust gas. The electric motor in turn has an output of 143 hp for a torque of 300 Nm. The two combined generate mechanical power of 223 hp.

Specifically, the electric motor drives the rear wheels via what Lexus calls a “continuously variable transmission with electric” . Powered in this way, the IS 300h goes from 0 to 100 km / h in 8.3 seconds, and from 80 to 120 km / h in 6.2 seconds. The maximum speed is limited to its share to 200 km / h. Performance in the average that allow him to face roads and highways with some gusto. In the city, she moved squarely into a rocket, bounding literally as soon as the light turns green. And in a cathedral silence … Note that the EV mode (100% power) to browse a few miles without using a drop of gasoline, provided they do not exceed 50 km / h, and if the battery is fully charged.

The Lexus IS 300h comes with a very complete equipment. However it is possible to choose from several packs , the F Sport that concerns us here. The radius of the few options include the navigation system and its joystick, Adaptive Variable Suspension, dynamic cruise control or the extraordinary designed by Mark Levinson audio system to the acoustics of the model. It consists of a 12-channel amplifier with a total output of 835 watts, for distribution via 15 speakers.As for safety, the model relies on eight airbags, but also an active bonnet to protect pedestrians in a collision, a collision automatic braking, a Blind Spot, automatic activation of beam or the warning output taxiway.

This third version of the Lexus IS is a success. Luxury fans, high technology or ecology appreciate this subtle cocktail straight from the country of the rising sun. Its hybrid unit, unique, also proves efficient than conventional four-cylinder diesel, fine particles and odors less fun and more. Add to that a very high level of comfort that here, too, distinguishes it from the mainly German competition. In short, try it, love it!