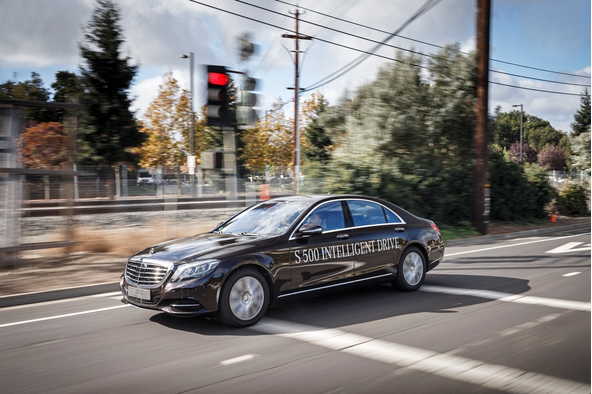 Test drive: Mercedes-Benz S500 Intelligent Drive – I’m sitting in a Mercedes. No. Stop. I let myself go in a Mercedes. That sounds better. So I sit in the back, though, I would have to sit front left. Because the vehicle, of course, an S-class, specifically a S500 Intelligent Drive, runs by itself. Not only in traffic. Not only in the subsequent traffic. No. Alone. On the road. So right with traffic lights, observe oncoming traffic, keep cross traffic under control and identify potential confounders. Here is a short report with my test drive: Mercedes-Benz S500 Intelligent Drive – Autonomous and detached!

Incidentally, I was traveling in Sunnyvale, was there also in the design center of Mercedes-Benz and because I was not allowed to take pictures there, I show you here photos of Mercedes-Benz.

Admittedly, the drive for over a set distance. The ride is almost over specially prepared GPS coordinates but predefined I have the feeling that the automotive industry – in the case of Mercedes-Benz – is already really far. In the test vehicle the trunk is full of computer technology, now – in the developer status – of course, still needs to be easily reachable. In the vehicle itself, there are additional switches, keys, keyboards and monitors. There are in addition to the already existing camera systems and radar sensors additional instrumentation. Fact: If you want to drive autonomously must have installed more instrumentation. It is nice during the test drive but see what technology will actually evaluates. So who’s afraid that all the cameras, for example, film everything is wrong. The camera image is converted and the system detects incoming vehicles crossing vehicles and vehicles that take us in one direction and evaluates them with red, yellow or green. By the sensors hazards are identified and then banned by the technique.

The system is not working perfectly, he braked, he accelerated to different extents and the gaps – for security reasons – currently not be large enough.

But: It works! Such a system could in the future e.g. the unsightly lines take on Mastering the city traffic, traffic jams take the right exit, etc. and then we leave the wheel when we want it. Want. Good point: I want to be as a technique? Yes! I do not want the fully autonomous, of which I would like to acquit me, because I think and I like to distract myself. But I want a system that can take over for me when I am no longer able to do so. I do not mean that I sit behind the wheel drunk, no – I mean there rather other services such as myocardial infarction, atrial fibrillation, a cough / asthma or sneezing attack, the migraine attack and what else can come.

There are so many moments in which one is not quite 100% with the views and thoughts on the road. How cool it would be if you please, if the vehicle itself slows down, dodging, refurbished, moves to the side. Parking, leaving a parking space and drive in traffic. This has been going today, the future is exciting. As I’m sure, and when the researchers and developers only save lives, if only one child or dog will NOT be run over because someone was not paying attention, if only one accident is prevented by the efforts by the improved measurement technology, have the manufacturer – in the case of Mercedes-Benz – everything is done correctly.

In the US, different requirements than here in Germany. There, the lights are e.g. far behind the stop line, you may have two, three lanes to turn and often there is then there is no lines. You may use the “highways” there also overtake on the right and then the system must, of course, forced to have everything in the “eye”. Here in Germany you have to probably look much further back than on the highway could – from a purely legal – be the speed differences higher than in the US where there are strict speed limit.

I have come to understand that the car manufacturers not at all want to take the reins out of hand, but every now and then does the king but also no longer govern, then others should act and he wants to determine only the direction. So I ask myself now before the autonomous mobility. Whether we are still “know”, I do not know, but it will be like all security systems: Only expensive, then, then to have mainstream low. Only when the system is installed in many vehicles, then we can talk about the next step: The Car 2 Car Communication – which is in my opinion too exciting.