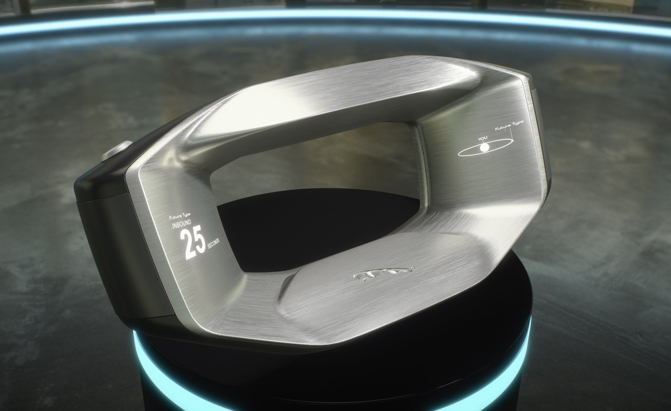 The Jaguar Land Rover Tech Fest opens its doors to the public this week on September 8, and while we’ll be attending a preview of what the British automaker has in store for lucky Londoners, we recently got word about one of its upcoming attractions: an A.I. steering wheel.

Dubbed “Sayer,” the wheel itself is still a concept, and it’s intended to be incorporated into the brand’s “Future-Type” concept vehicle. More to the point, however, is that JLR has imbued the wheel itself with artificial intelligence that is capable of interacting with its owner using voice commands, with the goal of creating a personal mobility assistant that can handle tasks both on the road and in the home. Furthermore, Jaguar has suggested that the wheel could travel with its owner from car to car within the context of a vehicle sharing service, calling it potentially the “only part of the vehicle” owned by future drivers.

If that sounds a little like what you’ve already got going on in your pocket in the form of your existing mobile phone — or perhaps an Amazon Alexa or Microsoft Cortana device — you’re not wrong. Some of the situations Jaguar envisions the wheel being involved in outside of a vehicle include functioning as an alarm clock or helping to plan a trip. It’s becoming increasingly common for automakers to duplicate existing functionality found in mobile phones within vehicles themselves (including accessories like BMW’s bulky remote access key fob), but this marks the first time a company has suggested that you actually bring a piece of the vehicle with you to accomplish tasks that you could just as easily take care of on an Android device or iPhone.

We’re also not too sure about the idea of a steering wheel that you need to own and ostensibly physically install in whatever vehicle you are driving from a rideshare service. This seems to be an inconvenient modus operandi when whatever data or functionality would be embodied by the wheel itself could just as easily be incorporated into a device with a smaller form that wouldn’t be so bulky to carry around with you. Showing up to a date with a steering wheel in your hand used to mean you were just too serious about your wannabe street racer, but in Jaguar Land Rover’s future, it means you’re frugal about vehicle ownership.

Is there more to the Sayer story? We’re sure that there is, and we’re looking forward to finding out more about it at Tech Fest later this week.