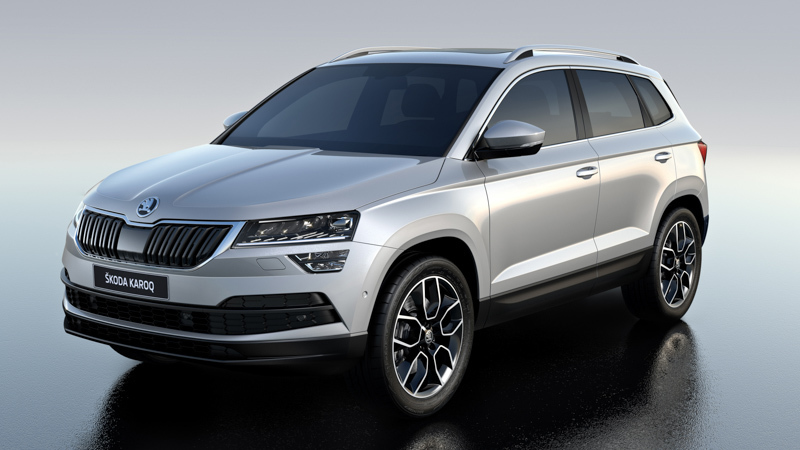 The Karoq is the third model with Škoda all-terrain body. It goes on sale in October 2017. It measures 4.38 m in length. Replaces the Yeti . With this model, Škoda introduces some unprecedented elements of equipment so far in the rest of its range, as an optional display of generous size to show the instrumentation.

Between them there are two centimeters of difference in length (the Aztec measures 4.36 m). The Volkswagen Tiguan is longer and the distance between wheels is also, so it is located between the Karoq and Kodiaq , the other model with Škoda off-road body.

The boot has a capacity of 521 liters (with the rear seats of series, whose position is fixed and fall in proportion 1/3 and 2/3), greater than all competitors of similar characteristics, although The Peugeot 3008 and the Volkswagen Tiguan (both with 520 l) almost equal it. With the folded backs to take advantage of the entire cargo space the volume amounts to 1630 liters. There are two types of rear tray, a rigid one that is fastened with twine to the gate and another of flexible opaque fabric that retracts when opening the trunk.

With the optional VarioFlex system, the three rear seats are independent and can be adjusted 11 centimeters lengthwise. Thus, in the most delayed position (the one that leaves more space for the legs) the trunk has 479 liters, and in the most advanced, 588 liters. If the intermediate seat is removed, which is smaller than the sides, they can be moved inwards to any intermediate position up to eight centimeters. They can also be extracted completely, leaving 1810 liters of cargo capacity. The impression given to us during the static presentation is that the operation of extracting the three seats is simple.

Škoda says that its breadth is “the usual” in the models of its range, ie above average (and sometimes exceptional) among its competitors. We do not have that impression. According to some measurements we have been able to do, in the rear seats the legroom is the same as in the Ateca (72 cm) and with the available height with glass roof. The same thing happens with the trunk, which has a few squares practically flat (we can measure it carefully later).

The 150 hp petrol engine has a lower consumption than the 115 hp (5.1 versus 5.2 l / 100 km). This 1.5 TSI engine has a two-cylinder disconnect system when torque demand is low (between 1400 and 4000 rpm running at less than 130 km / h). All engines are available with manual or automatic (double clutch, with six or seven gears) except the 190 hp, which is only combined with automatic and all-wheel drive. Diesel and petrol of 150 hp may have front or full-body traction.

The all-wheel drive versions have a different rear suspension (an independent mechanism with four arms instead of a wheel system pulled). For these versions an optional variable hardness damping system (DCC) is available with three possible adjustments, speed control functions on downspouts, differential locking by the brake system and a package that protects from friction and small impacts some areas of The body, a plate under the crankcase and protections for the wiring and the pipes of fuel and brakes.

With the highest levels of equipment will be a series of driving modes selector that allows to modify the response of the steering, the accelerator and the automatic transmission and the adjustable suspension in case of having them.

It does not release elements of equipment inside the Volkswagen Group but it will be the first Škoda in which the instrument cluster can be a screen. Other elements available are led lights, four multimedia systems -Swing (standard 6.5 “), Bolero (8”), Amundsen (8 “) and Columbus (9.2”); The last two have browser-, the ambient light of ten colors.

Among the safety equipment and driver support that can provide the Karoq are the parking assistant, assistant lane keeping, the active developer of speed , the detection of obstacles in the blind spot , the warning change involuntary lane-assisted steering wheel , the brake booster emergency obstacle detection , the  traffic sign recognition and pedestrian trailer or an assistant to maneuver more safely.

Škoda does not confirm whether there will be Scout and RS versions, but it does not deny it either. Yes we have confirmed that in 2019 there will be a Superb hybrid, in 2020 “an electric SUV” and in 2025, five electric models, but does not say which. The manufacture of the Karoq will begin in July 2017, on the same plant as the Ateca.

By Cheryl Chernobyl
In Skoda