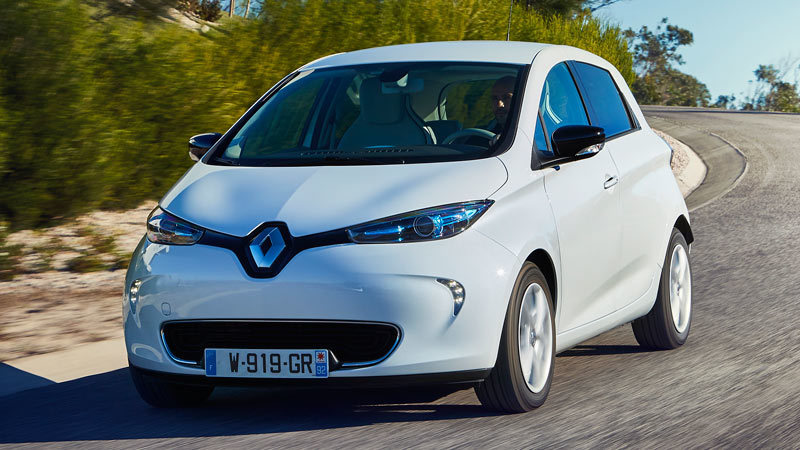 The Renault ZOE is an electric car. It is great for urban use as long as its owner can make sure that he is going to be able to charge it. This seems like a truism but you have to be very aware of it if you do not want to experience frustration after the purchase.

Its size is similar to that of a  Renault Clio , model with which it shares pieces. It is comfortable and quiet which invites to a relaxed driving although it moves with agility in the urban traffic. He shares with Clio his lights – mainly his dynamic qualities; Driving impressions – and also its shadows – the quality of its construction: because some parts are assembled, the ZOE is below most cars of this size.

It has 92 hp and two possible batteries, one of 22 kWh and, since December 2016, another of 41 kWh (these are not the only changes that have received the electrical part of the ZOE. With the battery of 22 kWh is available for 24 385 € and with the second for 26 885 €; Prices include the cost of the battery, which can also be rented, in which case the cost of purchasing the ZOE is lower.

With the battery of 22 kWh the authorized autonomy is 240 km, while with the 41 kWh reaches 400 km. As with cars that have a combustion engine, those values, although achievable, are far from those that are achieved during normal use of the vehicle. So much so that Renault, in the case of the 41 kWh battery (version called ZOE 40), says that the “real autonomy in summer” is 300 km and in winter, 200 km. That is, the brand itself gives a figure of autonomy 50% lower than the homologated (although does not say under what conditions has extracted such data, which, on the other hand, are similar to those we have achieved).

There is no other electric car on the market with so much autonomy, with the exception of the Tesla models (information Model S and Model X ), which cost three times more than this Renault, which are larger and more luxurious and whose existence Seems less reasonable. Currently there are only two electric vehicles comparable by size to the ZOE, the  BMW i3  and the  Kia Soul EV , although both have a body that resembles more that of a minivan than the one of a tourism (and the BMW only has four plazas). The autonomy of the KIA is 212 km and that of the BMW, 300 km. The 41 kWh ZOE is cheaper and has more autonomy than.

The length and width of the body of the ZOE are almost identical to those of the Renault Clio, although it is 11.4 centimeters higher. The appearance of the interior is also similar to the one of the Clio, although the occupants sit higher in the ZOE and, according to our  measurements of the interior , behind there is something less of space for the head, but more for the legs. The trunk has a volume of 338 liters, 30 more than the Clio.

The ZOE charger is integrated into the car – Renault calls it “Chameleon” -. The cable delivered by Renault is sufficiently long for normal circumstances (it is six meters in length) and at its ends there are Type 2 connectors, also known by  Mennekes . This connector allows charging the battery in single-phase and three-phase sockets and, at the same time, makes it difficult to recharge because not all charging points have it.

The recharge time of the 41 kWh battery depends on the motor. This is always 92 hp, but can be manufactured by Continental (code Q90, on request) or by Renault (R90) and depending on that, the recharge power is different. The Continental engine is somewhat less efficient (370 km range) and can charge at 43 kW; The Renault makes it up to 22 kW.

With the Q90 engine, the complete recharge is carried out in a minimum of an hour and a half (in a shot of 43 kW) and in a maximum of eight hours and twenty-five minutes in a wallbox of 7.4 kW. These times, with the R90 engine are two hours and forty minutes and seven hours and twenty five minutes, respectively.

To get out of the way, it is possible to purchase an external charger with Schuko type  sockets  (the plugs in the houses), but with it the recharge speed is much slower: if used with domestic socket (10 A), The load requires thirty and a half hours in the Q90 version and twenty-five hours in the R90.

To use the “Chameleon” ZOE charger housing must be installed next to the place where you will park your car a device called “Wall-Box” which costs approximately 1,000 euros. And, furthermore, from what we have verified during the test, the ZOE is very sensitive to the state of the installation. In fact, we have had problems loading it both in public recharging points (in four out of five we have tested), as in our own.

Price, equipment and rent of the battery

The price of the Renault ZOE with the battery of 22 kWh is 24 385 euros and is only available with a level of equipment called Entry. With the battery of 41 kWh is for sale from 26 885 euros (equipment level Life 40, which is identical to the Entry but with different name to distinguish them by the different battery). In these prices includes the discount of 5500 euros that Renault gives to the ZOE pending the approval of the MOVEA 2017 plan, of which at the moment there is only one draft. Of the MOVEA plan that is no longer valid .

In addition to the Entry and Life 40, there are two other levels of equipment: Intens 40 and Bose 40. You can see the differences between the four levels of equipment. Before the changes of late 2016, the ZOE range was composed of three levels: Life, Intens and Zen.

The ZOE\’s standard equipment includes, among others, the following elements: stability control, automatic climate control, programmer and speed limiter, electric exterior mirrors and the R-Link system with 7-inch touch screen and navigator. The R-Link system combines the controls of the radio, the mobile phone connected via Bluetooth and the navigation system, among other things .

With the update of December 2016, Renault added two new features: ZE Trip, which facilitates the localization of publicly accessible recharging points in Europe from the R-LINK navigation system; And ZE Pass, a means of access and payment to recharge points that compares the price of recharges at nearby stations, allows them to be used without the need to purchase each operator\’s bonuses and pay the recharge through a mobile application ( The latter is still not sure to be available in Spain).

There are more items available to extend the standard equipment such as access and keyless start, automatic lighting and wipers, rear electric windows and 17-inch wheels. In addition, there is a fragrance diffuser, an air ionizer and a contaminated air sensor on the outside (which can automatically activate the air recirculation system).

It is important to keep in mind that when buying the ZOE the battery can be bought or rented. In the latter case, the starting price is 7500 euros lower (they do not appear on our tokens because we publish the price of cars without ancillary fees). In the form of rent, the battery is owned by Renault, which allows its use through a contract. The signature of said contract is made at the time of purchase of the vehicle, has a duration of at least one year and is automatically renewed at the expiration date. It is not possible to terminate the lease and maintain ownership of the vehicle. The only way to end the contract is to change the ownership of the vehicle.

The cost of the rent varies depending on the annual mileage (the duration of the contract does not influence). The minimum cost is 69 € / month for 7500 kilometers per year (59 € / month for the same mileage with the 22 kWh ZOE). If at the end of the contract the established mileage has been exceeded there is a penalty and, if it has not been reached, a bonus. Renault offers a solution called “ZE RELAX” which consists of the payment of 119 € / month and there is no mileage limit.

Under the rental mode, the batteries have an unlimited warranty and are replaced at no additional cost when their carrying capacity is less than 75% of the original value. In case of buying the battery, the guarantee is 8 years or 160 000 km, whichever comes first (this warranty covers the replacement of the battery in case its load capacity is less than 66% of the original value) . The warranty for the electric motor is 5 years or 100 000 km (again, whichever comes first) and the rest of the vehicle is 2 years. The Renault ZOE is manufactured in the same French production line as the Clio (located in Flins).

With or without battery rental, the ZOE is a more expensive car than another equivalent by power and size with a combustion engine. For example, a Renault Clio with 90hp TCe petrol engine and Wolfnoir Energy equipment level (the highest in the Clio range) costs 16,053 euros, while the ZOE with the Bose 40 level, the highest, costs 31 48 euros, or 23,725 € opting for the rent.

In certain autonomous communities electric cars have certain advantages. For example, in the city of Madrid (on request) are exempt from paying in regulated parking spaces with schedule.

By Cheryl Chernobyl
In Renault