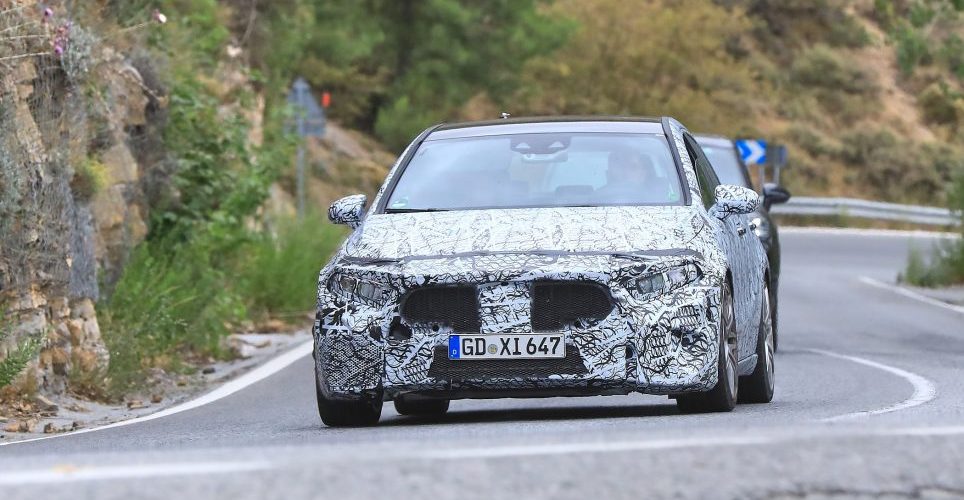 Started in its fifth year of commercialization, the Mercedes Class A already slips quietly towards retirement. His descendants are sharpening the weapons and especially his version AMG, which is waiting for one thing: to fight with the pretentious Audi RS3.
Mercedes has been actively working for the fourth generation of its compact, the A-Class. A few weeks ago, the CEO of the Daimler Group, Dieter Zetsche was proud to be a smartphone The hand, with a still camouflaged copy of the future compact to the star, the time of a selfie.

Today, we are interested in the sports version designed by the AMG high-performance division. Our spies have indeed spotted a prototype during road tests for the first time. If the line of the future Class A will always be so muscular, no doubt that this is indeed its variant doped with hormones. It is recognizable thanks to its widely widened wings, its largely ventilated shield, its dual exhaust (not factitious) and its imposing rims giving glimpses of disc brakes of generous size. Aesthetically, the future A-Class, and thus this version Mercedes-AMG A45, will adopt the new stylistic language initiated by the brand with the study Concept A Sedan ,

Scheduled for 2019 (with a presentation in the course of next year), the future A-Class, and thus this A45 AMG version, will be based on the new MFA2 home platform, developed in partnership with the French cousin Renault. Lighter, it will allow this athlete to take more care of its dynamic behavior, its consumptions and prove to be more powerful than ever. With 381 hp, the current generation is already one of the most powerful compact in the world. But since the audacious Audi has dared to offer 400 hp in its restyled RS3 , it seems inevitable that the future A45 AMG goes even further.