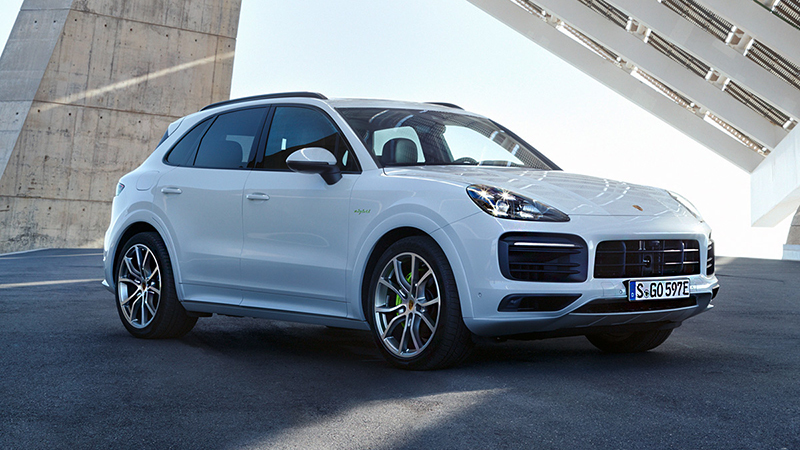 This version of the Cayenne has a plug-in hybrid propulsion system consisting of a gasoline engine and an electric one that, when operated together, give a maximum power of 462 hp. According to Porsche, in electric mode the autonomy is 44 km and the maximum speed is 135 km / h. It is already on sale from 93 309 euros . The price is between the access version (Cayenne: 340 HP and 87 579 euros) and the Cayenne S version (441 HP and 107 127 euros).

The gasoline engine has six cylinders placed in vee and gives 340 HP, while the electric has 136 HP (40% more than the model it replaces). The battery has 14.1 kWh capacity, is cooled by liquid and is located under the floor of the trunk, so it loses some cargo volume (it has 645 liters compared to 770 Cayenne and Cayenne S, Cayenne turbo has a trunk of 745 liters). Porsche has approved an average fuel consumption of between 3.2 and 3.4 l / 100 km (varies depending on the tires fitted) according to the NEDC approval cycle.

According to Porsche, it is possible to fully recharge the battery in just under 8 hours through a 230-volt, 10-amp socket. There is an optional charger of 7.2 kW (736 euros) that allows to reduce the recharge time: 2.3 hours in a 230 volt outlet with 32 amps. As with many alternatives, the charging process can be managed through the integrated multimedia system of the car or through an application for mobile phones. This allows to perform habitual functions, such as activating the remote air conditioning system, with the ignition off.

In addition, Cayenne E-Hybrid users will also have access to a function through which it is possible to recharge the battery in public recharge stations of different providers without it being necessary to register in each one of them. This allows, for greater convenience, that the invoice is processed through the Porsche ID account, a computer service associated with the multimedia system for the individualized management of the vehicle.

There are several driving modes that, among other things, affect how power delivery occurs and how the battery is recharged while driving. In the most sporty modes (Sport and Sport Plus), it is possible to use, according to Porsche, practically all the energy of the battery for propulsion. When driving using the Sport mode, the management system recharges the battery (with the heat engine) enough for a moment of extra propulsion. In Sport Plus mode, the battery is recharged as much as possible to offer the highest performance continuously. In the other modes, the vehicle manages the hybrid system to achieve the lowest consumption. We have already driven the Cayenne E-Hybrid:

The gearbox is the same as Porsche used in the rest of the Cayenne range; it is called Tiptronic S, it has 8 relations and it is of the torque converter type . The traction is on all four wheels and is distributed by an electronically controlled multi-plate clutch. The separator clutch of the hybrid module is now electromechanically operated to improve the response time, unlike in the previous model, which had electrohydraulic drive.

In the E-Hybrid the active suspension (PASM) is standard. As in the rest of the range, except for the Cayenne Turbo version, the air suspension is optional. With the Cayenne E-Hybrid, Porsche introduces some optional equipment elements into the Cayenne range that were not available until now. This is the case of the information system projected on the windshield (Head up Display, 1488 euros), seats with massage (from 2045 euros), heated windshield (484 euros) and 22-inch alloy wheels.