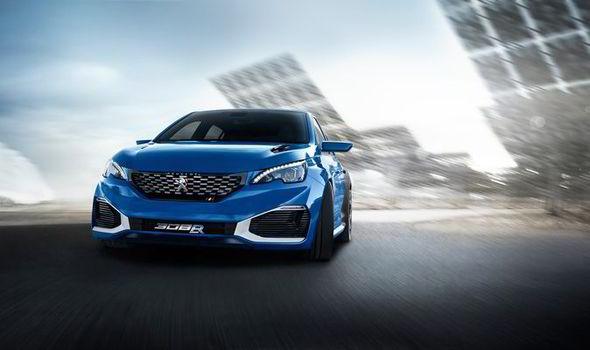 Through a teaser video, Peugeot has announced the arrival of a new concept supercar! Peugeot Surprise! While it has unveiled a Peugeot 308 R Hybrid 500 hp and 730 Nm of torque at the Shanghai show, the French manufacturer confirmed and signed in the field of sportsmanship today announcing the arrival of a new supercar! The firm has indeed released a teaser video in which Gilles Vidal, director of the Peugeot style, unveils the very first sketches and the first images of a new concept car. Peugeot 308 R Hybrid

In the footsteps of the Onyx?

Marrying “the codes of the great GT, the supercar, sports and prototypes” according to the executive, this mysterious machine that appears veiled seems strongly resemble the Onyx concept presented in 2012 at the Paris Motor Show . The beast devastating look was then animated by a hybrid V8 3.7L HDi FAP 600 hp (80 hp with HYbrid4 technology)!

The virtual Peugeot for Gran Turismo 6?

What will it be this time? The mystery should be lifted in the coming days. Meanwhile, one of our readers, the Gt6fan occurrence (thank you to him!) Has hypothesized that seems very credible: it may well be there the virtual concept Vision Gran Turismo Peugeot created especially for the video game Gran Tursimo 6 on Playstation 3.

The 308 R Hybrid certainly doesn’t look like the standard car. A wider track makes it look like it’s hunkering down on the road and this is enhanced by louvres on the bonnet, a grille with a special chequered pattern, side scoops with LED indicators, plus a blue paint job that has been developed using fluorescent pigments and glass particles, which suddenly morphs into matt black at the rear. Also at the rear, there’s a narrow spoiler at the top of the tailgate, designed to reinforce the car’s aerodynamics, and twin air scoops in the bumper to help keep the battery temperature down by drawing out the hot air.