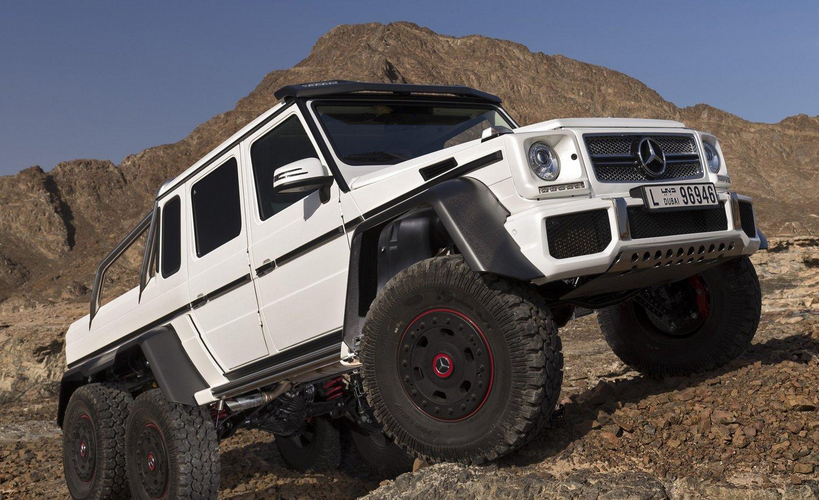 You even look down on Range Rovers in this Mercedes G63 AMG 6×6. Now, we have been thinking long and hard what to do with this car. We could jump from dune to dune. We could drive through a swimming pool. But that has already been done. So we came up with the idea to drive this Mercedes G wagon. This six wheel drive car, through Amsterdam and see what people think of it.
Almost six metres long. It weighs almost 4000 kilograms. And costs 380.000 euro before taxes, which will raise the price a little bit, because it emits quite some CO2. It has the new V8, a 5.5 litre, with two turbo’s. And if you think: it won’t get any sillier.

But it can, because there is also a Brabus version, which is 100.000 euro more expensive but even has 700 horsepower. Brabus already sold ten. As far as this car is concerned, Mercedes will build as much as they can sell. And they have already sold quite a few. But Mercedes won’t tell how many.
We’ve got five differentials. Over there, there, there and there another two. And then the tires they are filled with air obviously, but also have an inflation system. You can press some buttons in the interior and the tires will deflate. Why would you want soggy tires? Well, if you are driving in loose sand you will have more grip. And if you want to inflate them again, when you come out of the desert you just push the buttons again.

Air that is stored in these tanks is forced into the tires so you can drive on the public roads again. And then, if you really push it, I mean, it still is an AMG. The fuel consumption is pretty hefty. But we have two fuel tanks. Twenty centimeters wider, on the other side as well. Which adds up to a total width of 2,2 meters. This is made of carbon fibre which saves weight.
The extended G is only 1200 kilo heavier than a normal G AMG. And it has a space saver that will really get you home. This is the most idiotic car of 2014, it won’t get any crazier anytime soon. And then you ask yourself: Why a V8 with 545 bhp? Mercedes also has a fine twelve cilinder engine with two turbo’s and more than 600 bhp which will fit in an AMG. But not in this long version simply because it will run hot.

The car is too heavy, the engine gets hot and Mercedes couldn’t get the temperature management right. And so you just have to make do. 0 to 100 km/h in 6 seconds.