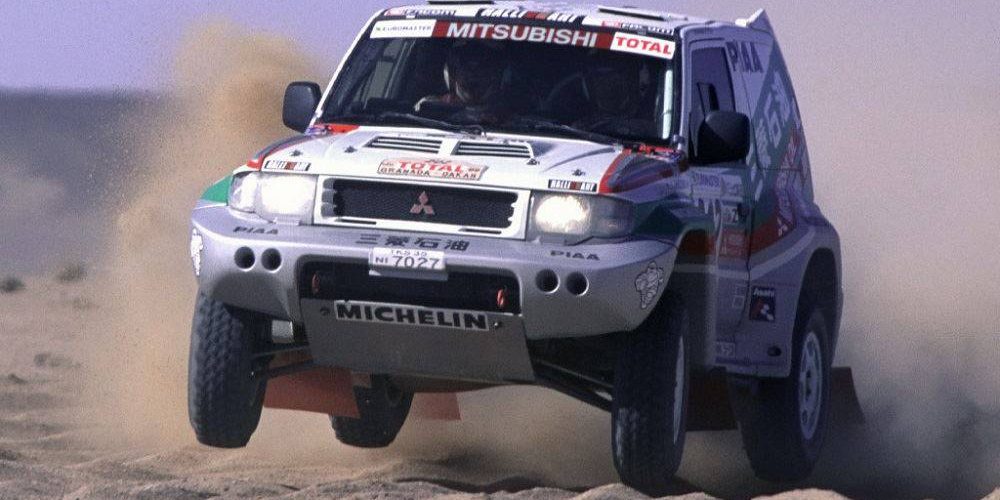 Mitsubishi already becomes a reference in 4 × 4 vehicles, but it had not yet established itself as a major force in the Dakar rally in the early 1990s. That’s why the Japanese decided to make a new Pajero-based racing car to compete in the T2 category the most challenging test in the world. Mitsubishi Pajero Evolution

There was only one obstacle: the obligation to produce passenger cars to complete the homologation process. Pajero Evolution was born.

The 3.5-liter 24-valve V6 engine jumped from the original 208 hp to 280 hp and earned an unimaginable snoring for a Pajero. The maximum torque was 30.6 mkgf of the conventional Pajero for respectable 35.5 mkgf.

The sequential automatic transmission was reworked, earning shorter couplings – rumors indicate that Mitsubishi even contemplated adopting the manual gearbox, but would have given up for fear of suffering with new durability problems – as had already occurred in Lancer Evolution . The Super Select traction system allowed the vehicle to be configured only as a rear wheel drive and had a differential lock option.

Other details deserved special attention from the Japanese engineers: the body was quite broad, the rear won fancy aerodynamic appendages with Batmobile face and the seats manufactured by Recaro are specific for competition. But no accessory was as tacky (and charming) as the para-pimps.

Of all the specimens manufactured in Japan, only 10 would have come to Brazil, according to Mitsubishi’s own estimate.

The majority of the vehicles have been converted to participate in competitions, and there is only one copy in a practically original state (only the seat covers in leather instead of fabric do not fit the factory specifications) kept in the collection inside the Velo-Città racetrack , in São Paulo.

The changes took effect and the Pajero Evolution dominated the 1998 race, winning the first three places in the overall result – beating even the fastest cars in the T3 category. The superiority of PajEvo (affectionate nickname given by model enthusiasts) is even more evident when we remember that the fourth place would have crossed the finish line five hours after the third Mitsubishi.

Of the 10 units that would have come to Brazil, only this unit would not have been modified (Alexandre Battibugli / Quatro Rodas)

Pajero Evolution wrote its name in Dakar history, winning two of Mitsubishi’s 12 titles in 37 editions of the most difficult rally on the planet.