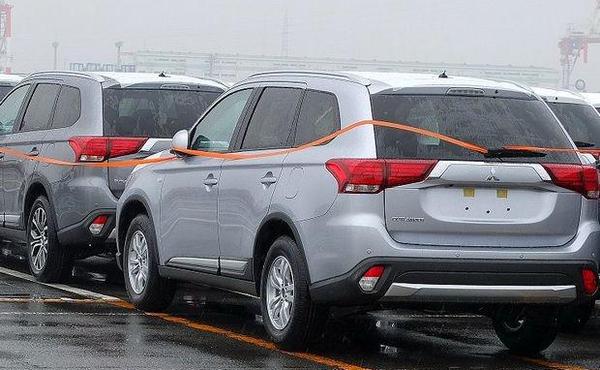 At Mitsubishi , the Outlander is about to undergo a major restyling (a second) to give his SUV, a more aggressive face, more in tune with the times. This restyling prefigured by the concept shown in Paris is ready to be marketed as shown in these images of car parks where already waiting dozens of models.

Since the unexpected Paris concept which one does not know what he announced (new model or restyling), things are progressing and the Brazilian website Carplace aired footage of a car new car ready to embark where we discover a whole new Outlander adopting the front and rear unpublished. In detail, we note some adjustments during the transition to the series but the key is there with crosshair grille Toyota way that seems to become a distinctive element which is found on all upcoming Mitsubishi. The biggest change is in the back with the disappearance of the band between the fires so pleased Lionel Lucas! Instead one finds an adaptation, a sort of mix between the current version and the concept is very red light spilled out onto the tailgate connected here by a chrome arch overlooking the brand logo.

The rear bumper was extensively remodeled and houses its reversing lamps and vertically fog (slightly tilted) at the ends while large rocker appeared.