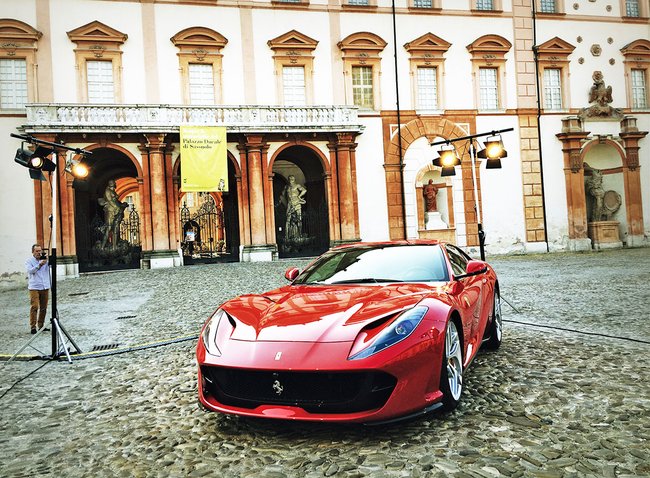 There will never be enough adjectives to qualify the performance and the technicality of the new muse of Maranello! The Ferrari 812 Superfast presented at the last Geneva Motor Show last March is simply the Ferrari V12 engine with the most powerful engine ever produced by the Italian wizards of Maranello … A galloping test, the replacement of the F12 Berlinetta, in the Kingdom of Cavallino.

Maranello (Italy) – From our special

correspondent The Ferrari 812 Superfast transcribes with disproportion a universe borrowing superlatives. Ferrari is a regular of the kind with vocation in the exercise of ultra-sporting to go ever farther, always stronger. It is the quintessence of the organ of Maranello: to sublimate, to move, to dazzle …

The Ferrari 812 Superfast is simply a GT whose existence could not have been imagined only a few years ago. With now 800 hp under its long front hood, which is 60 hp more than the V12 of the F12, it puts in some way an Enzo, for example, more than 140 chs apart!

But the Ferrari 812 Superfast also crosses a course in the world of Grand Tourism. It revolutionizes the idea as it bites the soul and functionality of a hypercar, both in power and technicality, while preserving a style of GT with forward engine and the affirmed character of a beautiful Italian.

His strength ? Obviously its design since the style had to take into account all the aerodynamic constraints that the 812 causes at high speed. The design of this GT serves above all functionality. Spoiler, diffuser, vortex, removable blades under a flat bottom and in some extractors, the 812 plays with air constraints reducing by 20% the drag at high speed compared to its predecessor. The designers have succeeded with the aerodynamicists to integrate in the design of the entrances and exits of air, discrete but essential, to cool and to evacuate.

Unprecedented, its gaping mouth, wide open and smiling, participates fully in the aerodynamic function, idem with this “fast back” roof, very inspired, which includes notches at the joining of the bonnet engine to reject the air more easily while ensuring the support on the rear axle …

The performance of this car can not be assured without the help of its atmospheric V12, unprecedented to 75%, compared to the F12. The cylinder capacity increases from 6.2l to 6.5 liters to culminate in spectacular regimes at 8500 rpm. 123 hp per liter, a feat! The 12-cylinder is just a new mechanical work of art, of which only Ferrari has the secret, but for a front engine, it is much more refocused to the cockpit than it seems.

The Magic of Performance

Of course, the Superfast is as comfortable on the track as it is on the road. A new and particularly astonishing homogeneity. Superfast, yes, super-crazy too, to drive, super-smile acceleration but super-saving braking! A super-rare toy for spoiled children.

The V12 rings the charge of the light brigade; the lightness being moreover, in her, a leitmotiv of dynamism. Nothing seems to stop him. At no time, at the wheel, we feel its weight, 1.630 kg, despite its beautiful measurements. Simply look at the numbers to validate its crazy velocity: Impressive, the power of the engine, 80% of the torque, is available from 3000 rpm.

The 812 generates on circuit a phenomenal power with exceptional lyrical flights. The bar of three seconds, now the standard of the supercars, is crossed: 2.9 s exactly to reach the 100 km / h, less than 8 seconds to touch the 200 km / h. The maximum speed is 340 km / h!

And what about the speed of the F1 7-speed gearbox, again, improved. It gives the tempo, without blows, to the speed of a single-seater.

The comfort of a GT

There is no change in open roads: sensations and behavior identical. Without however reaching unseen speeds contrary to the gendarmes and … your driving license, the 812 Superfast was seen without brutality but with endless energy. You just need to know how to handle its explosive explosion.

Life on board gives change and comfort, very appreciable, pamper your back and excite your retina. The universe of the dashboard, very horizontal, is simply magical. The transcription of a true sports car, Italian, between modernity, and performance. A Ferrari, what!

There is even a front passenger who can take advantage of the main tachometer and speed information on the screen in front of him. The content is more than successful, the Transalpine GT gives an absolute strength, with the focus on Ferrari, to attract new customers. 4 out of 10 buyers will come from the competition, for obvious reasons, its performance.

Afterwards, it must be admitted that the car will trade at 287,424 euros, a nice sum, which will be, by the lucky buyer, largely exceeded. Indeed, the “superfasters” will spend between 30 and 50 000 euros of additional options. Let us console ourselves, for once, because we are still very far from the amounts evoked in the universe of luxury yachts! But the fact remains that thanks to the “Taylor Made” ultra-customization program, created by Ferrari, for its privileged customers, the price of the car can be doubled very, very easily!

By Cheryl Chernobyl
In Ferari